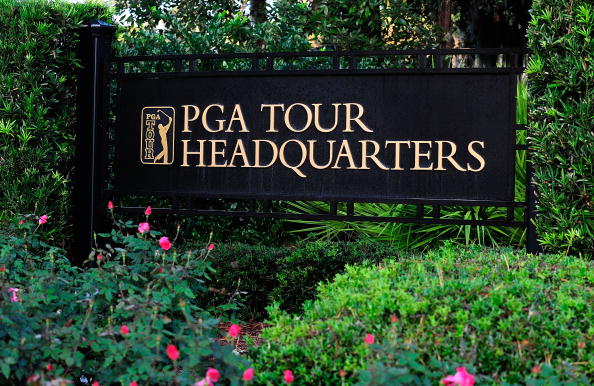 The latest big rights deal is a “same as it ever was” one, except with the broadcasters in question paying much more than they were. John Ourand of Sports Business Journal reported Monday that the PGA Tour has agreed “on the broad terms” of rights extensions with CBS, NBC and Golf Channel. There’s no official announcement yet, as there are some minor sticking points remaining (and the digital rights are still being negotiated), but the main TV deals here appear largely done. From Ourand’s piece:

Nothing has been signed yet; but the Tour and networks essentially have agreed on terms with only a few minor sticking points remaining. The PGA Tour did not take the short money here, opting instead for long-term deals that will run for nine years from 2022-2030. By early estimates, it’s likely that the PGA Tour could bring around $700 million per year with these new deals, compared to its current deals that were worth around $400 million.

CBS and NBC essentially will keep the same regular-season packages. The big difference will be seen with the FedEx Cup Playoffs. CBS and NBC will produce all three playoff tournaments, including the Tour Championship, in alternating years. As part of the nine-year deals, NBC will carry the playoffs five times and CBS will carry them four times. Previously, NBC and CBS shared these rights, with NBC producing most of them each year.

An interesting part of that comes from Ourand’s report that Golf Channel’s cable rights fee will more than double under this new deal. That’s logical, considering that the past deal was signed in 2006 and live sports rights have gone through the roof since then, but it will still be worth keeping an eye on how that works out for Golf Channel. Those rights are critical for that channel’s success and for its carriage, but it’s now paying a lot more out without getting further content. Maybe they had to do that to avoid the fallout that would have come if they had lost those rights, but this does pose some potential issues for Golf Channel’s bottom line. Of course, that network is owned by NBCUniversal, and there are potentially ways to balance that out across their properties, and this is still maybe a better problem to have than trying to run a “Golf Channel” without live rights. But their costs just increased significantly without an obvious corresponding potential increase in revenue.

Another notable element here is how the PGA Tour decided to stick with their current rights partners and to sign a long-term deal. There isn’t much of a consensus out there on where rights fees are going in the short term (some argue “Tech bidders are going to escalate everything in a few years!”, while others note that tech companies really haven’t shown that much interest in exclusive top-tier rights, and that some have specifically said they’re not interested), and that’s led to some leagues signing short-term deals to try and cash in more  down the road. But other leagues have locked in for longer periods, and that could also work out for them if rights fees don’t continue to balloon.

What’s also significant about this report is the discussion of how the digital rights have not yet been decided. The digital rights are currently held by NBC with PGA Tour Live (they signed a deal for that in July 2018, shortly after PGA of America CEO Pete Bevacqua became president of NBC Sports Group), but Ourand writes that ESPN has made an “aggressive play” for those rights (which would head to ESPN+), and that Discovery (which holds the international digital rights) is also “a serious contender” (and that they have the potential to share those rights with NBC Sports). We’ll see where the digital rights land, but there’s at least more potential there for some kind of shakeup. On the TV side, this looks very much like it will be business as usual, albeit with the networks now paying more.