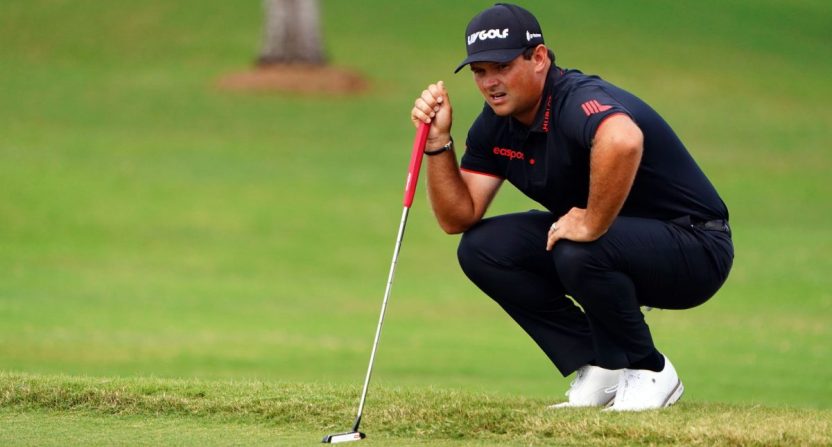 Patrick Reed’s defamation lawsuit saga continues with what might be the most absurd twist yet.

That’s really saying something for a story that has been fully absurd from the start, with Reed going after Golf Channel and analyst Brandel Chamblee over cheating allegations before adding an array of new parties, all in service of a legal effort that seems even in the most charitable interpretation to be wildly suspect.

Now, Reed has added New Yorker writer Zach Helfand to his list, thanks to this article from October. Reed’s legal team alleges that Helfand made up an anonymous quote in the article, which is hilarious because the piece links to the tweet it’s referencing: a joke from an anoymous golf Twitter burner account, @Deep_Fried_Egg.

Patrick Reed has added Zach Helfand from the New Yorker to his defamation lawsuit.

Reed alleges that Helfand quoting an anonymous source "evidences probability" he made the quote up.

This, of course, is hogwash. pic.twitter.com/QpYd4EbNmu

You’ve got to be fucking kidding me

As I have always said, Patrick Reed is a very good person and golfer and he has never done anything wrong. https://t.co/50DXg4YLiN

(Also, if you’re somehow wondering: no, deepfriedegg is not New Yorker writer Zach Helfand, which almost everyone but Reed’s legal team apparently knows.)

This whole thing is just perfect, right down to Reed’s recently refiled complaint essentially functioning as a litany of self-own.

“Mr Reed has become, not by choice, but due to media-driven narrative, a “lightning rod” and therefore a frequent target of the defendants and others in the media in order to defame, disparage and harm LIV’s and other golfers and LIV as a whole.”

“It is clear that defendants are not interested in the Saudi PIF, Mohammed bin Salman, or any human rights atrocities.

“They are basely attempting to associate Mr. Reed and LIV with human rights atrocities in order to destroy their goodwill and reputations and harm them financially in order to eliminate LIV as a competitor to the PGA Tour and DP World Tour.

“This is about money and power. [The] defendants could care less about actually shining a light on human rights atrocities.”

Again, this is the all from the legal team bringing complaints that suggest a New Yorker writer fabricated a quote that was linked to directly within the article. It’s truly something.

In all seriousness: P-Reed needs to be sanctioned, and his attorney should be disbarred. And every defendant should be counterclaiming for abuse of process.* This is absurd.

*If you have a damages claim against P-Reed, then SLIDE INTO THESE OPEN DMS

At a certain point the Reed lawsuit train will come to a halt (probably with prejudice), but until then, who knows what’s going to happen?