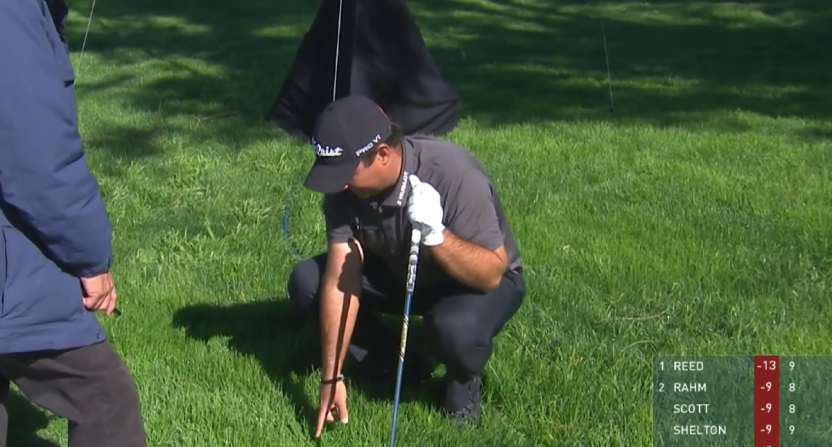 Minutes after CBS introduced their new golf rules expert, Patrick Reed did what Patrick Reed tends to do: flirt with blatant cheating.

That’s not a fun way to start your gig, but the expert in question, current PGA Tour official Ken Tackett, didn’t exactly rise to the occasion, either, providing no real pushback to Reed’s actions and assertions. Tackett is part of the broadcast coverage now thanks to CBS making some changes to their presentation. It makes sense on the surface; golf has a few very intricate rules, and they’ve certainly come up often in recent years.

Tackett himself was part of Bryson DeChambeau’s meltdown last summer, a clip that played as Jim Nantz introduced Tackett to the coverage.

Minutes later, tournament leader Patrick Reed hit a shot from a fairway bunker that bounced once before ending up in the rough. When cameras next saw Reed, he was kneeling over the spot his ball had ended up, asking for an official for a ruling on whether or not it had embedded in the very thick rough that he clearly didn’t want to hit from. Reed, of course, is perhaps best known for his very flexible relationship with the rules, having been caught on camera cheating last winter, along with a long history of shady to downright abhorrent behavior.

He should get no benefit of the doubt from anyone, but you wouldn’t know it from how Tackett reacted on-air. The key point today: Reed had picked up his own ball before the official even arrived, asking the world to, essentially, trust him that it had embedded to the definition of the rule. Sure! That makes sense! Not shady at all! Tackett did allow a “He got ahead of himself”, but offered no other pushback. The actual official involved on the course also sort of had to just go along with what Reed was pushing as the narrative.

Here’s the entire hole, as it aired originally:

Here's Reed on #10 from the time he hit his approach. Decide for yourself. pic.twitter.com/pHQSF3ly9T

CBS, though, had that replay of the ball bouncing originally, and then softly landing nearby. It’s incredibly, incredibly hard to imagine that sort of landing resulting in an embedded ball; surely, if the ground in that area was soft enough to allow it to happen, it would have just embedded when it landed from much higher up, no? Indeed, Reed notes himself that it “didn’t bounce”, when it clearly had. He might not have seen it bounce, sure, but if you’re not sure, why would you pick the ball up from the “embedded” position?

Seems like the laws of physics wouldn't allow a 1.6-ounce object to embed from 3 feet off the ground unless you, like, dropped it in a swimming pool. https://t.co/6fD7uXCymE

A next level workaround to the “I guess my name needs to be Jordan Spieth” problem is to just start picking the ball up and adjudicating rules decisions yourself.

CBS brought Tackett back in, and Nantz and Faldo pressed him on the video demonstrating the ball bouncing. Even so, he stuck to most of his original analysis, and certainly never mentioned potential cheating.

When even a booth like Jim Nantz and Nick Faldo is aghast at what’s unfolding, you know something is going wrong. Here’s Nantz, clearly not buying what Tackett was selling, noting that it isn’t a good look for anyone:

The amazing part is that Tackett is giving you incredible insight into the spine of PGA Tour rules officials. Incredible transparency.

Nantz, Faldo, Frank Nobilo, and others were clearly unhappy with how this played out, and it was fascinating to watch the dynamic unfold of a new rules expert peddling a narrative that goes against what we were obviously seeing, in service of defending a player who by now deserves no such consideration.

This wouldn’t happen if CBS had gone with a more independent voice, but then again, it’s possible they didn’t have an option. The PGA Tour pushes a lot on broadcast partners, and given the control the players have over the organization and the players refusing to allow for anything that might paint them in an unflattering light, we got a glimpse of just how people like Reed can get away with things like this.

And that’s bad! Especially for gamblers; Reed’s leading the tournament, after all, and that could have been a huge swing. Instead we have an on-air expert telling us he did nothing wrong as the broadcast booth insists that, no, something was indeed wrong. Credit the CBS crew for not simply endorsing Tackett’s comments, too; it would have been easier for them to handwave it and move on, but they clearly recognized what was happening and reacted accordingly. That’s good work.