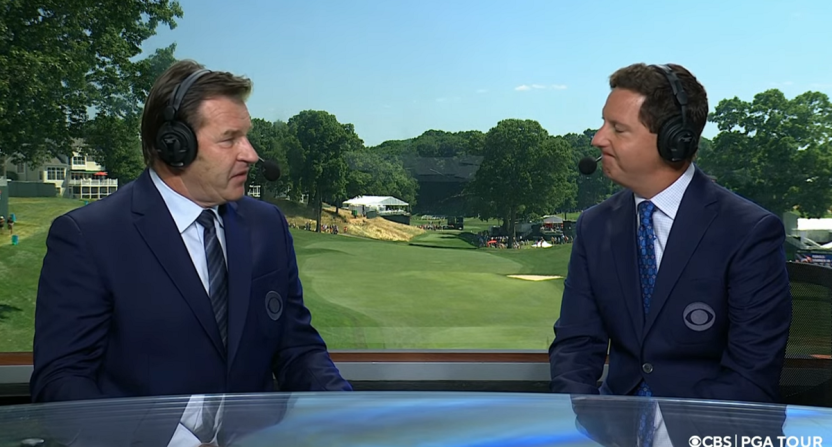 Faldo addressed that news at the top of Saturday’s broadcast at the Travelers Championship, but those remarks actually followed a bit of discourse about LIV Golf and the PGA Tour’s response this week. The Tour announced increased purses and new big-money events in the face of the ongoing threat from LIV, the Saudi-backed sportswashing effort that poached Brooks Koepka this week ahead of their second event in Portland.

This site has never been very kind to Nick Faldo, whose sleepy analysis and penchant for gaffes has done little to help presentation through the years. Today, though, Faldo was very much on point, first getting in a dig at Sergio Garcia and then wondering why Koepka, who has in the past professed disinterest in everything aside from true competition, would make a move to a new league that is anything but competitive.

Thanks to Geoff Shackelford for that clip, which actually cuts off just seconds before the money quote.

“The other very important thing is enjoyment. You’ve got to enjoy what you do in life. You can’t be standing on the golf course and thinking ‘I don’t know the reason why I’m out here.’ You just can’t fake that. It’s an important thing in life to know what you’re out there for, and you think ‘I love this. I really love it.’ And I cannot see how these guys right now think it’s a serious challenge.”

Faldo’s point is an excellent one (and he gets bonus points for singling out Sergio Garcia, too.) LIV, as it currently stands, is very much not a legitimate competition. It’s money laundering but for human rights.

Watching some of the inaugural event in London a few weeks back, it was very clear that the golf competition aspect was tertiary at best, with fans literally asleep in the stands, no television distribution, and a team element that’s so haphazardly put together we’ve already seen rosters and captains change without explanation.

always reminds me of a bar's upcoming events/specials calendar

It’s been fascinating watching how various PGA Tour broadcasts handle the LIV incursion. For a while they didn’t really touch it at all, but now that some of the bigger names on Tour are bailing (Koepka was originally slated to be in the Travelers field this week, for example) they’ve been forced to address it more often.

Faldo coming out critically on the air here is also fascinating, as he himself was forced to address speculation that he was leaving CBS for LIV. It shouldn’t be much of a surprise that he’s not, though, given his longtime foe Greg Norman is LIV’s CEO.

CBS is also obviously a partner of the PGA Tour on a new rights agreement that kicked in this year, which the Tour is certainly keen on protecting in the face of possible talent defections. There are a lot of moving parts here.

In the end, though, Faldo’s main point is a sound one. Top players are taking big money to essentially end their careers as relevant stars, barring LIV somehow emerging as the dominant force men’s golf. That seems, at best, years away; they have the endless pool of money to do it, but in a world where LIV bleeds the PGA Tour dry, it’s hard to see golf surviving as a relevant sport anyway. That’s what sucks so much about all of this for golf fans.

Kudos to Faldo for calling this out in a way that really hits on the points that matter.