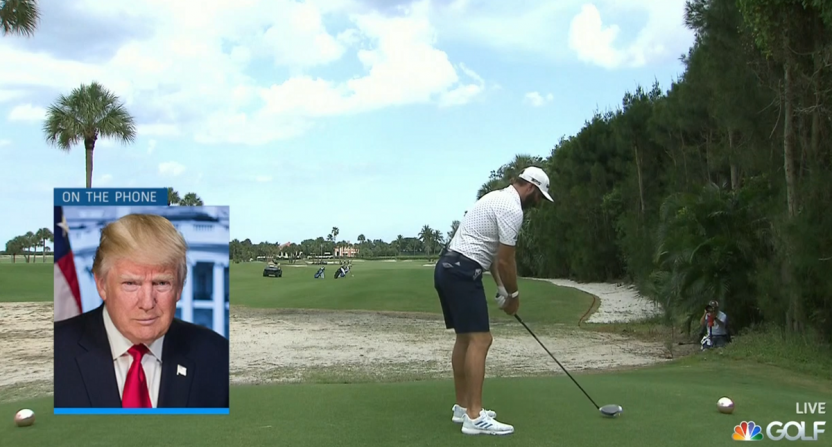 Featuring Rory McIlroy, Dustin Johnson, Rickie Fowler, and Matthew Wolff, the event promised a welcome sight for golf fans, and an option for sports (and sports betting) for general sports fans craving something, anything to focus on. With players wearing live mics, abundant shot tracer, and a beautiful oceanside setting, there was potential for an escapist, immersive viewing experience.

That didn’t happen, for a variety of reasons. NBC elected to go with nearly a full complement of analysts, despite there only being one group to follow. And if the analysts are going to be on the broadcast, they’re going to talk, which means we lost a lot of the live mic component, or worse, had everyone talking over each other. It led to a shaky, disjointed feel at times.

The amazing part of this thing is they got all of the hardest stuff right. The course, the players, the mics… almost everything! The recipe was DIALED! And then they just threw a bunch of unnecessary ingredients on top to try and ruin it.

The event being on network NBC led them to bring in a few guests for remote interviews with Mike Tirico, including Bill Murray, Skyping in with a Dutch angle.

Murray’s interview lasted for a shockingly long time; it spanned a commercial break, to the consternation of many.

I spoke too soon. It continues as they play a superb par-3. https://t.co/cfj7g2Rk5K

this is the nba horse contest without buffering issues

Trico at the commercial break. pic.twitter.com/pKUVZyuSSN

I love Bill Murray so much and I love golf so much and every time they meet it just makes me pic.twitter.com/ZC4bdfbFMv

It’s easy to see why NBC felt like adding Bill Murray made a lot of sense for a general audience, but it’s also not why a lot of golf fans would be tuning in for this opportunity. There’s actually a fairly simple way to please both audiences, though:

Golf Channel was already simulcasting today; taking a page from ESPN’s MegaCast philosophy for college football and offering a different option would have made a lot of sense. Hopefully next weekend’s sequel to The Match can incorporate something like that.

Then, after viewers had been riled up by distractions and a lack of focus on golf, NBC brought in perhaps the person most guaranteed to take focus from golf:

I'm in awe that this is happening pic.twitter.com/AvSYbTuGUO

Exec 1: “Okay, so clearly Bill Murray was far too controversial. Who else you got?”
Exec 2: “Say no more, fam.”

Here’s what Trump talked about with Tirico:

"I know so many of the Tour players and they’re really fantastic people, I can’t think of anyone I don’t like, I can’t say that necessarily in life, but when you meet these Tour players, they’re just great people, it’s something very special."

So, yeah, that happened. The key takeaway though: the golf was too often relegated to the background. Viewers weren’t exactly clamoring for the “overproduced broadcast” element of sports to come back; they just want the sports. And then, there were key moments where we actually could have used some of that extra information, but we didn’t get it:

Pleasing everyone would be impossible, but there are some pretty easy options for coming a lot closer. Hopefully Turner learns from today; The Match II is next Sunday on TNT.