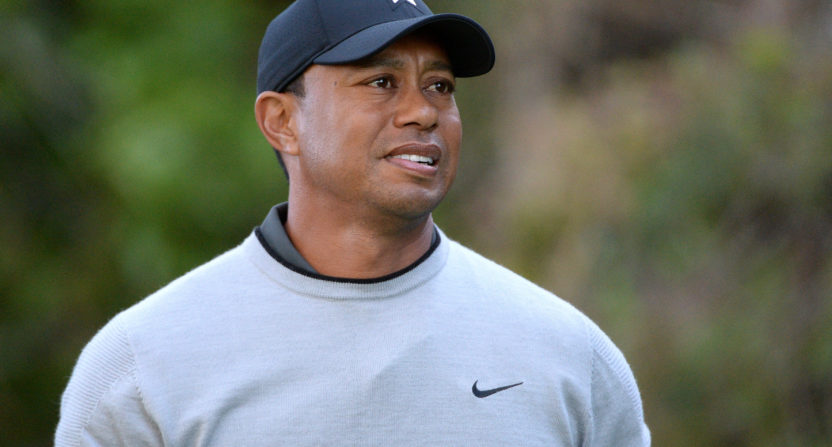 There are plenty of questions ahead about Tiger Woods’ playing future in the wake of his late February car accident and the limited updates he’s provided since then, but it’s clear he’s not looking to pivot to broadcasting just yet. On a NBC Sports media call ahead of the U.S. Open next week at Torrey Pines, play-by-play voice Dan Hicks told reporters that NBC made Woods (seen above in 2018 at the Genesis Open) an offer to serve as a guest analyst for this year’s tournament, but he declined. Here are those key Hicks quotes, via Evan Orris of The New York Post:

“Yeah, in fact, that’s exactly the line that I was thinking and we were all thinking is how good that would be, who better, if he couldn’t be there to play it, to voice it and have him a part of the show. But we were rebuffed.”

“He didn’t want to do it, and I totally understand his situation. There is a lot going on in his world right now and there’s also a part of Tiger that doesn’t want to become this, I don’t want to, for lack of a better word, a sideshow at an event where we should be concentrating on what’s happening.”

“Also, I really believe that if you said yes to something, it would just be a non-stop parade of asks, and he would have to just, you know, start telling everybody no. So, yeah, it would have been fantastic to have Tiger a part of it in that sense, but I understand that what’s going on in his world that he wanted to kind of keep it low key and stay out of the limelight for this one and just hopefully he’ll enjoy it at home watching it on TV and be inspired when we talk about what he did 13 years ago and that’s the best we can hope for.”

As Hicks says there, it is understandable why Woods declined this. There would be a big spotlight for him with guest analysis on this show. If his focus is still on rehabbing and trying to resume his playing career, he might not want that. And Hicks’ point on this opening a door is well-taken, too; Woods has only released social media updates (and done one Golf Digest interview) so far, but if he jumped into a broadcasting guest spot, that’s certainly going to lead to a lot of people trying to get him to talk more about his ongoing recovery process. And while he could still have turned down all those requests, a TV guest analyst spot is opening the public door a fair bit, and at least leading to a lot of requests to decline.

And a Woods spot might not have worked out great for NBC overall, either. Yes, there absolutely would be some interest out there in what Woods might say, and that might have lead to some elevated ratings at some points. But a high Woods focus might have distracted from coverage of the actual tournament, which certainly would have led to criticism for NBC’s coverage, and might have led to some equalizing ratings drops if those looking for tournament coverage got really sick of Woods and abandoned the broadcast. Sure, it was probably worth an offer, and it maybe could have worked out all right with a deft production touch, with smart handling from the rest of the on-air crew, and with insightful comments from Woods. But it might not have been great, and this is mostly just notable for NBC trying to offer Woods an on-air role, even though that came to nothing in the end.