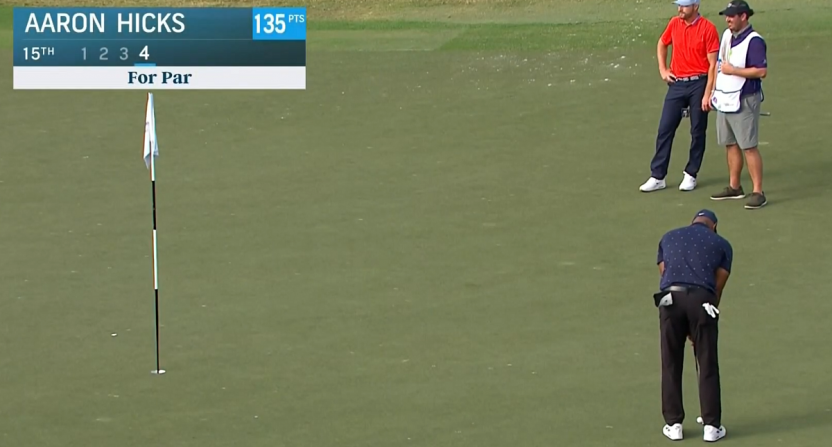 It was up against an NFL conference title game, sure, but that’s still an incredible opportunity for the women’s game to be featured, especially with the men’s tournament ending in the later window. It’s rare that women’s golf has the stage to itself within the sport, and you couldn’t ask for a more appealing setup.

Except for this: the Tournament of Champions, a 25-player field featuring only women who won events last season on the LPGA Tour, is a pro-am. And while men’s events like the annual Pebble Beach Pro-Am are cutting out the amateurs and celebrity golfers that populate it each year, the LPGA event did not.

That meant in addition to the 25 LPGA champs, there was a field of 52 celebs. 50 were men. That meant during a prime window for women’s golf coverage, two hours on NBC, viewers were treated to nearly as many shots from men who aren’t professionals as they were some of the best women’s players in the world.

Here’s the breakdown from one viewer, who deserves all the credit in the world for this slog catalogue:

The remaining % of air time left over was filler, celebrity interviews, celebrity bios and accomplishments, & just general BS that adds nothing to the broadcast.
No one wants to watch Aaron Hicks miss a bogey putt & then cut to an important putt half way to the hole, Frustrating

That’s absolutely brutal, and aside from friends and relatives of former tennis pro Mardy Fish, no one seemed to enjoy it:

First, a compliment—at least we get to see every shot by Kang & Korda^2. As they’re the final group, that’s basically a minimum requirement though. Not much credit granted. Of course, we have to sit through a MASSIVE commercial load to do so.

Instead, insultingly, it’s a steady stream of “celebrities”, mixed in with Mike Flaskey. The telecast is so far below the minimum standard of any week-to-week PGA event on NBC. These are precious network appearances for the LPGA, but this broadcast product is totally unbecoming.

Mike Flaskey, by the way: CEO of tournament sponsor Diamond Resorts. At least he had a good time!

Couldn’t ask for a better Sunday #DiamondLPGA partner than my good friend @coleswindell! We had a blast out there and even hit some birdies along the way. #BOOM #StayVacationed pic.twitter.com/8n6TkVN8JM

@BigRandyNLU I don’t normally watch women’s golf, or most men’s golf w/out Cat tbh. I was actually intrigued by this finish. I’ve watched for 30 minutes and this broadcast has been satirically bad. I’m offended for you. Light the pod up for me??

I swear it was good viewing until it got on NBC. Missed opportunity in the opening. pic.twitter.com/Z7SOMS4fov

And our 3 young marketable American @LPGA golfers who are battling for the title are walking down 18…….. now let’s here from mediocre at best former tennis pro Mardy Fish about his net 65. Good work NBC.

@BigRandyNLU I don’t normally watch women’s golf, or most men’s golf w/out Cat tbh. I was actually intrigued by this finish. I’ve watched for 30 minutes and this broadcast has been satirically bad. I’m offended for you. Light the pod up for me??

There’s plenty more out there, too. This probably sums it up best:

To put a fine point on this @lpga coverage from @NBCSports and @GolfChannel—not only is this coverage transparently, laughably substandard to any normal PGA event, but the LPGA *pays* NBC for the trouble. I wonder if it comes with a satisfaction guarantee?cc: @mollysolomon_gc

Again, this was despite the event itself featuring three hugely talented, hugely popular young American women playing in the final group. Of course, about that: there were plenty of stretches during the final round (again, of a real tournament) where they were forced to wait on the group ahead of them. That group: Josh Scobee, Aaron Hicks, and Mardy Fish.

As Will Knights of The Fried Egg pointed out (with an illustrative screenshot), the final group waited nearly fifteen minutes to tee off on the thirteenth hole. Think about that! These are actual pros competing, and they’re standing around while male athletes from other sports hack it around.

A similar scene happened on the 18th hole, which also featured a DJ blaring music for some reason:

@NoLayingUp the scene on the 18th at Diamond Resorts is absurd. What is happening? Leaders waiting to tee off while “celebrities” grind over 4 footers and Michael Jackson blares through the speakers. Awful

Again, that’s a tournament issue, not an NBC issue, but when NBC is eagerly showing the male ams, what does that say? It really was a shame, because the golf itself was awesome. Nelly Korda shot a final round 64, best in the group, but came up two shots shy of catching her sister Jessica and Danielle Kang who finished tied. On the first playoff hole, Jessica Korda did this:

What a way to WIN. ? @Thejessicakorda claims her sixth LPGA title at the 2021 #DiamondLPGA. ? pic.twitter.com/4dGhjBF97h

That’s a hell of a finish.

It would have been nice if viewers hadn’t had to work so hard to get to it. Remember this if the ratings come out low, because it’s not an indictment on the product of women’s golf, or how marketable their stars are. It’s instead a justified indictment of the presentation; this was essentially treated as a men’s celebrity golf tournament for a huge portion of the broadcast, and that should be unacceptable.