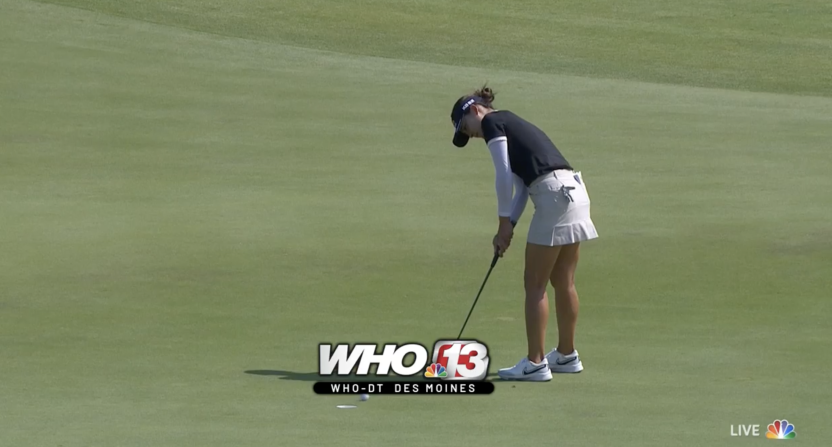 NBC owns the broadcasting rights to a lot of golf, but they sure don’t seem to like giving viewers a chance to enjoy it.

A week after the debacle that was NBC Sports’ coverage of the 2022 U.S. Open, which included an overabundance of commercials, many of which led to viewers missing shots, their coverage of the 2022 Women’s PGA Championship’s final hole left many viewers scratching their heads thanks to a missed putt during commercials and a winning putt obscured by local affiliate logos.

It was a wild finish for the Women’s PGA Championship as Lexi Thompson, who led the tournament by two strokes after Sunday’s first nine, bogeyed two of her final three holes, clearing the way for In Gee Chun to complete a comeback and claim a one-shot victory. However, some viewers didn’t get a chance to see Thompson’s last-ditch attempt to salvage things with a birdie on the 18th as their local affiliate went to a commercial instead.

Really @nbc cut to a commercial right as Lexi Thompson was going to put?? WTH?

Unbelievable NBC goes to commercial break on the 18th hole of the women’s open with the leaders putting. So stupid

After Thompson’s putt, Chun secured victory with a clutch five-foot putt on the 18th green, though for many viewers, the ball was obscured by their local NBC affiliate’s logo appearing at the most inopportune time.

⁦@WFLA⁩ ⁦@WFLAGayleG⁩ great logo placement for the final putt of a women’s major championship. Too bad we couldn’t see the putt drop. pic.twitter.com/p41b4FbN1g

In Columbus, oh the nbc logo covered the bottom of the screen including the hole as she hit the final putt

It appears that the confusion stems from the tournament running beyond NBC’s appointed end time and cutting into the USA Track & Field Outdoor Championships, leaving local affiliates with some decisions to make about whether or not they could let coverage bleed through or ensure that they got their expected commercial time.

It should be noted that not every affiliate went to a commercial or flashed their logo during the tournament-winning putt. But perhaps this is an opportunity for those in the markets that did to keep a mental note. The next time you’re watching an important event on that NBC affiliate and it’s gone over the allotted time, be prepared to consider a second viewing option as needed.