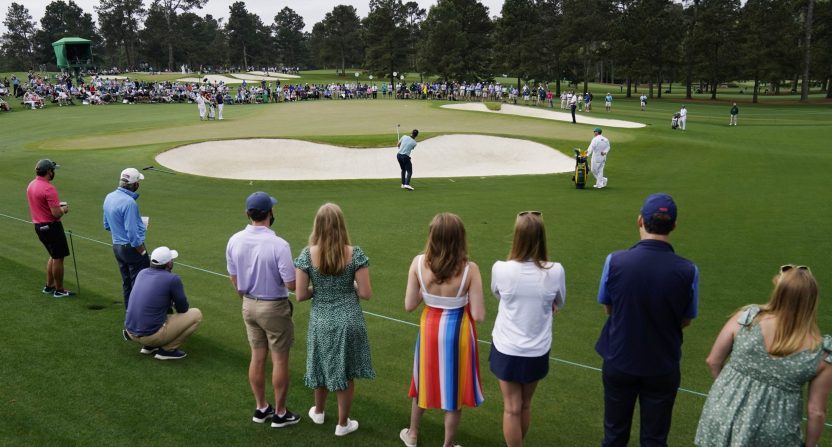 The Masters might be going off as planned so far on the course, albeit with fewer patrons, but the pandemic is certainly still a thing.

It’s not exactly a big topic of conversation on the broadcast, or indeed even the top narrative for sporting events anymore, but in case anyone needed a reminder, news broke last night that a few media members at Augusta National tested positive for COVID-19. Others who had been in contact are now quarantining due to contact tracing protocols.

According to Christine Brennan at USA Today, one of the journalists had been at Augusta since last week, having arrived to cover the Augusta National Women’s Amateur tournament.

An accredited member of the media at the Masters tested positive for COVID-19 Thursday morning after spending six days at Augusta National Golf Club covering the Women’s Amateur tournament and the Masters.

The journalist, who said they arrived at Augusta National April 2, is quarantining and will take another test Friday morning. The person spoke with USA TODAY Sports on the condition of anonymity due to the personal nature of the matter.

Two other accredited members of the media tested positive in Augusta National’s required testing program before they entered the golf club for this week’s tournament, according to several people with knowledge of the situation.

One of those journalists was staying at a house in the area with three other accredited members of the media who had tested negative. Because of contact tracing, all four journalists are now quarantining.

One reporter currently quarantining is The Athletic’s Brendan Quinn, who revealed that news last night:

So … this is a bummer. I’m among those who briefly came into (masked) contact w/ an individual who later tested positive for Covid. Due to contact tracing policies, I’m quarantining and no longer on-site covering the Masters@JoshTheAthletic is there in my spot. Give a follow! https://t.co/xgjuaiwzuW

Obviously the vaccine rollouts and various states and cities opening back up feels like an ending, we’re actually still very much in the middle of things still. Working in sports media requires travel and in-person interactions for those actually covering the events that are back. That’s certainly safer and more manageable now than it was until very recently, but it’s not without risk.

Hopefully everyone involved here makes a recovery and can travel home safely.