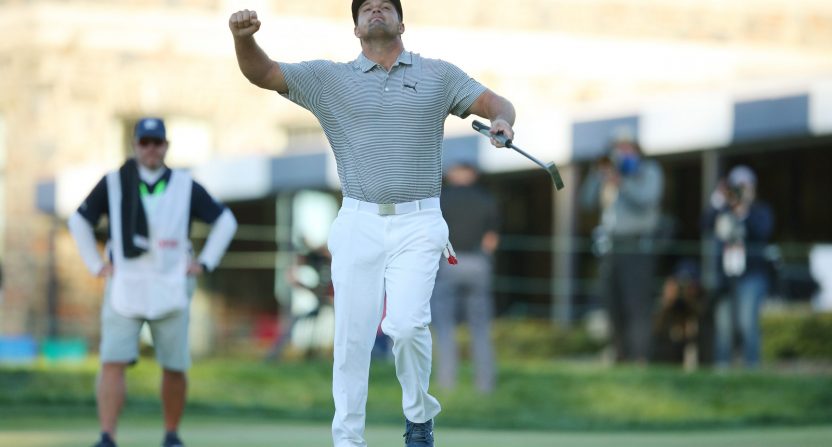 A few years ago, the PGA Tour moved heaven, earth, and the PGA Championship in order to ensure their highest profile events didn’t have to face NFL competition on Sundays.

That calendar overhaul meant the Tour’s FedEx Cup Playoffs could find room in August and be wrapped up before Labor Day. This weekend, we had a good example as to why they were so interested in that, to the point of seemingly strong-arming the PGA of America (which runs the PGA Championship) into the move. The U.S. Open, played in September for the first time in more than a century thanks to the pandemic, faced the kind of ratings competition it normally avoids by wrapping up on its traditional Fathers Day weekend.

It didn’t go well, either. Airing on NBC after the postponement forced Fox to essentially abandon their entire golf portfolio midstream due to football commitments, the final round delivered a record low in terms of rating and viewership in the overnight ratings, as noted by Sports Media Watch.

Sunday’s final round of the US Open averaged a 2.0 rating and 3.21 million viewers on NBC, easily the lowest rated and least-watched final round of the tournament on record (dates back to 1987). The previous lows were a comparably strong 3.0 and 4.63 million in 2014, NBC’s previous year carrying the event.

The tournament itself wasn’t exactly thrilling; 2020 has seen Bryson DeChambeau blow up in terms of content generation and belt-size, but watching him bomb-and-gouge his way to a six-shot victory over a leaderboard not filled with names recognizable to casual fans was always going to be tough for whichever network had the broadcast. But the U.S. Open occupies a fairly cushy spot in the sports calendar; Sunday afternoon and evening in late June is a very different story than NFL Sunday in the middle of an incredibly condensed sports calendar overall.

The NFL specifically is a real issue. As SMW pointed out, the U.S. Open did final round numbers that fell below the final two PGA Tour playoff events.

It wasn’t just the final round; third round numbers were poor as well, and Saturday saw competition with college football, among others. It’s dangerous to draw any sort of wide-ranging conclusions from sports ratings right now; we’ve never seen an environment like this, in terms of event density and frequency along with disrupted viewer habits. (It hasn’t stopped some people from trying in bad faith; the “ratings are down because of political activism” argument falls apart pretty easily once golf of all things sees record lows, though.)

If there’s one thing that can maybe be pointed to, though, it’s that the PGA Tour really may have made the right decision when they went all-in on their NFL-avoidance strategy. NBC and the USGA won’t have to deal with this going forward (well, hopefully they won’t have to), and next summer will see a West Coast U.S. Open at Torrey Pines that should offer a return to ratings form. There’s still one major to go this year, of course. The Masters in November is also finishing on an NFL Sunday, though thanks to coordination between Augusta National and CBS, it’s going to wrap up earlier in the afternoon against limited NFL competition.

That means this U.S. Open ended up serving as a look at what happens when a major championship goes up against the NFL. Considering how it went for golf, expect their governing bodies to do everything possible to make sure it’s a one-off occurrence.