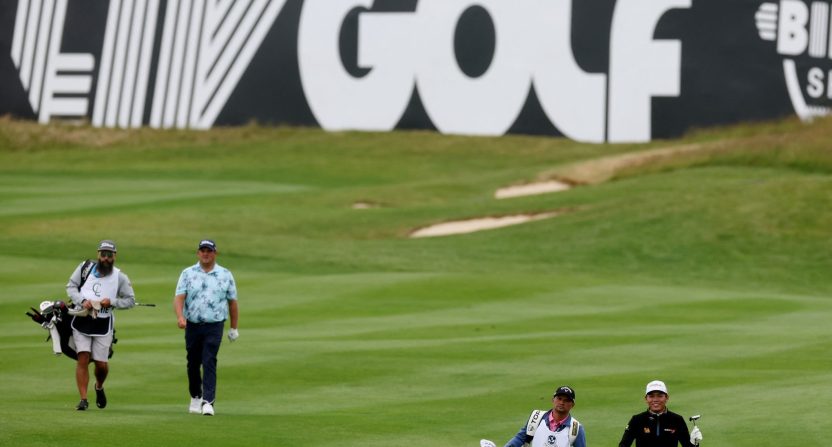 LIV Golf is having its next tournament at Bedminster, a golf course owned by former U.S. President Donald Trump. From the beginning of LIV Golf, many have raised the point that the country of Saudi Arabia, whose Public Investment Fund is funding the tour, is using LIV Golf as a means of sportswashing to hide their various atrocities.

The National Press Club is the latest to express their opposition to LIV Golf, citing the assassination of journalist Jamal Khashoggi. A statement from National Press Club President Jen Judson and Press Club Journalism Institute President Gil Klein opposed LIV Golf, criticized the former president for collaborating with Saudi Arabia, and calls for the public to essentially boycott LIV Golf.

Extremely strong statement from the National Press Club on the LIV golf event. "We call on all Americans to see this unsavory attempt to minimize the grisly bone-saw attack on Washington Post opinion writer Jamal Khashoggi for what it is…" pic.twitter.com/k7VKrUWA6k

“We are revolted by the way the Saudi-funded LIV enterprise has followed the fist bump in the desert by shoving themselves onto golf courses and television screens. We call on all Americans to see this unsavory attempt to minimize the grisly bone-saw attack on Washington Post opinion writer Jamal Khashoggi for what it is – an attempt to sweep under the rug a brutal state-sponsored murder. We call on people of conscience to reject this tournament. Do not attend. Do not watch it on television. Let it fail.

“That the tournament is being held at a course owned by former President Trump is, if possible, even more revolting. It reminds us that the former President bragged of distracting Congress from the murder, delaying the release of the final U.S. government report that concluded MBS, the Crown Prince of Saudi Arabia (and recipient of the fist-bump from President Biden) was most likely involved in planning and approving Jamal’s murder. And the tournament on the Trump course reminds us how Saudi Arabia finds ways to personally enrich Trump and his family – including $2 billion to his son in law.

“We note that at one of LIV’s first news conferences their officials shouted down a question from an AP reporter and escorted him from the room saying that he was being rude. That is how the LIV episode started. They silenced the press. Again.

“Finally, we note that LIV is currently seeking representation by a public relations firm to make the slaughter of a journalist more acceptable to the American public through golf. We call on public relations firms, many of whom employ former journalists, to reject this blood money. We understand that clients need representation, but it seems reasonable to draw the line at clients that use a bone saw on a journalist. We hope the prospective PR firm thinks very carefully before agreeing to work for LIV. Their association with LIV will define who they are and damage their carefully developed reputation. This will not be good for their other clients or their business. We suggest they stay on the fairway.”

“MBS” refers to Mohammed bin Salman, who is not only the Crown Prince of Saudi Arabia but the chairman of the Public Investment Fund. 9/11 Survivors, their families, as well as families of the fallen, have criticized LIV golfers and Trump for aligning with the Saudis for a tournament that is taking place 50 miles away from the World Trade Center.

Whether it’s because people feel that LIV Golf is being funded by “blood money” or that they think the PGA is the superior tour, not too many people are watching LIV Golf as it’s streaming only in the United States. The media has kept LIV Golf in the news more than anyone, but the vast majority of the stories written and questions toward LIV golfers and officials are about their Saudi ties and not about the actual play. So while LIV Golf is getting media attention, it’s not the sportswashing kind organizers hoped.