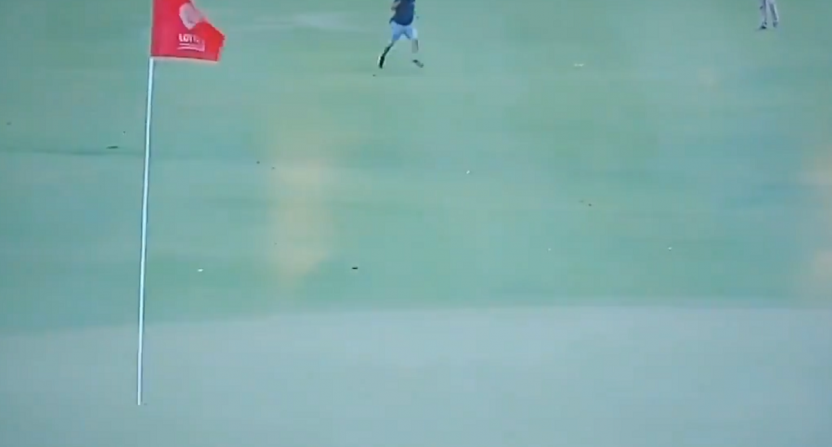 You’re reading this post on a site called Awful Announcing. What a lot of people don’t realize, though, is that the site doesn’t exist solely to be negative.

For some of you that’s obvious; we cover the world of sports media and sports business, along with newsworthy or entertaining moments from broadcasts. There’s a wide swath of the population that doesn’t know that, though; almost every time we tweet out a fun moment from a broadcast we get mentions saying “This isn’t awful! This is good announcing!”

All of that is to say that we really do try to give credit to those doing good or even great work producing sports on television or online. (Or on the radio, or reporting in newspapers or online, etc. You know what I mean.)

As the championship wasn’t exactly in doubt for most of the final round, it was easier to notice things on the periphery. That included the pace of play; Ko and playing partner/rising star of the sport Nelly Korda were in the final group, and despite not having anyone pushing them from behind they still set an aspirational pace for their last eighteen holes.

That’s a departure from the norm for modern professional golf, regardless of gender, which is what made it so impressive.

It’s inspiring for golf viewers who tire of watching minutes of nothing while players go through unnecessarily elaborate preshot routines, but it does lead to a few issues for networks airing the sport. In this case, Nelly Korda’s pace of play put a lot of pressure on this Golf Channel cameraman, who had to sprint to set up for Korda’s shot late in the last round.

Shoutout to this Golf Channel cameraman who absolutely BOOKED IT after Lydia Ko's shot to get to Nelly Korda in time for her shot. pic.twitter.com/vvhUeVrtth

The wide view here is so, so perfectly absurd; the camera operator sprinting across the fairway in the background is something straight out of a lighter Wes Anderson film.

The LPGA event finished on time, which is more than can be said for most men’s events this year. That’s been a real issue for rightsholders, as Geoff Shackelford summarized in a piece about the price of slow play on the PGA Tour:

Since the Florida swing when the Tour has played twosomes on weekends (unless forced by weather to go out in three), their network partners at NBC and CBS have routinely missed their scheduled sign-off on time. This means the rules staff projects a pace hoping to have the round finish just before the network sign-off time. Yet fields are still missing the time par.

Besides being tedious to watch, the extra 45-60 minutes costs “partners” money. And every sport is trying to prevent bloat in fear of the coveted demo going back to their Playstations (if they ever left them to watch golf).

Pace of play in pro golf has been an issue for years, and it’s only getting worse. There are already rules on the books that would push players to the right side of the ledger, and it’s time to start enforcing them. But kudos to this camera operator. That kind of hustle should be rewarded. Hell of a running form, too, especially while carrying a shoulder camera.