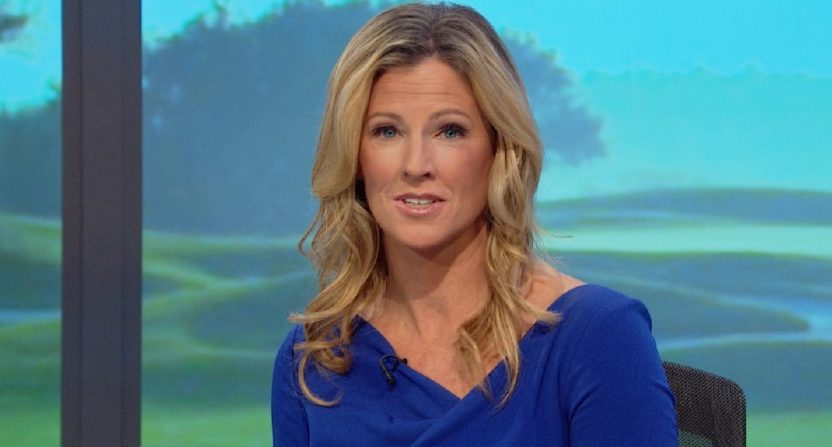 Kelly Tilghman was, among many other career highlights, the first woman to serve as a play-by-play commentator for PGA Tour coverage. That’s a big deal in any sport, of course, but perhaps even bigger in golf, given the game’s patriarchal history.

On Wednesday, Tilghman and Golf Channel announced that this week’s Arnold Palmer Invitational would be Tilghman’s last with the network.

After 22 years, Kelly Tilghman is signing off from Golf Central this Sunday. She has been a trailblazer for female broadcasters and we thank her for her immeasurable contributions. Please enjoy her “A very fond farewell” column. https://t.co/Kd988ZA5lk pic.twitter.com/oxtGVNRCCh

As that release notes, Tilghman was at Golf Channel since 1996, which is nearly the beginning for the network that first hit the air in 1995.

Tilghman’s farewell letter is worth reading, as you might expect, especially if you like Arnold Palmer stories:

But most of all, thank you for Golf Channel.

It was here that I learned how special golf really is.

At its inception, few believed a 24/7 cable network built around a sport where you can hear birds chirping could survive.

Enter Arnold Palmer. I’ll never forget that day in the early years when he paid our tiny newsroom a surprise visit. It was an honor to be in his presence. One could only imagine how I felt when he put his hand on my shoulder and whispered, “I hope you believe in this place as much as I do.”

It was my privilege to work for you. It was my honor to be a voice in your living room, to be able to track Tiger and Annika’s history with you. What a thrill it was to share conversations with icons like Palmer, Jack Nicklaus and Nancy Lopez with you. It was also my good fortune to usher in the game’s next fearless generation of talent, yes, with you.

I want to personally thank you for your loyalty and relentless passion for this game and this channel.

Thank you, Golf Channel, for an incredible run.

Tilghman’s voice will be missed. Golf Channel does have female hosts, but none with Tilghman’s profile. Hopefully, they continue to elevate the talented women they do have on staff. This weekend could be a nice farewell, too; the Arnold Palmer Invitational at Bay Hill was always one of Mr. Palmer’s favorite weeks of the year, at his course.

It’s a fitting place for Tilghman to leave the network that both she and Arnie helped build.