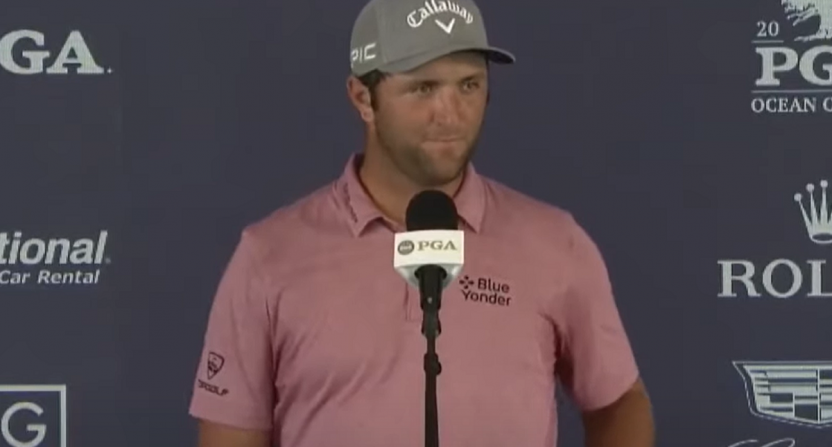 Having been in the media center at a major championship, it’s apparent that many players would rather be anywhere else.

They don’t usually just come right out and say it, though. That’s what made Jon Rahm’s “outburst” (in quotes as he wasn’t shouting or anything) on Saturday evening so surprising; Rahm actually just came out and said that he didn’t want to be there. And then, after he answered a question for a Spanish-language outlet, he left.

Rahm had played poorly by his standards, and finished with consecutive bogeys to turn an under-par round into an even-par round, and leaving him at +3 and ten shots back of third-round leader and eventual winner Phil Mickelson. That effectively ended Rahm’s chances to win, which led to this.

The transcript is funny to look at, considering how short it is relative to the usual pages of lengthy quotes on offer from players. The relevant moment:

“I don’t know and I don’t care, to be honest. I hit the ball tee to green as well as I could have for the most part and barely made any putts. And yeah, I’m not really happy, and to be honest, being in 40th place and finishing bogey-bogey like that, I really don’t want to be here right now.”

That’s in itself maybe not that notable, and probably not worth a post here on its own. But how Rahm returned today after a 68 (en route to a T8 finish) was worth noting for his apology. Not just that he apologized, of course; as the moderator pointed out, he certainly didn’t need to. (And had I been in the room, I wouldn’t have cared at all about his Saturday decision. If anything it would have livened things up a bit.)

But it was less the apology overall and more how Rahm apologized, as he hit rare notes for an athlete in terms of emotional understanding.

Yeah, I mean, with that I could probably take a second to apologize everybody here because my attitude yesterday after the round maybe wasn’t the best, and today shows what a positive attitude throughout the round can make. It’s not anybody’s fault here or at home, so I’m sorry for that.

It’s okay to be upset, and I’m never going to judge myself for being upset, but I will judge myself if I don’t conduct myself properly, and I definitely didn’t yesterday.

That sort of understanding that it wasn’t the emotions themselves that were the problem, but instead how he processed and handled them, is really a refreshing outlook for an athlete at the top of their sport. Rahm certainly qualifies as that. But if there’s one thing athletes can model, this sort of mental and emotional health awareness could be really helpful.

When Rahm and his wife had their first child in April ahead of the Masters, the floodgates opened for one of golf’s dumber narratives: how becoming a parent lead to greater perspective that helped on the course. Considering Rahm’s on-course temperature is still running plenty hot, I think we can safely assume today has nothing to do with that.

Rather, it’s just a great example of someone realizing that in a heated environment, sometimes negative emotions occur, which is totally understandable. Kudos to Rahm for being willing to voice that to the media, and for doing so in an articulate fashion.