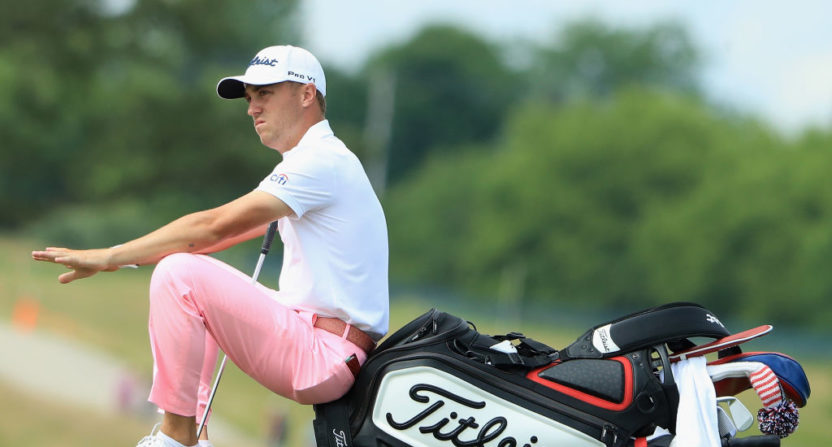 Fox is in its third year broadcasting the U.S. Open, having taken over from NBC’s long-running coverage in 2015. That means the longstanding tradition of Johnny Miller calling the event ended as well, which was especially noticeable yesterday.

That’s because Justin Thomas shot a 63, tying the all-time U.S. Open record; one of the men who did that was Johnny Miller, who famously shot a final-round 63 to win the 1973 edition at Oakmont.

Thomas’s 63 was in the third round, so by default it wasn’t to win, but it was lower relative to par; Erin Hills plays at a par-72. Still, without Miller on the broadcast, we were deprived of his opinions on Thomas’s achievement, and forced to wonder just what line of reasoning he might take in an effort to maintain his personal fiefdom, as Miller was famous for dropping in his accomplishment at any possible moment.

We were deprived, that is, until the Golf Channel’s Ryan Lavner reached Miller for comment (which is an unnecessary qualifier, as it’s difficult to imagine a scenario on which Johnny Miller has no comment). The results were no less hilarious for their predictability:

Talked to Johnny. "9 under is incredible with #USOpen pressure, but it isn't a US Open course that I'm familiar with the way it was set up."

“Taking nothing away from 9 under par – 9 under is incredible with U.S. Open pressure,” Miller told GolfChannel.com by phone. “But it isn’t a U.S. Open course that I’m familiar with the way it was set up.”

“It looks like a PGA Tour event course setup,” he said. “I’m not sure where the days of the 24- to 29-yard-wide fairways that we played every time went. It’s interesting to see where the USGA has gone with the U.S. Open, being a little more friendly than in years’ past.”

This belies a fundamental misunderstanding of what the USGA is doing at Erin Hills, where wide fairways are indeed a bit more forgiving than incredibly penal rough. But being in the wrong place on those fairways is in some ways just as unforgiving in terms of your chances at birdie. It’s better and fairer golf, while still remaining long and difficult.

What’s also fascinating about that, of course, is that to do this, Thomas had to eagle the 18th hole, a 670-yard par 5 the likes of which Miller never encountered. (Yes, equipment and balls are different now, but hitting a three wood off the fairway to a precise spot isn’t exactly a different sport.)

Imagine watching JT hit a 3 wood from 300 yards to 5 feet and actually thinking "man, this is too easy"

Players are better now than they ever have been before, and that goes for all sports. It’s not difficult to see, nor difficult to imagine; it’s the nature of the world. Not difficult, that is, unless you’re an older ex-athlete who can’t appreciate the advancement.

Erin Hills played easier yesterday for a variety of reasons, but that doesn’t mean it played easily. Paul Casey went out in the last group and shot a 75. It was somewhat soft, the pin placements weren’t the toughest of the week, and Thomas played some smartly aggressive golf in less-than-windy conditions.

Today, the pins are a bit tougher, and the wind has picked up mightily; that’s going to mean plenty of higher scores, along with a lengthy broadcast filled with players backing off their shots. It’s more in line with what Johnny Miller thinks of the U.S Open, but the important thing to remember is that Johnny Miller is wrong. The tournament is the tournament, and Thomas’s accomplishment deserves all the accolades.

At the very least, we know that somewhere, Johnny is watching the tournament today and treating his living room to the same analysis he’d be giving to the country if NBC still had the rights. (His plants are going to hear a lot about nerves.)

Even more comforting is this video of Jack Nicklaus responding to Miller criticizing one of his greens.