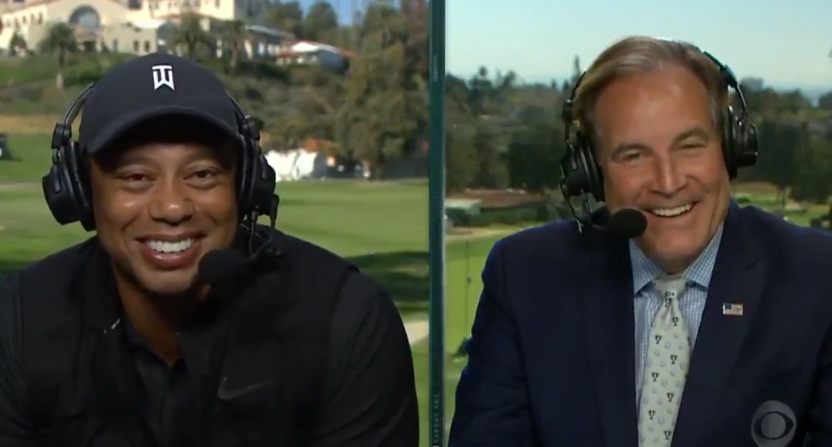 Tiger Woods employed a classic news dump a month ago to announce his latest back surgery.

Released at 4:31 PM Eastern the evening before Inauguration Day, the reveal that Woods had undergone another microdiscectomy flew a bit under the radar outside of golf circles.

Today, with the PGA Tour making its annual stop at Riviera for the Tiger-hosted Genesis Invitational (benefitting Tiger’s foundation), Woods appeared on the broadcast for a brief interview with Jim Nantz. Woods remains the biggest name in golf, and he probably always will be. As long as he can theoretically play, everyone’s going to want to know if he’s playing. That’s especially true a few months out from the Masters.

Looking forward to being in the booth today with Jim Nantz and watch a champion be crowned @thegenesisinv. Tune in to CBS at 2pm PST.

Nantz isn’t exactly known for his persistent questioning, but considering all anyone watching today wants to know about Tiger is “How is the back?”, “When will you be playing again?”, and “Will it be in time for the Masters?” Nantz didn’t let viewers down, hitting Tiger for information and updates on all fronts, and even offering some pushback to Tiger’s trademark deflections. Now, Nantz wasn’t gunning for a Pulitzer here. This was only forceful by golf broadcast standards, especially with Woods, who has so much sway in the game that interviewers typically don’t do much beyond courtesy chuckles.

Judged by that standard, though, Nantz really did admirably try to get Tiger to commit to something, one way or the other.

CBS posted an illustrative segment of the interview:

Tiger Woods joined Jim Nantz in the booth and spoke about his recovery from back surgery. pic.twitter.com/3TyTHgRFPA

Transcription of that segment and others via the invaluable Eamon Lynch at Golfweek (see how often you catch Tiger saying he’s not going to be back soon without actually saying that):

“I’m still in the gym doing the mundane things you have to do for rehab before I can start gravitating toward something a little more,” Woods said.

Those three special words—“a little more”—almost made Nantz visibly drool. So, he purred, what have you managed to do in terms of golf?

Jim wanted more. “The Masters. … You gonna be there?”

“God I hope so. I gotta get there first,” Woods said, displaying his enviable gift for making the obvious sound ominous. “This is the only back I’ve got. I don’t have much wiggle room left here.”

By now, Nantz was sounding like a Tinder prospector growing impatient with flirting. He asked if Woods planned to play a PGA Tour event before the Masters.

“I don’t know what the plan is,” came the less-than-illuminating response.

The chummy sign-off and general attitude were pleasant throughout, of course. This wasn’t a confrontation or a deep dive; it was an interview highlighting Tiger’s charitable foundation during an exciting back nine finish at an amazing golf course.

That’s just not typically the place for any kind of breaking news, but getting Tiger on the record led to plenty of outlets jumping on that news. (Golfweek, ESPN, and plenty more. Even this very post, technically!) That’s a solid return for a few minutes with Tiger during what’s usually a puff segment, and even though Tiger didn’t want to offer much, Nantz did more than he had to. It was a much better use of that real estate than golf viewers have come to expect.