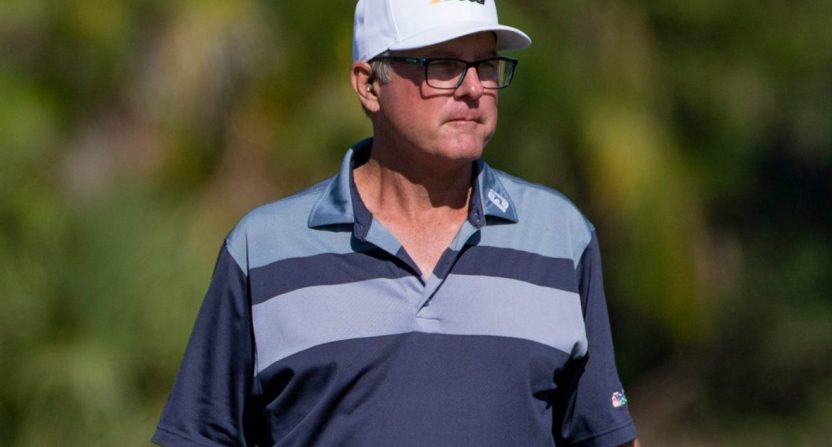 The Saudi-government backed sportswashing venture has until recent days been very light on details, finally releasing a field list that was underwhelming aside from a few surprises. (Though, really, Dustin Johnson taking a boatload of cash without caring who it’s coming from isn’t exactly a surprise.)

LIV is also light on plans for media distribution. Currently the vague goal is something like “broadcast it on YouTube”, but so far we don’t know much about how they’d even produce a broadcast product.

One piece became somewhat clearer today, as Kent Paisley reported at Golf Digest that longtime Golf Channel analyst Jerry Foltz has left the network for an agreement with LIV. The timing is interesting, as Foltz had been gearing up for Golf Channel’s coverage of the U.S. Women’s Open this week, to the point he’d been on the media preview conference call just days ago.

“Jerry is no longer under contract with us,” a Golf Channel spokesman told Golf Digest.

Multiple sources say that Foltz, 59, left Golf Channel to work for LIV Golf in what is believed to be an announcing role for the nascent golf league. One source said Foltz asked out of his Golf Channel contract.
When contacted about leaving Golf Channel for LIV Golf, Foltz remained an ardent supporter of the women’s game, stating in a text message: “No comment. This week is about the biggest event in women’s history, not a commentator.”

On May 26, a week before the opening round of the Women’s Open, Foltz was part of an NBC Sports media conference call previewing the championship along with fellow announcers Tom Abbott, Kay Cockerill, Morgan Pressel and Karen Stupples.

It’s an interesting move for Foltz, who was presumably paid well to make this jump at this time. The thing about LIV Golf, though, is that even if you’re someone who is okay with the whole “sports being used to normalize oppressive regime” angle (and you shouldn’t be), the actual product, as currently described, kind of sucks.

The whole thing just feels off, too, like they have more money than they could possibly spend and want to use it to launch a global golf league, yet have zero idea what’s required in between those two steps of the plan. Here’s this commercial, for example, which aired on Sky Sports:

This is the LIV Golf advert just aired on Sky. “Shot just got real”. pic.twitter.com/ifpHbPsNbG

“Are those the most dialated pupils you guys have?”

Despite all the money being thrown at this, it still just feels cheap, in every sense of the word.