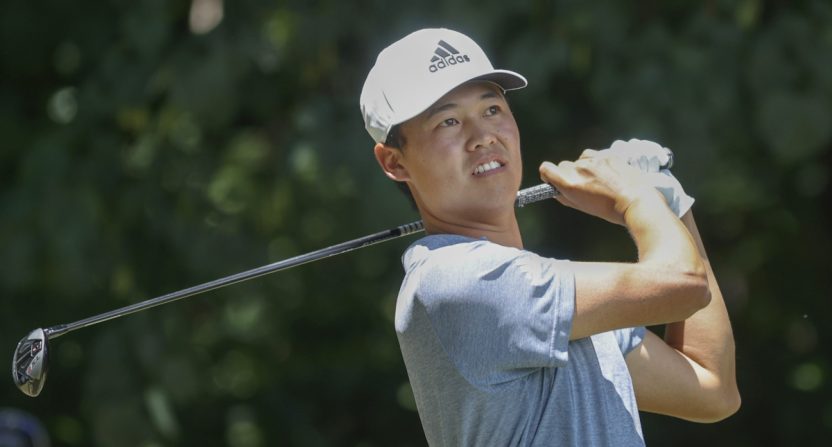 It was a surprising moment, occurring as the broadcast came back from a playing-through side-by-side shot during a commercial break. Seeing a shot like that live, from one of the tournament leaders no less, is always a fun moment for coverage, and the percentage odds of that kind of thing happening are such that broadcasters can’t possibly prepare for it. (Unlike, say, a shot that the broadcast already knows is going in; this wasn’t a “Just a moment ago…” situation.)

Baker-Finch called Wu’s eagle in one of the most awkward ways possible: by working in a coded conservative catchphrase. (Here’s a link to the clip, in case the tweet below gets taken down by CBS or the PGA Tour.)

If you’re somehow unaware, “Let’s Go Brandon” became a flash phrase last year, standing in for, essentially, “F*ck Joe Biden,” in the wake of a moment captured during a NASCAR broadcast, of all things. Here’s more on that from an Oct. 30, 2021 piece on the growth of the phrase from Colleen Long of The Associated Press, titled “How ‘Let’s Go Brandon’ became code for insulting Joe Biden”:

It started at an Oct. 2 NASCAR race at the Talladega Superspeedway in Alabama. Brandon Brown, a 28-year-old driver, had won his first Xfinity Series and was being interviewed by an NBC Sports reporter. The crowd behind him was chanting something at first difficult to make out. The reporter suggested they were chanting “Let’s go, Brandon” to cheer the driver. But it became increasingly clear they were saying: “F—- Joe Biden.”

NASCAR and NBC have since taken steps to limit “ambient crowd noise” during interviews, but it was too late — the phrase already had taken off.

It’s ironic that things are now coming full circle here, with a sports broadcaster on another network clearly going out of his way to use that phrase. For an example of just how prevalent it’s become, let’s look no further than LIV Golf’s event at Trump Bedminster, which saw the crowd chanting it with the former president on the tee.

“Let’s go Brandon” chant breaks out at #LIVGolf as President Trump, @DonaldJTrumpJr, @TuckerCarlson, @kimguilfoyle, @RepMTG, and @EricTrump stepped outside together.

Having said all of that: the fact that Baker-Finch chose that line does not necessarily mean he’s endorsing the meaning. It doesn’t really matter if he did or didn’t, though. But let’s say for argument’s sake he didn’t realize what he was saying, and that he simply heard the phrase before (trending on Twitter or in a headline or somewhere else) and did absolutely zero research into what it actually meant before uncorking it when a golfer named Brandon did something noteworthy.

Even with that as the working context: it doesn’t really matter. We’ve covered a lot of moments here before that illustrate how intent isn’t correlated to impact when it comes to word choice. Professional broadcasters get paid to speak words into a microphone on live television. We don’t need to handle them as if they’re high school kids working the school newscast. Ian Baker-Finch might regret the word choice once he bothers to learn what it means (presumably someone told him pretty quickly after the fact) but we can point out when someone fucks up.

This isn’t a call for him to be fired or even punished in any way. (If you’ve read this far hoping for a chance to call me out for trying to #cancel him, I’m sorry to disappoint, and also please find something more productive to do with your time. And also, cancel culture isn’t real.) It’s just noting that when you’re on the air, especially in a position like calling hundreds of hours of network sports every year, you can’t just wing it. Choosing a charged phrase like that one puts Baker-Finch in some troubling company, and it also distracts from the event itself.

But, hey, use a few more phrases like that and maybe Baker-Finch will be in line for a big money offer from LIV. He wouldn’t be the first longtime CBS analyst to make that jump.