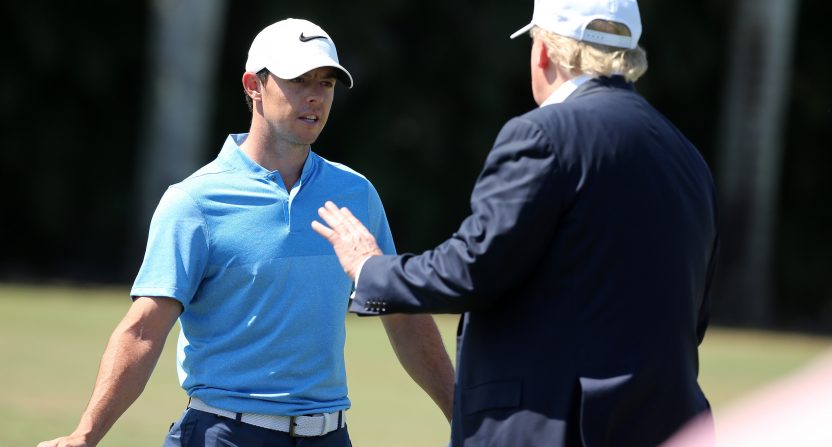 If there’s one sport that is going to intersect with politics often throughout the length of the Trump presidency, it’s golf.

Donald Trump is involved with 17 golf courses around the world, including some big-time properties. His Trump Doral course hosted a World Golf Championship event through last year, though that tournament has now moved to Mexico, which the PGA Tour insists had nothing to do with politics.

Aside from that, Trump loves to play golf, and he hasn’t let his day job slow him down. This past Sunday, he teed it up with Rory McIlroy at Trump International in West Palm Beach, Florida:

The White House had initially refused to comment on Trump’s playing partners, and said the President hadn’t spent that much time golfing, only that he “played a couple of holes.” That’s likely because the White House is sensitive to the perception that the President is vacationing on weekends and golfing at his own properties. (President Trump routinely criticized President Obama for golfing too often.)

A total non-story, then.

Enter No Laying Up, which has a bit of history when it comes to breaking news of Trump golfing with famous players. Back in December, we wrote about Golf Digest taking credit for the No Laying Up scoop that Trump would be teeing it up with Tiger Woods.

Sunday evening, the above tweet emerged, and then Monday, No Laying Up reported that beyond just taking the picture, Rory McIlroy had played with the President.

Rory McIlroy teed it up with the president of the United States, Donald Trump on Sunday morning at Trump International. McIlroy rode in the cart for all 18 holes with the president, and told No Laying Up the following:

McIlroy is recovering from a stress fracture, and hasn’t played competitively in a few weeks, but felt as if he couldn’t turn down an invitation from President of the United States:

Rory said that he did not get the call to play until Saturday night asking if he would play Sunday morning. McIlroy is nursing a stress fracture in his rib, and was not planning to play golf until the following weekend, but said he had to make an exception for the president.

If you didn’t catch the fun part, it’s that Rory said the President played a full round of golf, not “a few holes.”

This became a very big deal, as it tends to be when the White House isn’t straight with the facts. Of course, normally, the Trump White House tends to simply blame the media.

Do it POTUS. Call us fake news. Do it! https://t.co/YXFwuPPAKY

But in this case, the White House actually admitted they hadn’t been correct, and that the President had indeed played a full round of golf on Sunday:

In a statement Monday, Sanders responded to the discrepancy by saying Mr. Trump had “intended” to play just a few holes but ultimately stayed longer.

“As stated yesterday the President played golf. He intended to play a few holes and decided to play longer,” she said. “He also had a full day of meetings, calls and interviews for the new [National Security Adviser], which he is continuing today before returning to Washington, D.C. Tonight.”

Had McIlroy not gone on the record with Chris Solomon of No Laying Up, this might have gone unnoticed, despite the huge media apparatus following Trump’s every move. Solomon lives abroad in Amsterdam, ran the post on Monday, still beat the White House press corps to the story, and actually forced a Trump spokesperson to clarify the truth.

That’s solid work, and also a bit amazing. How did the President of the United States play a round of golf with one of the most famous golfers in the world without anyone knowing until it went up on a golf blog the next day?

McIlroy has taken heat for accepting the invitation to play with Trump, which is both understandable given the situation and perhaps not entirely fair. First, that he accepted the invitation shouldn’t be viewed as a tacit endorsement of the President’s politics. That’s a dangerous precedent. Second, he’s from Northern Ireland! He’s not even a US citizen. He’s not responsible.

Should he have refused, as some have suggested?

Well, it’s complicated. Would it have been a powerful message to decline the invite? In theory, though how that story would have been released is difficult to figure. That the two played together could have gone unreported, after all.

So what’s the better option? An audience with the President, during which you have access and, in theory, an opportunity to ask a few pointed questions? Or refuse to associate at all? That’s something that many public figures, sports and otherwise, are going to have to figure out going forward.

Rory chose one way, and now faces a backlash. That’s how it goes.

Some of that backlash has come from those currently or formerly working in traditional media. How much of that is related to McIlroy going on the record with a site like No Laying Up? He’s appeared twice on the No Laying Up podcast in recent months, and it was on that podcast he mentioned he prefers to give his time to a newer crowd.

Here’s a pundit attacking him for the Trump round, see if you can spot the jealousy:

“I literally can’t believe that McIlroy has done this,” he continued.

“You must understand the symbolism. He is very much about growing the sport. He doesn’t talk to the old media, he doesn’t talk to guys like me anymore, he talks to the new media. Good on him, but to then go and do this is the very opposite to what his intentions are. It is literally unbelievable.”

McIlroy has been otherwise silent about the matter, aside from the initial No Laying Up story. It’s easy to see why, as he’s in a bit of a no-win situation. He’ll be asked about it when he returns to action, and will have a statement ready by then.

Meanwhile, what a coup for No Laying Up.

It was so good Golf Digest even gave them proper credit this time.