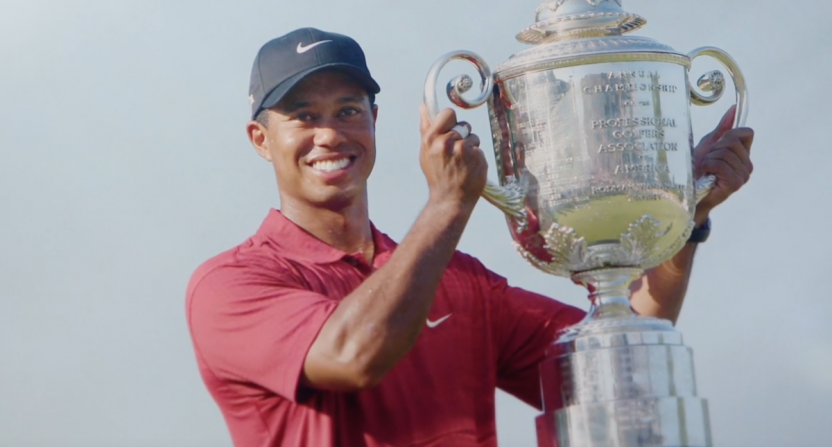 HBO Sports’ Tiger Woods documentary, Tiger, is split into two parts. But that’s not just because the film runs just over three hours in its entirety. Based on the 2018 biography by Armen Keteyian and Jeff Benedict (who are also executive producers here), the first and second parts of the documentary are really two different stories, even though they combine for the overall narrative of the golf superstar.

Part 1, which premieres Sunday night (Jan. 10) at 9 p.m. ET, chronicles Woods’ development as a golf prodigy, taking up the game under his father’s tutelage while he was still a toddler. The first 90 minutes follow his rise from amateur star to a professional who changed golf upon winning the 1997 Masters and became a cultural phenomenon.

Ultimately, this opening part of the documentary covers the relationship between Earl Woods and his son, how he practically engineered and conditioned Tiger into becoming a dominant golf machine. Yet being raised with the focus on becoming an all-time great in the sport — and perhaps a transcendent global figure — deprived him of formative experiences in childhood and adolescence.

Woods’s first girlfriend, Dina Parr, is interviewed extensively and arguably the most powerful moments in Part 1 come from home videos she took while they were together, showing Tiger genuinely smiling and having fun with friends rather than pleased with his success on the golf course.

Part 2 veers into the far more salacious aspects of Woods’ story and what could be viewed as a downward spiral fueled by hedonism following his father’s death in 2006. Woods was a brand and corporate entity by then, with a very carefully crafted public image. That created a pressure which he often felt the need to escape.

Trips to Las Vegas with an entourage (including Michael Jordan and Charles Barkley) were a regular part of his routine. And as Woods became involved with several women, that drew the attention of tabloids looking for sleazy scoops. An interview with a former National Enquirer editor might compel you to put your hand over your face or at least squirm as you watch.

Those familiar with this part of the story know that Rachel Uchitel, Woods’s mistress, inevitably becomes part of the narrative. How she’s introduced in the documentary is very entertaining, showing that directors Matthew Heineman and Matthew Hamachek have a great sense of drama and how to effectively pace a story.

Uchitel is interviewed here, finally willing to share details of her affair, providing a personal insight that is sometimes lacking in the earlier chapters of the Tiger Woods tale. She conveys an impression of someone whose behavior indicates a deprived childhood, but who also needs attention unrelated to the athletic success that has defined his life.

However, Part 2 isn’t all about sleaze and gossip. There’s still a strong sports aspect to the second half of the documentary, highlighted by Woods winning the 2008 U.S. Open.

Perhaps seeking to understand his father, who served with the Army Special Forces, Woods trains with Navy Seals in grueling sessions that eventually take a physical toll on a body already worn down by golf. That led to a knee injury which made it extremely painful and difficult to play at a high level. Yet Woods refuses to cede to his body breaking down, leading to one of the standout moments of his career.

Fans who prefer to look back at Woods’s incredible career over the past 20-plus years will likely enjoy Part 1 more because it’s much more focused on golf. Those more intrigued by the downfall of a great athlete and public figure should find Part 2 more to their liking.

Yet watching one and not the other avoids the full story. His childhood, relationship with his father, training to achieve at the highest level, and struggles with fame are prevalent themes that inform the entire film. They — along with insights from family friends, rivals, and media — create a deeper portrayal of a fascinating figure in sports history and make Tiger worth watching.

Executive producers including filmmaker Alex Gibney, Stacey Offman, Sam Pollard, and Richard Perello have plenty of experience in creating a compelling documentary. Yet this isn’t a perfect film. Nor might it be the definitive version of the Tiger Woods story.

What feels notably missing is input from the many competitors and colleagues Woods has faced over the years. (Where’s Phil Mickelson, whom Tiger once viewed with disdain? What about rivals like David Duval, who aspired to catch Woods but ultimately fell short? Maybe Jack Nicklaus could talk about Woods’s pursuit of his 18 major victories.) And of course, we don’t hear from the man himself.

But for now, Tiger is likely the best we’ll get.