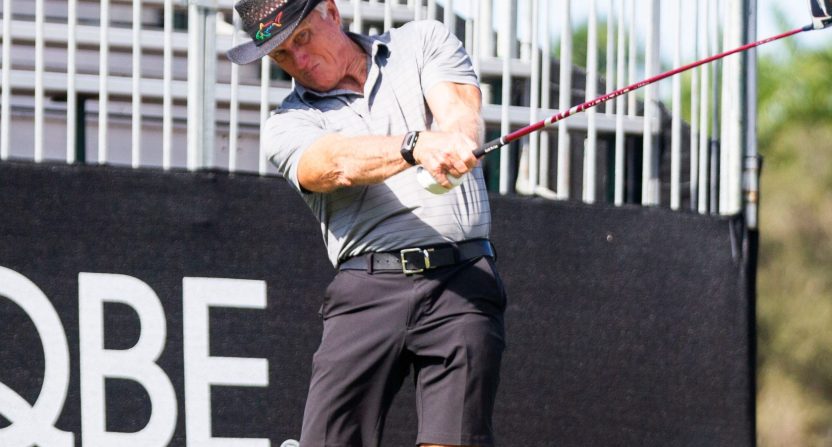 Greg Norman built an entire career out of failing to close out wins that seemed impossible to lose. Now he’s potentially once again coughing up a defeat from the jaws of victory, ironic given his nickname.

Last seen making headlines here thanks to ESPN’s 30 for 30 installment Shark, Norman is back in the wider sports crosshairs once again thanks to his ongoing attempts to launch an international golf tour funded and owned by the Saudi Arabian government through their People’s Investment Fund. (The same fund with which the Saudi government took controlling interest in current EPL club Newcastle United, among other ventures.)

This is the same rival golf tour that led to Phil Mickelson’s tarnished reputation after making statements admitting he knew it was wrong to work with the Saudi government but that it was worth it as a way to apply leverage to the PGA Tour. Mickelson hasn’t played since, and while he might make his return to defend his PGA Championship title next week at Southern Hills, he’s also one of the players who sought a PGA Tour release to play the first of the LIV Golf events outside London in June. The PGA Tour denied those releases en masse yesterday, setting up a potential legal showdown should players decide to take part in the big-money Saudi events anyway.

But this isn’t about Phil, although his next steps will be fascinating to watch. This is about Norman, the handpicked CEO in charge of the entire LIV Golf fiasco. Norman spoke today at a media event in London ahead of the June debut of the tour, and it went very, very poorly.

Via Rick Broadbent at The Times, here’s Norman on the murder of journalist Jamal Khashoggi, widely reported to have been sanctioned by Saudi crown prince Mohammed bin Salman.

Norman, the frontman for the series, said: “Everybody has owned up to it, right? It has been spoken about, from what I’ve read, going on what you guys reported. Take ownership, no matter what it is. Look, we’ve all made mistakes and you just want to learn from those mistakes and how you can correct them going forward.”

A UN special rapporteur and the CIA have claimed that Mohammed bin Salman, the Saudi crown prince and PIF chairman, sanctioned the killing. Bin Salman has denied the allegation but said that he took “full responsibility” as a leader of his country.

So, yes, on the good-faith level, that’s absurd and horrible. But the key thing here is that he’s failing even on the bad-faith level on which Norman is ostensibly paid handsomely to launch and operate a sportswashing effort to distract from the Saudi’s historical and ongoing abysmal record on human rights. Norman is finding ways to give the worst possible answers in big moments, ones that erode his own mission by tearing away some of the plausible deniability that could have let more of the world’s top players consider playing less for more money.

Let's all cut Greg some slack. Who would have foreseen having to answer the tough questions when accepting a job funded by the Saudi government?

That’s what cost Phil, in the end; it wasn’t that he was willing to take Saudi money or leverage them against the PGA Tour, it was that he openly revealed it, torpedoing his own platform and presumably angering everyone on all sides. Norman’s job, though, is to present a recognizable face and project platitudes about growing the game while turning a restrictive PGA Tour into the bad guys to rile up enough pros that the Saudi venture can get started and then go from there.

But he’s failing so, so badly, buckling under the slightest of pressures. (Which you have to sort of expect when you hire Greg Norman to do anything.) There was this interview from yesterday, where he talks himself into knots:

And then here he is again from today when pressed on Saudi Arabia’s recent execution spree:

The two-times Open champion, who said he had never met Bin Salman, was also asked how he felt when he heard about the execution of 81 men in Saudi Arabia on March 12. “I got a lot of messages but quite honestly I look forward,” he said. “I don’t look back. I don’t look into the politics of things. I’m not going to get into the quagmire of whatever else happens in someone else’s world. I heard about it and just kept moving on.”

That’s very much not how to answer that question, on any level. Again, this is obvious and transparent sportswashing, which is the worst thing happening with the story. But Norman is also providing a fantastic example of how even billions in government cash can’t always get something done if the wrong person is in charge. By seeming wholly unprepared for this inevitable questioning from the media, Norman is actively harming his own efforts, which is incredible. (And considering the ethical and moral issues at play here, absolutely hilarious.)

As you can see in the chart, over the past three months Greg Norman has taken a frighteningly rightward lurch towards the Useful Idiot Curve, the exact point at which his utility to the Saudi royals matches the severity of his missteps. Heaven help him if he drops below the line. pic.twitter.com/TB69BiPcKR

Without the threat of a major breakaway of top talent, the PGA Tour can be emboldened to try and snuff this entire thing out from the start, rather than feel like they need to appease a bigger part of their important membership by working with Norman on a calendar or talent-sharing agreement.

Instead, though, Norman’s efforts so far have led to very little. There’s not even any kind of distribution agreement in place, beyond a vague allusion to YouTube carrying the June event. Norman’s decision to become a patsy here (and a poor one, at that) could end up being the biggest humiliation of his entire career. Considering it’s Greg Norman we’re talking about, that’s not a small thing.