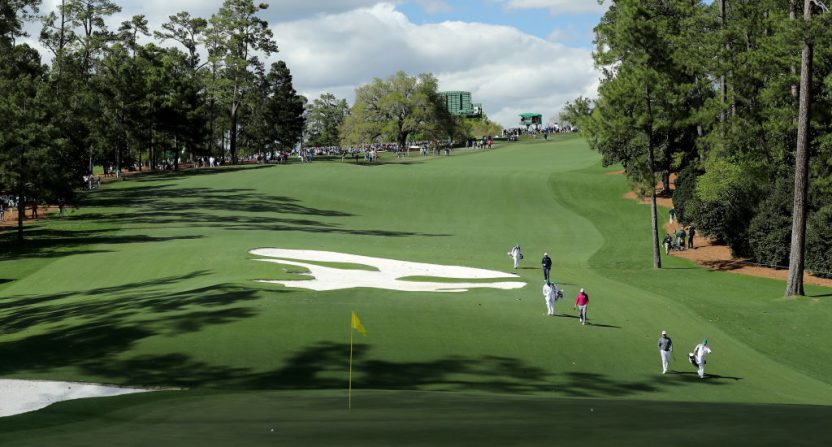 Augusta National is obviously home to the Masters, and almost as obviously one of the hardest courses in the world to play, unless you’re a member, know a member, or qualify for the aforementioned Masters. (Though the newly-announced women’s amateur event will provide another welcome and overdue avenue.)

There is another way, though. Every year, 28 members of the media assembled to cover the event get picked out of a lottery and invited to play the Monday after the Masters. It generally leads to a few pieces by those media members every year; last year’s best (and one of the best ever) was Kyle Porter’s lovely, emotional essay.

This year, the early favorite is Steve Politi’s piece for NJ.com in which he gives the blow-by-blow of his round. Except all the blows were gut punches delivered by the golf course.

My God. What have I DONE? ?☠️ pic.twitter.com/NbTzRsAsbj

It started before Politi got to the course, when he realized he’d have to get some reps in ahead of his first round of golf in a decade. That led to an impromptu match against Yahoo’s Dan Wetzel. At an Augusta putt-putt course.

“I’m playing Augusta National on Monday,” I told the teenager behind the counter as she handed me a brightly painted green ball.

“Wow. Well, the red course is the hard one!” she replied, helpfully.

I used my borrowed putter and aced the first hole. Boom! I was back, baby. Nutley High in the House.

But Wetzel, my match-play opponent, took back the lead on the next hole and started piling on. I took an embarrassing 5 on a hole. The giant plastic giraffe was literally looking down on me. If CBS were covering this, they would have stopped showing my shots on the back nine. I lost by seven.

What’s great about Politi’s piece is the detail, and how willing he is to dive into the nuts and bolts of a hacker on a bucket list golf course. Most people obviously wouldn’t play well at Augusta, and most media members don’t. It’s really hard, even from the member’s tees, especially with the tournament setup affecting the greens. But that often manifests with people glossing over their actual rounds, saying things like “Well, I didn’t play that well, but I hit a few great shots” and then talking about the great shots.

Politi, though, gives us the real story:

I three-putted for 8 on the opening hole, then knocked my drive on No. 2 into a magnolia bush and made 10, and then could have turned footage of my putting on the No. 3 green into a montage with Benny Hill music. I was 20 over through five, which meant I was playing quadruple-bogey golf.

Nothing matched the disaster on No. 6.

The downhill par-3 is one of the best places to watch the Masters because it also gives you a great view of the 16th green — which, thanks to a wild hook, is where my ball landed. The green was empty, at least. Perhaps the golf gods hadn’t forsaken me entirely after all.

The experience itself for media members is admittedly cool for anyone who appreciates golf; presumably most golf media fall into that list. Augusta goes out of their way to theoretically make you feel like a member for a day. You get a caddy, you get to use the champion’s locker room, etc. It’s designed to make you feel like a pro. But one thing they can’t do is hit shots for you.

Politi’s piece is a nice reminder of just how good players are, and it’s also just a fun read. Well-played, Steve.