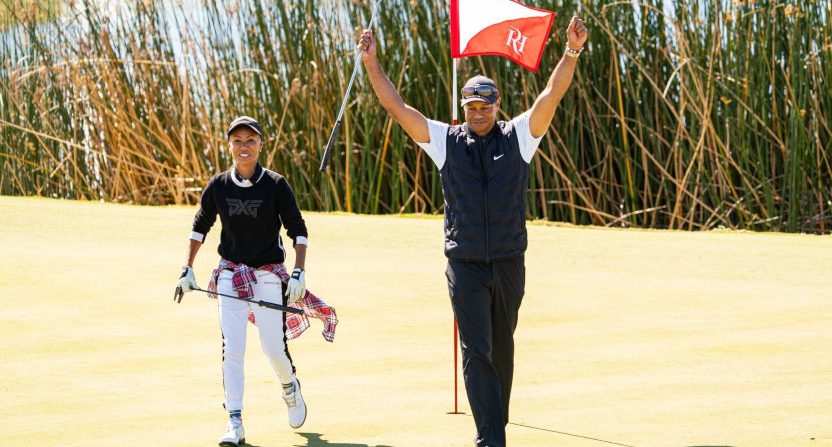 Shortly after Tiger Woods suffered multiple leg injuries in a single-car accident in Los Angeles in February, it was reported that he had been giving golf lessons to actors and other celebrities for an upcoming series in the days ahead of that crash. Well, that series (which, it turns out, was recorded just the day before the crash) has now been released on Golf Digest‘s website, with permission from Woods and the guests.

This series is four episodes, and is called “A Round with Tiger: Celebrity Playing Lessons.” It’s directed by Peter Berg (known for everything from the Friday Night Lights movie and TV series to Patriots’ Day and Battleship to 30 for 30 initial entry King’s Ransom), and it features episodes featuring Woods giving golf lessons to actor Jada Pinkett Smith, basketball star Dwyane Wade, and comedian David Spade, plus a fourth episode comprised of outtakes and behind-the-scenes clips. The first episode, with Pinkett Smith (seen above with Woods during filming), is out now, while the others will be released weekly over the next three weeks. Here’s the first episode with Pinkett Smith:

There are some interesting quotes in that episode, including Pinkett Smith talking at the start about why this opportunity to play with Woods meant a lot to her:

“It’s like a dream come true for me. It’s not about being confident. It’s just about having the opportunity to get some lessons from Tiger. My game sucks. …Will has played with Tiger before, but I haven’t. He was like, ‘Just relax, have a good time.'”

“I just got serious about the game right after Tiger won his Masters. I was like, OK, this game’s got something for me. I’m going to take it seriously. I’d like to get some of that Tiger magic. Maybe I’ll get lucky, and he’ll rub some of his magic on my golf game. I would like to figure out how I can get a bit more distance. Hit it straight, make some putts. Everything, basically. I’m going to have a good time today.”

Here’s more on the series from a Discovery (Golf Digest‘s parent company) release, as well as a poster for the series: 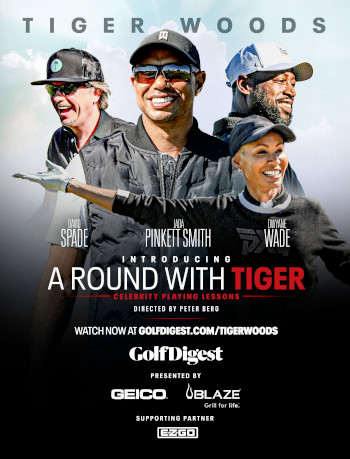 Today, Discovery’s Golf Digest debuts A Round with Tiger: Celebrity Playing Lessons, an exclusive four-episode series starring global sports icon Tiger Woods that unveils a different side of one of the greatest athletes to ever live. The Peter Berg-directed series shows a relaxed Tiger engaging with his celebrity friends and sharing their perspectives on life, fatherhood and golf.

The content was captured in February, the day before Tiger had his unfortunate car accident, from which he is still recovering. With this knowledge, the deep and poignant conversations will undoubtedly resonate even more strongly with viewers. The series is being released with the blessing of Tiger and his guests. Discovery and Golf Digest thank everyone for their involvement and wish Tiger a continued speedy recovery.

…“Shooting this series was some of the most fun I’ve ever had filming on the golf course,” said Woods. “Each guest brought a unique perspective on life, both professionally and personally. I’m always inspired by others who are considered the best at what they do and learning about how they made it to the top. I was pleasantly surprised by Jada and David’s golf games, and Dwyane, who just picked up the game, made a lot of progress in the time we spent together. Each episode provides something that everyone can enjoy and learn from, so I’m happy to share these lessons and conversations with the world.

…“It is always a privilege for our team to work with Tiger and we’re excited to have these special guests come together to create this unique series, which so perfectly blends golf and life,” said Chris Reynolds, General Manager, Golf Digest. “The teams at Discovery and Golf Digest have built such a close relationship with Tiger over the years, and this resulted in some of the most enlightening, engaging content we’ve ever shot. We thank Tiger for allowing us to move forward in producing this series even after his accident and wish him a continued speedy recovery.”

It’s certainly positive that Discovery/Golf Digest not only got permission to move forward with this from both Woods and his guests, but also made that very explicit in their press materials about this. Woods’ accident after this filming dramatically changed the context of this series, and if there was any sense that this wasn’t what Woods or the others involved wanted, this would be a questionable move. But if he and his guests were fine with it still going through production and going to air afterwards, it seems fair to put it out, especially with those quotes both inside and outside the first episode indicating that this meant a lot to both Woods and Pinkett Smith. And maybe this series will be a welcome watch for those looking to get more insight into Woods and how he interacts with people.