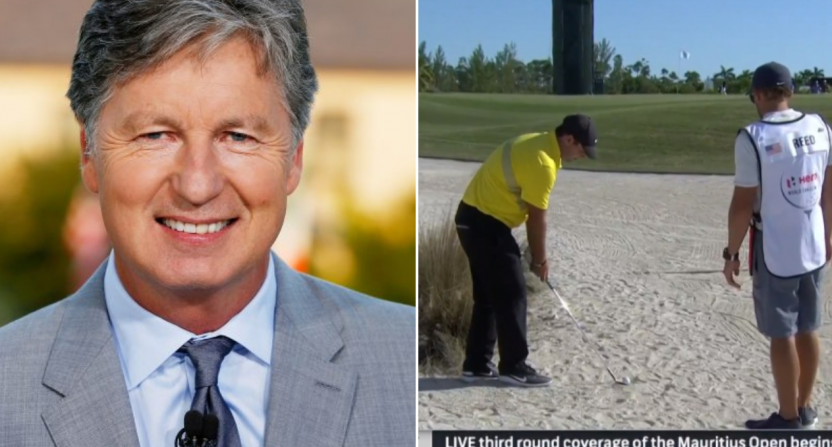 Patrick Reed has been embroiled in the aftermath of an incident in early December, when cameras caught him twice improving his lie in the sand.

I'm dying at the idea that any Tour pro wouldn't notice catching sand not once but twice on a backswing, and then dying all over again when it's so obviously an effort to improve his lie, and dying a third time at his professed indignation. pic.twitter.com/SxblEXPYim

More videos emerged after of Reed doing the same thing in a previous edition of the tournament. Since then, Reed turned in a dismal performance at the Presidents Cup in Australia, an event that saw him mocking the cheating by taunting fans with a shoveling motion. (Oh, and his caddie/brother-in-law got into a physical altercation with a fan, too.)

Reed’s only discipline was a two-shot penalty. The only publicly visible discipline for his caddie came at the Presidents Cup, when he wasn’t allowed to caddie for Reed during the final day of matches. This has had the effect of extending a news cycle that may have otherwise died down; this past weekend, a fan yelled “Cheater!” when Reed was in a playoff with Justin Thomas at Kapalua.

Hicks reacted as though Reed had been slurred somehow. It’s not a stretch to assume that Reed might face this kind of thing for a while, and while he said after that he didn’t hear the heckler, we learned yesterday that Reed isn’t tuning everyone out.

“The purpose of this letter is to obtain assurance that you will refrain from any further dissemination, publication or republication of false and defamatory statements concerning Mr. Reed, including any allegations that he ‘cheated’ at the Hero World Challenge in the Bahamas,” wrote Peter Ginsberg, a partner at the New York City law firm of Sullivan & Worcester.

Ginsberg, who previously represented Ray Rice and has sued the PGA Tour on behalf of Vijay Singh and Hank Haney, confirmed to Golfweek that he represents Reed and sent the letter.

The letter was dated and received by Chamblee on Dec. 13.

This is, obviously, ridiculous. There’s no legal basis at all here. Chamblee doesn’t seem concerned, either:

“My job is to be accurate in my analysis and I weigh my words heavily,” Chamblee told Golfweek. “Nothing I said on the air did I say flippantly. I thought about how exactly to say it to get closer to the larger point about the traditions of the game. That’s the origin of my remarks. They had no malice. They were meant to be accurate and admonishing about the decay of the traditions of the game. Instead of self-policing it’s catch-me-if-you-can. And that bothers me.”

Seeing an analyst receive a legal letter because an athlete doesn’t like the tenor of their commentary is a new frontier. It’s also another way the news cycle isn’t going to die, and it’s a sign that Reed is fully committed to his fantasy world where he’s the victim, a narrative that a lot of broadcasters have been too willing to play along with so far. But most of all, it’s an example of how little self-awareness Reed has; this letter was always going to make him look worse than anything Chamblee said on Golf Channel.