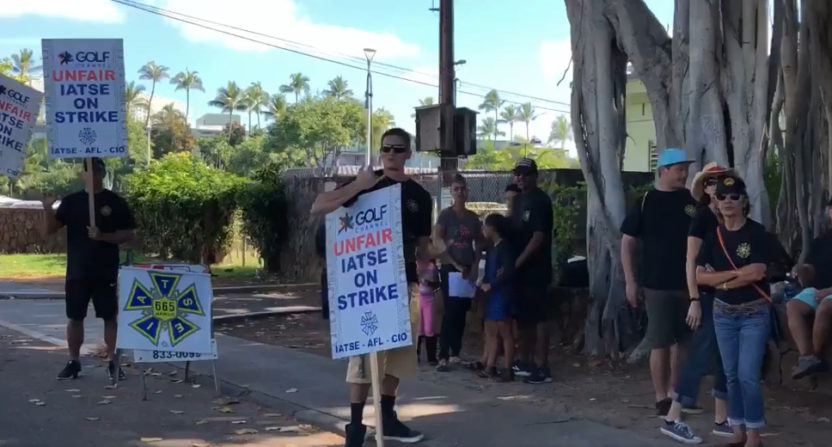 On Sunday morning, union workers involved in audio and video production for three Golf Channel tournaments walked off the job in a protest of job conditions. That led to disruptions in coverage at the Bahamas Great Exuma Classic (a Web.com Tour event), the Diamond Resorts Invitational in Orlando, and the Sony Open in Hawaii (a PGA Tour event). And it led to a whole lot of challenges for the broadcasts, as described by D.J. Piehowski at No Laying Up:

Camera operators and technical crew belonging to the International Alliance of Theatrical Stage Employees (IATSE) union have been in negotiations with Golf Channel over compensation, as well as concerns with audio and utility issues, according to sources within Golf Channel and other people familiar with the situation. After threatening a work stoppage earlier this week, the strike became official Sunday morning, leaving the 11 a.m. Web.comTour broadcast in the Bahamas with a skeleton crew of non-union workers. After opening the disjointed telecast in the GC studio with Damon Hack and Paige Mackenzie talking over seemingly nonspecific highlights, the broadcast picked up coverage from on-site, obviously with a lack of cameras; coverage was seemingly limited to distant locked down shots and tower shots from the 13th and 14th holes.

The IATSE has not responded to an email request for comment. Golf Channel issued the following statement:

Golf Channel has been working on negotiating an agreement for nine months with a union that represents our live tournament technicians. Those efforts have not yet yielded a resolution, and we looking forward to reaching a mutually agreeable contract. However, some technicians have chosen to walk off the job today. We have contingency plans in place, and will continue to deliver coverage. Thank you to our viewers for the patience.

Here’s more from the Associated Press story on the strike:

Some three dozen IATSE members from Local 665 picketed outside the main road into Waialae Country Club in support of the Golf Channel’s technical crew. John Culleeny, an international representative for the union, said its members wanted Golf Channel to meet industry standards. He was not specific on the talking points that stalled negotiations.

The video and audio crew had talked about walking out during the third round Saturday but held back for another meeting. Culleeny said the next meeting was scheduled for Tuesday.

Golf Channel is producing three tournaments next week — the CareerBuilder Challenge, another Web.com Tour event in the Bahamas and the Mitsubishi Electric Championship, a PGA Tour Champions event on the Big Island of Hawaii.

Along with the Sony Open, Golf Channel is televising the second round of the Web.com Tour event in the Bahamas, a 72-hole event that ends on Tuesday. It also is televising the unofficial Diamond Resorts Invitational in Orlando, Florida, for players from the PGA Tour Champions, LPGA Tour and celebrities.

The PGA Tour sent a message to players in the Bahamas Great Exuma Classic about what to expect:

Here was the message communicated to the field at the Bahamas Great Exuma Classic pic.twitter.com/ySEJDfx3ZE

Here’s a union statement No Laying Up received from a source: 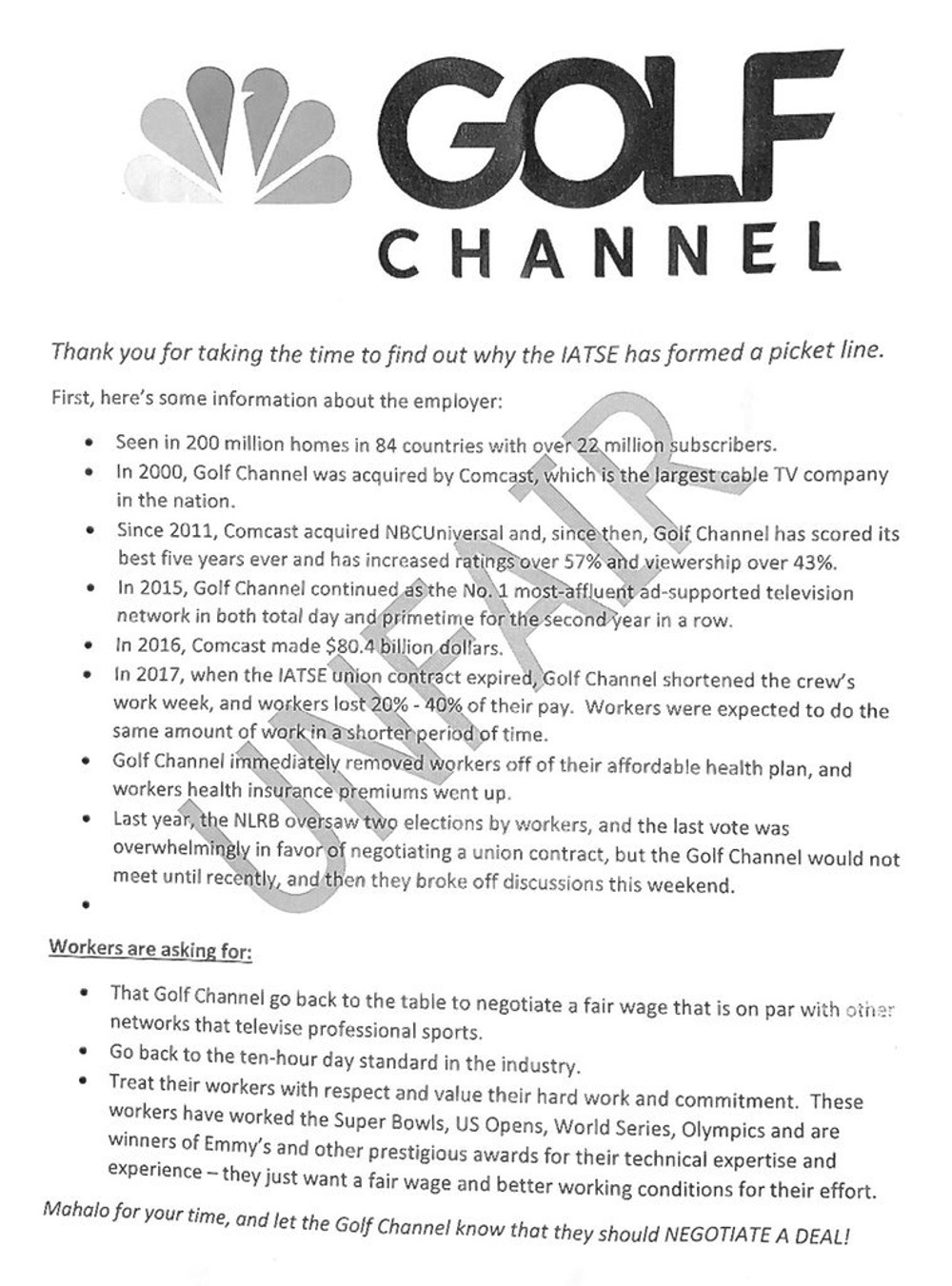 John Culleeny, a representative for the International Alliance of Theatrical Stage Employees, said in front of picketers that last-minute talks broke down, leaving them no choice but to organize a strike.

“We’ve been in negotiations with Golf Channel for second contract for nine months, and they’ve proved fruitless. We rejected one vote a while back and when they put their last proposal out, 83 percent of our members rejected it,” Culleeny said “After a couple of last minute talks, nothing happened so we just pulled the crew today. We pulled the crew in the Bahamas and we pulled the crew in Orlando.”

Culleeny said that the major issue the union and its workers have with Golf Channel is discrepancy in pay.

“The biggest issue is the fact that Golf Channel wages are below industry standard, below what other people are making,” Culleeny said. “We have people who are stay at home, work regionally in San Francisco, San Diego, Los Angeles, Phoenix, New York, whatever. They make more money than people who go on the road for the Golf Channel. And they have to leave their families, stay in a hotel room for weeks at a time, and they’re getting paid less than people who stay home. We want parity.”

It’s notable that this strike happened with tournaments in a couple of remote locales with the Bahamas and Hawaii, making it harder to break with non-union hires. That led to significantly reduced coverage at these events, and fans watching the Sony Open Sunday night were particularly unimpressed, especially when it came to the playoff between James Hahn and Patton Kizzire:

This is embarrassing to watch… @GolfChannel should never be allowed to broadcast again.. @PGATOUR #SonyOpen

Oh, look, somebody found the zoom on the camera ? #SonyOpen

Feel like there’s going to be a 30 for 30 made about this @GolfChannel @SonyOpenHawaii broadcast.
“What if I told you…there were more playoff holes than cameras available.” #SonyOpen

More Playoff holes than cameras on the course. What an exciting mess.#PGA #Sonyopen

@GolfChannel @PGATOUR this coverage is horrible. How do you not show every shot of a playoff? #SonyOpen

Apparently there is a golf camera man strike. This playoff and the coverage has set golf broadcasting back to the days of Shells wonderful world of Golf. Arny and Gary were better than this #SonyOpen

This @PGATOUR camera coverage is laughable. They can’t track the ball for anything #endthestrike #SonyOpen

Kudos @GolfChannel camera guy in the blimp following a little white ball from 1500 feet and @GeorgeSavaricas for calling the action from 6000 miles away! #SonyOpen

Level of play at the @SonyOpenHawaii has officially become equal to the broadcast quality. #SonyOpen

Why in the hell is the GC tweeting anything about the Sony Open. Your coverage is a complete embarrassment! ????

Live look at the lone camera man on the course running back to #17 again. #SonyOpen pic.twitter.com/qHunmTB4ge

If all golf were announced like this, I would quit watching!#SonyOpen

The Blair Witch Sony Open. No idea what angle you’ll get or if it’s in focus but you can’t take your eyes off it.

I know this is about the union strike, but I’d like to give props to the 2-3 man camera crew that didn’t ask to be a one man band today, but managed it even if it was shit. They deserve a little credit considering circumstances. #SonyOpen #PGA #GolfChannel

For what it’s worth, Kizzire eventually won on the sixth playoff hole, sparking some sighs of relief:

And the @SonyOpenHawaii has come to a merciful end. Patton Kizzire with the putt to win on the 6th playoff hole. And @GolfChannel’s bare bones coverage ends. What a Sports Sunday.

Its over, its finally over Patton Kizzire wins the #SonyOpen and its bizarro world final round telecast

So yeah, those aren’t great reviews. And it will be interesting to see where this goes from here. There are some big tournaments coming up for Golf Channel, including the PGA Tour’s CareerBuilder Challenge in La Quinta, CA next weekend. If the broadcasting situation isn’t sorted out by then, there may be even more upset viewers.

[No Laying Up; screencap from a @TarynHatcher video]