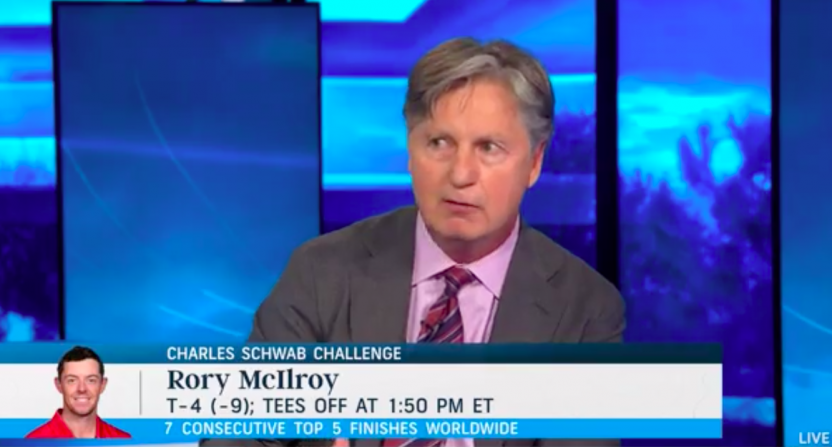 Brandel Chamblee is a former PGA golfer known as the longtime lead studio analyst for the Golf Channel and as someone who has made a name for himself with strong opinions about various aspects of the golf world. He’s amassed quite a following on social media, specifically on Twitter where he has over 200,000 followers.

Turns out, however, Chamblee doesn’t appreciate many aspects of the social media experience.

Brandel was on Golf Channel’s Golf Central Pregame program on Saturday alongside host Rich Lerner when a conversation about Rory McIlroy’s mental toughness suddenly sailed right when Chamblee went off on a tangent about the “cesspool” that is social media. Specifically, he seemed concerned with the way social media “skews left” and how that, in and of itself, is the cause of said cesspool.

“We live in an era where the negativism and the narcissism would make the Roman emperor Caligula smile. So you need to arm yourself against that. Especially if you’re on social media because there are fabulous aspects of social media, there absolutely are, but it can also be….it’s been well-documented…it skews left and it can get to be a cesspool if you’re on it.”

Lerner pushes back on Chamblee, asking him to clarify what he means by skews left, which then causes Chamblee to explain himself in a way that doesn’t seem to explain anything at all.

Lerner: “Hold on, when you say ‘skews left,’ you mean left politically?”

Lerner: “But what does that have to do with McIlroy, I don’t understand…”

Lerner: “Pardon me for a second, but I don’t understand what that has to do with McIlroy. The fact that it skews left, as you’re saying.”

Chamblee: “Well it skews young, it skews left, and it skews negative, so it’s not necessarily representative of everybody that gets on there.”

Like Lerner, we are still left wondering what any of this has to do with Rory McIlroy and why Chamblee feels so adamantly that Twitter is a young, left, negative hellscape from which no one can escape. Viewers were also left scratching their heads about where any of this came from and why it mattered in a discussion about golf.

@SarahSpain it’s not often you get to watch a professional broadcaster walk into a buzz saw live. For no reason other than to say @twitter is liberal propaganda. Which is what Brandel Chamblee did this morning on @GolfCentral

@chambleebrandel showed true colors today. Are there crazies on social media? Yes. But linking online darkness to the political "left" was neither accurate nor relevant to the conversation. In fact, he proved his own comments are biased…to the right.

Turns out, longtime viewers of Chamblee likely weren’t too surprised by the thought process. Back in 2017, Chamblee wrote a lengthy rant of GolfChannel.com about how golf should “ban Twitter,” whatever that means.

I can understand the discord involving politics, religion, and war but what is there to argue about in golf, I mean besides the fact I am still paid to talk about it for a living?

Somewhere between the bottle of wine your neighbor opened last night and the Arab Spring movement, Twitter is the most narcissism-inducing, vanity-vomiting, muckraking scourge of harmony and aggregate source of everything one needs to know, time-suck in history.

The irony of a guy like Chamblee being such a fierce anti-Twitter and anti-social media bastion is that his whole schtick is tailor-made for the social media era. He’s made a career of making over-the-top statements that sometimes get him into trouble, exactly the kind of “vanity-vomiting” he seems to detest. This year alone, Chamblee has been threatened with legal action for referring to golfer Patrick Reed as a cheater and recently had to apologize for using the term “bitch-slapped” in an interview about golf swings, of all things.

Chamblee claimed in that 2017 column that he had to “block on average about 10 people a day,” which isn’t something a normal person on Twitter has to do. That’s usually only the case when you’re purposefully making outlandish statements and baiting people to come after you. As our Jay Rigdon put it in 2017, Chamblee “comes across as someone who is very comfortable lobbing bombs from the confines of a studio, and very uncomfortable now that people keep tabs on those opinions, check them for accuracy, and have an easy conduit with which to inform him he’s wrong.”

So while it’s become a cliche to use this as an example, a certain scene from the TV show “Justified” comes to mind to provide context to Chamblee’s self-inflicted predicament and concerns about the root cause of the social media “cesspool.”