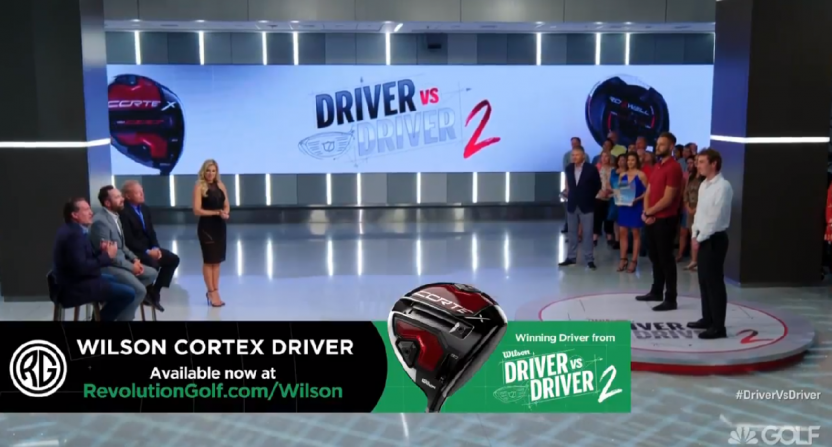 Golf Channel’s Driver vs. Driver is a reality series where designers pitch their concepts for driver to judges (including, randomly, Jeremy Roenick) and Wilson Sports, with the winner receiving $250,000 and their club as the next Wilson driver.

Season two concluded last night, the last of seven episodes. It’s not exactly essential viewing, but it can be entertaining if you’re a golf fan looking for weeknight primetime viewing, and especially if you’re really into the world of golf equipment. Some of the most interesting aspects of this season involved the behind-the-scenes looks at what goes into actually producing and testing prototypes, and the real numbers the clubs were offering testers.

Last night’s finale, though, would be familiar to just about anyone who’s watched a reality series from start to finish. With the final two contestants already locked in and the big reveal not coming until the end of the hour, it was essentially a clip show. Then, near the end of the hour and at the beginning of the final segment, right as Roenick launched into a monologue praising the accomplishments of one of the contestants, a graphic popped up naming one of the designs as the winner, and announcing it was available for purchase.

Golf Channel apologized and scrubbed the moment from replays:

Driver vs. Driver is perhaps a slightly cursed production; after season 1, the winning design was briefly ruled non-conforming by the USGA. It also overshadowed an interesting deviation from reality show form, as the show essentially bent their own rules to pay for the runner-up’s senior year at Oregon State, while also offering him a job when he graduated. That was nice! (He ended up taking a job at Nike.)

Given how quickly shows like this attempt to capitalize on the winner, it’s surprising this kind of thing doesn’t happen more often. It’s unfortunate it happened to Golf Channel here, too. But it is funny. And hey, we’re talking about Wilson products! That has to be a win.