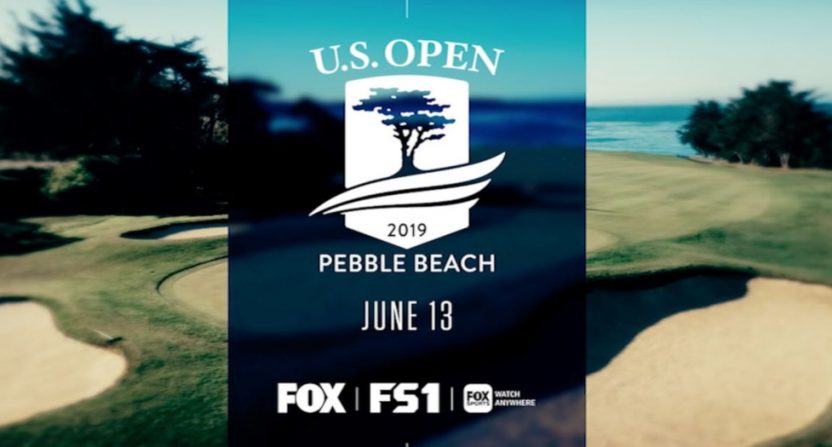 Thursday’s coverage of the first round will start on FS1 at 12:30 p.m. Eastern and continue through 7:30 p.m. Eastern, at which time the main broadcast will switch to Fox. However, FS1 will stay on the air as well with a separate broadcast focusing on two high-profile groups. John Ourand has more at Sports Business Journal:

Fox Sports will use FS1 as an alternate feed during the U.S. Open’s first round on Thursday from Pebble Beach. When Fox starts to carry the tournament on its broadcast channel at 7:30pm ET, FS1 will remain on air and follow two groups — one with Tiger Woods, Jordan Spieth and Justin Rose that tees off at 5:09pm and another with Brooks Koepka, Francesco Molinari and Victor Hovland that tees off at 4:47pm.

Fox has used alternate feeds digitally, but this marks Fox’s first foray into using one of its linear channels as a second feed. “I was watching other sports and seeing how other people handle big events,” said Fox Executive Producer/USGA Mark Loomis. “There are times when you think you could be competing with yourself. The thought I had over the winter was ‘what’s the way to get more peoples’ eyes on the U.S. Open?’ I thought this might work.”

Because of commitments it has with the FIFA Women’s World Cup and MLB games, Fox is only using FS1 as an alternate channel on Thursday. Ad breaks will be the same across Fox and FS1, Loomis said. “We’re viewing this as a great second- or third-screen application,” he added. “People will still mainly want to watch the main broadcast with all the golfers.”

The FS1 broadcast Thursday will see Justin Kutcher on play-by-play, with Mark Brooks as an analyst, Michael Breed and Nicole Castrale reporting from the course, and course architect Gil Hanse also contributing as an analyst. Loomis told Ourand that group “will have more time to dive into the background and strategy,” which should let them showcase Hanse’s knowledge of course design in general and of Pebble Beach’s course in particular. Hanse is listed in Fox’s general release as well, so he may also appear on the main broadcast, but this may be a particular chance to feature him.

It’s interesting to see Fox going to a linear alternate feed, as that’s a larger move than they’ve made before with digital alternate feeds. And it’s notable that it’s on a pretty accessible channel in FS1, not a secondary one like FS2. But golf in particular seems like a good place to play around with alternate feeds, as there are always fans who want the broadcast to focus more on a specific group (or complain about it focusing too much on a different group).

This way, Fox can tell people they’ll have a standard broadcast plus one that’s focused on stars like Tiger Woods, Brooks Koepka and Jordan Speith, and viewers can pick which of those options they prefer. We’ll see how many choose the alternate feed, though. That will probably tell us something about if we’ll see something like this again.