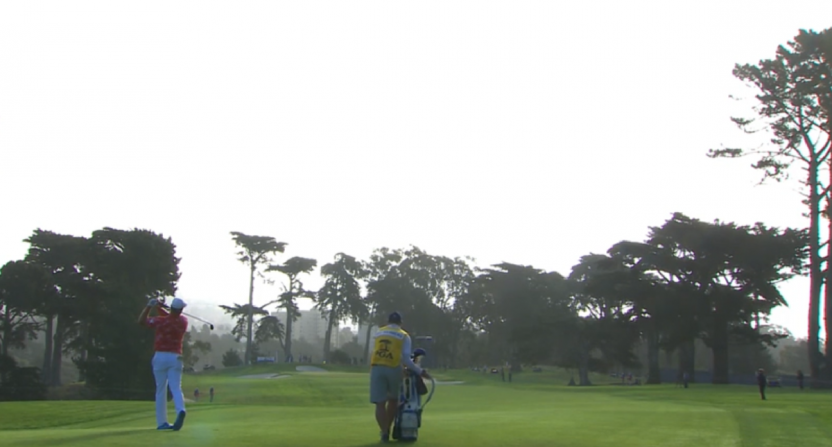 This week’s PGA Championship at San Francisco’s Harding Park marks the return of men’s major golf for the first time in more than a calendar year.

It also serves as ESPN’s first year on a new deal, as they take over for Turner in collaboration with CBS. Unlike for ESPN’s similar deal to broadcast the first two days of the Masters (which is a CBS production), they have more independence with their production, and according to Geoff Shackelford they’re actually paying even more than CBS through the life of the deal. Golf is set to be a big part of ESPN’s streaming inventory, with PGA Tour Live coverage coming to ESPN+ in 2022 as part of the next round of PGA Tour rights.

The PGA Championship, meanwhile, sees extended coverage ahead of network ESPN’s evening window, and yesterday’s debut was a welcome return for ESPN’s golf coverage. For years, their work at the Open Championship served as perhaps the platonic ideal; essentially sunrise to sunset, with shot after shot after shot a welcome replacement to the typical weekly filler we see during PGA Tour events. That was intentional; as anchor Scott Van Pelt pointed out to media during a pre-tournament press call.

I mean, I think people — what people want is the minute someone has a tee in the ground and the ball is in the air, they want to be able to see it. The exciting thing about what we’ll be doing with ESPN+ and ESPN is very similar to what we did with the Open Championship, that if someone is playing, I don’t want to overstep what is going to happen in terms of being able to deliver, but I mean, if people are playing, we’re on the air somewhere. That’s what I think people want.

The idea that the technology exists in 2020 that would provide for that is a reasonable sort of a feeling. Every different ruling body has different feelings about how they want to broadcast, what they want to do, and I think we’ve shown that if people are — if their want is for us to be on the air, we will.

So the ability with Plus and with ESPN to be on the air from the first swing to the last putt, it creates some long hours, and God knows over in the Open Championship the sun stays up until late at night, man, you can be kind of hangry out there if you’re in the tower somewhere and you’ve been talking about golf for 14 straight hours, but I think that’s what people want. People just want to see the golf.

So I think what’s fun about what we’re going to try to do is that ambitious approach, that you’ll be able to find it on ESPN or ESPN+ when golf is being played.

They delivered on that promise, too:

That's 1.87 shots shown per minute, or one shot every 32 seconds (not including tap-ins). And those numbers somehow still feel small compared to how fast the show is moving!

Fast-paced golf on TV is *good* golf on TV. Hoping this stays the case for the linear broadcast.

Well this will easily be the most shots I've ever seen in one day of watching golf. Not perfect (and never will be), but overall, ridiculously good coverage of that opening wave.

And while the bonus hours were only available for paying ESPN+ subscribers, it was still good to have that option, as opposed to prior years when Turner spent Thursday and Friday morning running their usual Charmed and Supernatural reruns.

Having both ESPN’s commitment to actually showing golf and some of their longtime golf voices back on the air was a very welcome thing.

We did about 3,000 golf shots on ESPN +. That was a blast. Everyone complains about everything though. It’s fine. We are here and happy to be doing golf.

hearing Sean McDonough do golf again be still my heart

Now McDonough ( +Duval) openly mocking Bryson and his recent interactions with rules officials. A normal conversation people who consume this sport have, but one you would probably never hear on a PGA Tour broadcast.

Wright Thompson essays make this feel more like a major.

While pretty much everyone was happy with the coverage itself, there were some complaints about the ESPN+-exclusivity in the morning wave.

It's premium coverage. I realize folks are upset that the only option to watch the tournament is to pay, but they really are delivering a big time product. Can get three screens going, and the SVP/Duval combo is fantastic. https://t.co/tmGxrwx5Zp

Mr Van Pelt you are the best part of ESPN by far!…..your employer pushing a ton of golf behind AP pay site (ESPN+) is hot garbage. Golf Channel/CBS has done it right

On one hand, it’s understandable if you’re paying for a satellite, cable, or streaming service that offers ESPN you’d want to be able to watch coverage during the day. On the other hand, this isn’t coverage that was previously available that ESPN moved behind a paywall. This only exists because ESPN+ exists, and even if you just signed up for one month of service for it, considering the quality and volume of shots today, it was worth it for golf fans.

It was just good to have ESPN back in the world of golf production. We sadly lost Fox’s US Open work this year, and ESPN is now basically the only non-NBC/CBS golf American golf network, and even then only for these few days. It’s important to appreciate that while it’s happening.