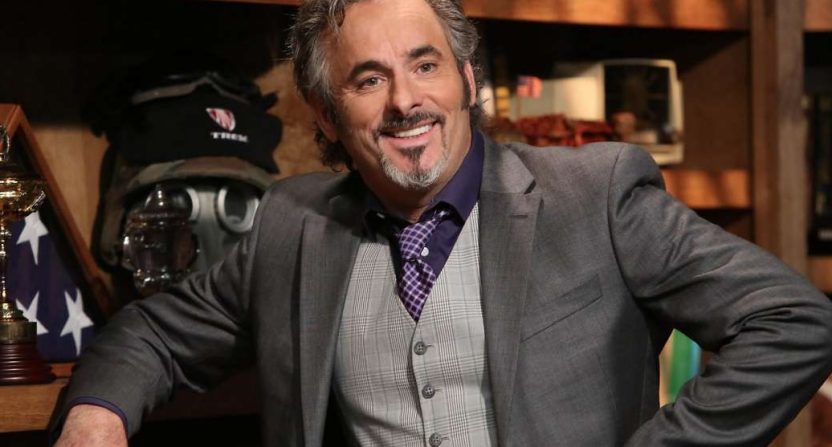 David Feherty built a decades-long career working on CBS and NBC golf broadcasts. He also hosted ten seasons of his eponymous interview series on Golf Channel, and worked the Olympics for NBC as well.

Now, though, he’s joined LIV Golf as the Saudi-backed startup league’s lead analyst. (For a broadcast that, for the moment, remains confined to YouTube and other streaming platforms.) Feherty even received a typically odd LIV-produced welcome video.

While the wider golf world has so far this week been focused on things like Nick Faldo’s retirement and the PGA Tour winning an early legal battle against players trying to play both LIV and Tour events, Feherty offered some transparency over the weekend as to why he joined LIV. Speaking on stage at a charity gig in Toledo, Feherty gave multiple reasons, one refreshing and one frustrating.

David Briggs covered the event for the Toledo Blade, and his breakdown is worth a read. The relevant quotes:

Asked the other night why he left NBC to join the Saudi-funded LIV Golf Series, the popular announcer and funnyman cut straight to it.

That’s the reasonable answer! It’s still a moral question, of course, thanks to the source of the funding. But Feherty isn’t Phil Mickelson or Dustin Johnson; he isn’t worth hundreds of millions already. Yes, sure, he was likely much more than comfortable, but it’s still a different equation for him. More than the morality, though, it’s just refreshing to hear someone say it out loud, after hearing a parade of players pretend it’s about spending more time at home with their families in a damage control effort.

Where Feherty gets off track, though, is his further reasoning. (You didn’t need further reasoning, David! You’d given the most palatable answer for the court of public opinion!) While noting that he’s also never been a lead analyst until now, Feherty implied that he’s been muzzled by people too easily offended by his brand of humor.

“There are people waiting around every corner hoping to be offended by something. [Expletive] those people. Our lives are being shaped by small groups of mean-spirited people who have no sense of humor. We’re in danger of losing our national sense of humor because of this.”

This is, of course, the standard reasoning trotted out by the #CancelCulture crowd whenever they want to be able to make bad jokes without facing any consequences. The idea that David Feherty, who continues to be paid increasing sums of money to speak on television, has somehow had to operate within some sort of creative restraints that have hampered his career feels fairly ridiculous.

Comparing himself even obliquely to Charles Barkley is like comparing apples and oranges. That’s beyond the fact that working for LIV means working for a product funded and watched over by the Saudi government, an entity that isn’t exactly known for their sense of humor or allowing media members to speak freely. Not to mention that he’ll be right back in the same boat should LIV actually find a linear broadcast partner.

I’ve interviewed Feherty for this site and found him to be charming and insightful, despite coming off of Olympic-induced jetlag. He even got to say “fuck” on the record. Had he stuck to just pointing to the giant pile of cash delivered to his doorstep, this post would have probably been much more full of praise for his base-level transparency.

But trotting out the tired narrative that being overly politically correct is somehow killing our national sense of humor (when you call golf for a living) is as lazy as his on-air schtick has gotten in recent years.