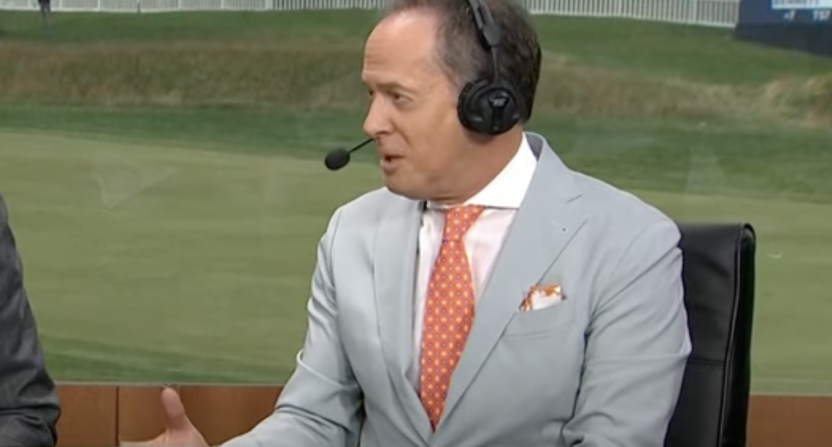 Golf’s biggest story this year has been the ongoing schism brought on by LIV Golf, the Saudi government’s sportswashing effort that has poached some big names from the PGA Tour and European Tour.

LIV has been discussed on some PGA Tour broadcasts, usually obliquely but almost always in critical terms. This week’s Open Championship isn’t governed by the PGA Tour, and many LIV-affiliated players are in the field via various existing exemptions and qualifications.

That means that unlike PGA Tour broadcasts, NBC has to navigate how to discuss players more frequently. NBC, of course, is in business with the PGA Tour, which has a vested (and some would argue anti-competitive) interest in its rights partners not legitimizing the rival league.

We got an example of how NBC might handle that today, as coverage of Dustin Johnson saw Dan Hicks sidestep even saying “LIV” when it came up:

Pretty obvious NBC has been told not to mention “LIV” on the telecast. Will be interesting to see how that unfolds this weekend if those guys are in contention pic.twitter.com/7MsE0yQdRj

Overall, the coverage of LIV players has been pretty limited, although NBC is once again using the world feed this week and might not have a ton of direct control over which players are shown when, certainly less than at their U.S. Open broadcast.

Believe DJ was the lone LIVer (TM) with several shots shown on the primary broadcast. DeChambeau had a few, as did Poulter, Koepka, Oosthuizen, Gooch and Westwood. But Will is right — very little LIV commentary. And we hardly saw Phil whatsoever? https://t.co/RSSGyocBzf

Later in the broadcast, Paul Azinger was discussing Rory McIlroy’s decision to take an aggressive anti-LIV stance and accidentally said the name of the rival league, leading to a notable pause.

This is definitely something to keep an eye on throughout the rest of the week. NBC broadcasters could end up in a bit of a tough spot if this is indeed an edict, as opposed to something that everyone on the air has their own way of handling.

Going forward, this might be less of an issue; LIV players are set to tumble down the world golf rankings barring a change to the system that feels unlikely to occur.

The coverage of this is especially interesting considering it's possible this is the last major for which some of the older LIV guys will be exempt as OWGR's crater for the remainder of the year. https://t.co/bESaHfMK5j

But LIV isn’t going away, for obvious reasons, and at some point networks are going to have to figure out how to approach this slight conflict.