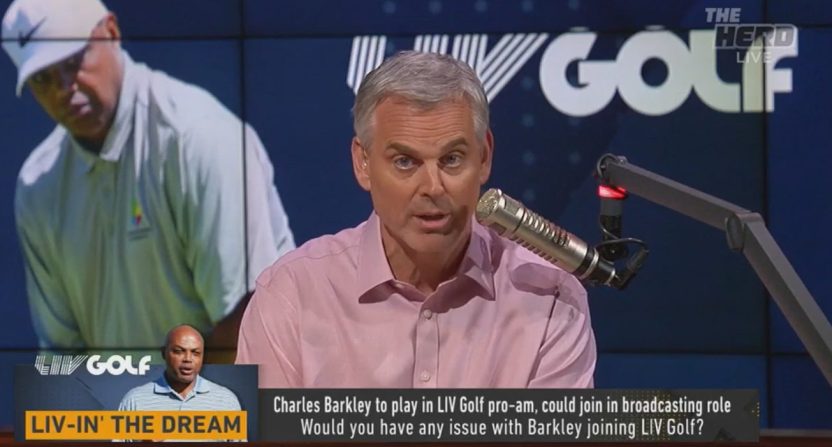 As the sports world awaits Charles Barkley’s decision on his future as a broadcaster, Colin Cowherd shared support for the basketball analyst as he mulls a potential partnership with the controversial Saudi Arabia funded LIV Golf.

LIV participants and supporters have been accused of acting as tools to help Saudi Arabia sportswash their human rights abuses. But according to Cowherd, Barkley’s not responsible for researching LIV Golf before deciding whether to partner with them.

“The company that owns you, you don’t really know. You’re not a trained journalist. I’m kind of a journalist, but I don’t know what everybody does at every company I’ve worked at,” Cowherd recently said on his Fox Sports Radio show. “I go to the store, I like eggs, bread, the products I buy, I don’t know who’s on the board, I don’t know their every move. I got six kids, I got a life. Do you have to be a Washington Post journalist for every company you use?”

“You can’t ask everybody to be a trained journalist,” Cowherd added. “You like what you like. If you like a Snickers bar, do you have to go to the board and figure out all their political, their family history? In the end, there’s been a lot of pearl clutching about LIV Golf…but it’s very predictably. When something is new and something is different and it disrupts tradition, people freak out.”

The answer is no, we’re not supposed to be journalists and investigate every company we work for, use, or benefit from. But the issues with LIV Golf and its ties to Saudi Arabia are well-documented, negating anyone the ability to plead ignorance if they partner with the tour.

“If you create a great company, I’m in,” Cowherd continued. “Now I maybe read something at some point, I’m not going to be staying at Trump hotels. I’m going to put my foot down on that. No thank you. I thought he was beyond a disruptor, I thought he was dangerous and toxic for America.”

Part of the problem with LIV Golf is that it’s funded by Saudi Arabia, a government that in addition to its own human rights violations has been “dangerous and toxic” for America, which at a minimum, can be defined by its complicity in the Sept. 11, 2001 attacks.

Although he’s made prominent headlines in recent weeks, Barkley hasn’t been criticized for his interest in LIV Golf the way Phil Mickelson and others have. Maybe it’s because he hasn’t actually signed yet, or maybe it’s because he’s been upfront about recognizing Saudi Arabia’s ties to 9/11 and acknowledges he’s talking to them for no reason other than their deep pockets.

It’s also hard for basketball fans to criticize Barkley for talking to LIV Golf and simultaneously root for him to remain with Inside the NBA.

If Barkley ends up doing both LIV and TNT, are fans going to boycott him on Inside the NBA? And if Barkley ends up remaining with TNT for more money, will basketball fans fault him for flirting with the Saudi-backed golf league, or will they just be relieved to see him sitting with Ernie Johnson, Kenny Smith and Shaquille O’Neal when the NBA season tips off in a couple of months? If Barkley chooses to join LIV Golf, basketball fans are more likely to be annoyed that they won’t see him on Inside the NBA than they will be bothered by his decision to take money from Saudi Arabia.