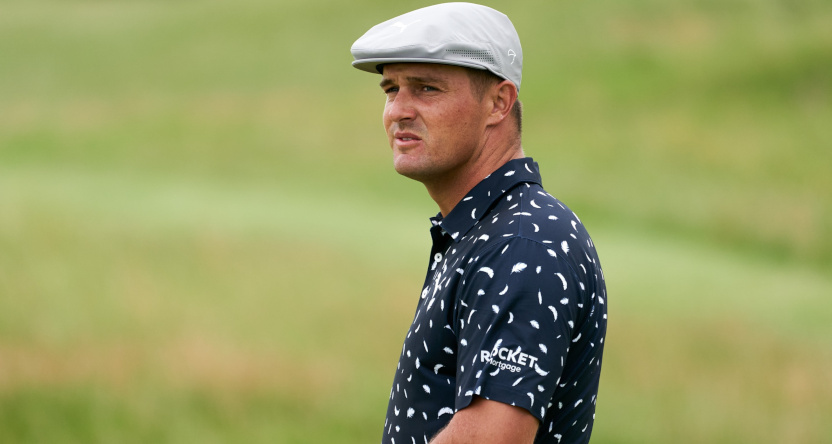 Bryson DeChambeau has managed to make golf very entertaining for even many people who don’t regularly follow golf, from his much-discussed “physics experiment” in bulking up to his feud with Brooks Koepka to his feuds with media to his sudden parting of ways with longtime caddie Tim Tucker on the eve of a tournament (the Rocket Mortgage Classic earlier this month). His latest bout of being hilariously entertaining comes from him shooting one-over-par 71 in the first round of the Open Championship and blaming the result on his driver. Here’s what he said on that, via ESPN’s Bob Karig:

After hitting just four of 14 fairways during Thursday’s first round at Royal St. George’s, DeChambeau was innocently asked if he actually felt good about his 1-over-par 71.

“That’s what I said a couple of days ago; if I can hit it down the middle of the fairway, that’s great, but with the driver right now, the driver sucks.

“It’s not a good face for me, and we’re still trying to figure out how to make it good on the mishits. I’m living on the razor’s edge, like I’ve told people for a long time. When I did get it outside of the fairway, like in the first cut and whatnot, I catch jumpers out of there and I couldn’t control my wedges.”

What elevates this beyond DeChambeau’s normal whinging that all his failures can be blamed on someone or something other than him is the response it prompted from Ben Schomin. Schomin is the Tour operations manager at equipment manufacturer Cobra, DeChambeau’s equipment sponsor and provider, and he also caddied for DeChambeau on short notice at the aforementioned Rocket Mortgage Classic after DeChambeau parted ways with Tucker. And he gave a batch of incredible quotes to Golfweek‘s David Dusek after hearing DeChambeau’s remarks here. A few selected ones:

“Everybody is bending over backwards. We’ve got multiple guys in R&D who are CAD’ing (computer-aided design) this and CAD-ing that, trying to get this and that into the pipeline faster. (Bryson) knows it,” Schomin said. “It’s just really, really painful when he says something that stupid.”

…“He has never really been happy, ever. Like, it’s very rare where he’s happy,” Schomin said. “Now he’s in a place where he’s swinging a 5-degree driver with 200 mph of ball speed. Everybody is looking for a magic bullet. Well, the magic bullet becomes harder and harder to find the faster you swing and the lower your loft gets.”

…Still, Schomin knows DeChambeau doesn’t mean it exactly the way he said it.

“We know as adults that they really don’t mean that and I know that if I got him cornered right now and said, ‘What the hell did you say that for,’ he would say that he was mad. He didn’t really mean to say it that harshly. He knows how much everyone bends over backwards for him, but it’s still not cool.”

The mental image of beefy golfer DeChambeau as an upset eight-year-old demanding another juice box is absolutely perfect. And it’s amazing to hear someone from DeChambeau’s equipment manager firing back in these terms. The full Golfweek story helps illustrate why Schomin can do that, though, and it shows why this partnership isn’t necessarily a big win for Cobra; DeChambeau’s bulked-up frame has him demanding things from clubs that no one else wants or could use, and they don’t even sell his club models to a wider market. And even making clubs for him is much harder than normal; that piece says “So far in 2021, Cobra has made seven prototype driver heads for DeChambeau, a number that might exceed what other star players have made for them in a decade.”

Look, DeChambeau can absolutely complain about his equipment rather than his own play if he feels like it. But it seems to be a fair equivalent to a quarterback throwing his receivers under the bus rather than taking personal responsibility, and that often hasn’t worked out well for many quarterbacks. And the pure and blatant “The driver sucks” is amazingly ineloquent and not subtle, and yet fitting for this guy; a more PR-minded golfer would have found milder and less insulting ways to get this point across, such as “I’m still adapting to it,” but that’s not DeChambeau.

But the best thing about this is the absolutely devastating response it prompted from Schomin, and the way that response somehow made DeChambeau look even worse than he already did. And maybe that eventually leads to a DeChambeau-Cobra breakup. But hey, that might be good for Cobra in the end; DeChambeau seems like an incredible “never really been happy, ever” pain in the ass to work with.

And if Cobra is putting a ton of effort into designing endless prototype clubs for DeChambeau that they can’t even sell to a wider audience, that doesn’t necessarily seem like a great fit. (They might even get an unusual reverse endorsement effect here if DeChambeau cuts ties with them; there are undoubtedly people eager to use clubs from a company that had the guts to stand up to the beefy golfer.) At any rate, that will be interesting to watch. But for now, Schomin’s response certainly turned this into a funny media story, and gave us a great mental image of cranky eight-year-old DeChambeau.