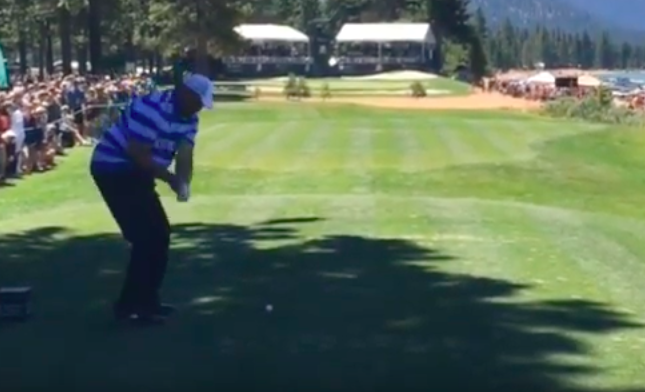 Charles Barkley is an all-time great basketball player and one of the worst golfers that has ever stepped on a golf course in the hundreds of years the sport has been played.  Barkley “competed” at the American Century Championship in Lake Tahoe this weekend and the results were not so good.

The American Century Championship is the most well-known celebrity golf tournament in existence, aka the random thing that you watch on one of the last weekends before football is back.  The tournament features some talented golfers, as well as Barkley.

What’s also great about the American Century Championship is that we can actually involve numbers to quantify Barkley’s performance on the golf course.  Below are the bottom of the standings from the weekend’s celebrity event and you’ll see quite the potpourri of athletes and celebrities who aren’t very good golfers.  Former NFL QBs Trent Green, Steve Young, and Doug Flutie, former NFL coach and current ESPN analyst Herm Edwards, the Ol’ Ball Coach, NBC’s Kathryn Tappen, and former SNL star Kevin Nealon.

Then at the very bottom of the bottom of the standings is one of the greatest things you’ll ever see.  Charles Barkley in last place… behind Larry the Cable Guy.

If you’re wondering why -100 is in last place by a country mile, it’s because the tournament uses the modified stableford scoring system.  It awards positive points for going par or better on a hole, no points for a bogey, and -2 points for a double bogey.  Thankfully, double bogey is the worst score you can get on any hole.

Here’s Barkley’s scorecard from the weekend.  You’ll notice a lot of red.  Red is not good.

Barkley scored a double bogey max on 50 out of 54 holes over the weekend and somehow found a way to eek out 4 bogeys.  By comparison, Larry the Cable Guy actually parred three holes during the tournament!  (And in case you’re really wondering, Mark Mulder won the event 174 points ahead of Barkley.) 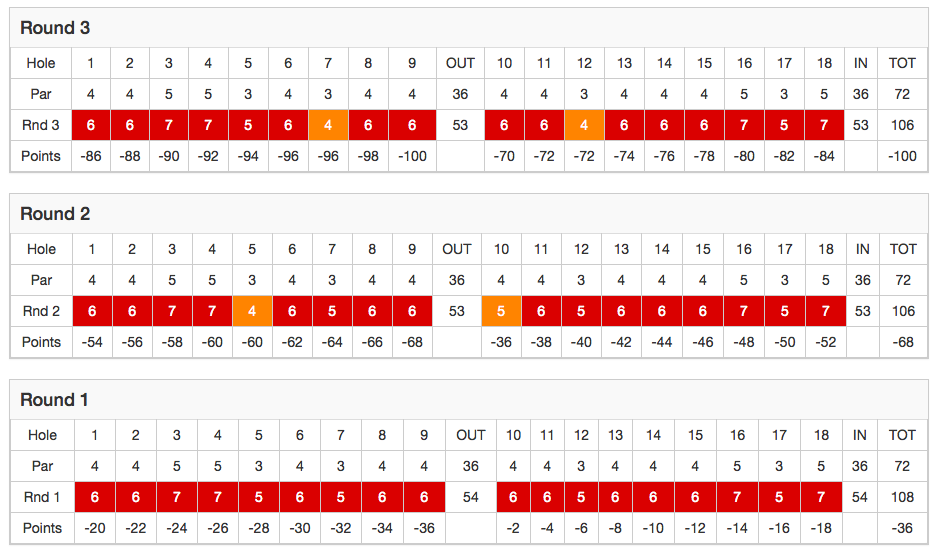 And here’s some video highlights, including Barkley giving up on a two-handed golf swing and attempting to play one-handed:

The real question is what Barkley would have shot without the cap on each hole – 140?  150? Wasn’t Hank Haney supposed to fix this and make it better?!?!

Now all I want to see is the return of Shell’s Wonderful World of Golf and a match play tournament between Charles Barkley and Larry the Cable Guy.  That could be the most entertaining thing to ever grace a golf course, or even the known universe.  They could even increase the stakes and have the loser do the other’s job for a week.  Just picture Charles Barkley doing stand-up redneck humor.