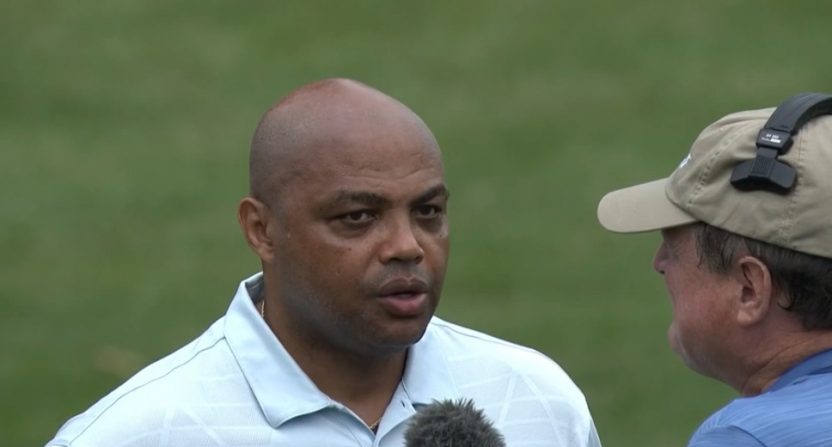 Plenty of sports figures competed in the American Century Championship celebrity golf tournament at Lake Tahoe this weekend, which even saw some awkward interviews. And a pair of broadcasters wound up in particularly notable positions. CBS NFL analyst (and active golfer, and occasional golf analyst, and former Dallas Cowboys’ quarterback) Tony Romo finished first after rallying from four points down Sunday, finishing with a 27-point day (the tournament uses a modified Stableford scoring system, giving golfers six for eagles, three for birdies, one for par and -2 for double bogey or worse) to record a 71 overall. Meanwhile, Turner Sports NBA analyst Charles Barkley finished alone in 91st and last place with -93 points.Let’s ponder the sheer magnificence of that last stat for a moment. This is a 54-hole tournament, where the worst you can do on a given hole is -2 or worse and where a bogey alone is just a zero, and Barkley still wound up with a -93. A -2 on every hole would have produced a -108, only 15 points worse. To get that, Barkley must have had at least 47 of 54 holes with a -2 for double bogey or worse; it’s 47 if his other scores were bogey (0) and one par, higher if he recorded multiple pars or something better. And his overall round scores (ignoring the scoring system) weren’t great, either; as per the leaderboard, he shot 107, 104, and 105 over the three days, with par being 72.

In fairness to Barkley, that wasn’t all that far behind his closest competitor, former NFL DE DeMarcus Ware (106, 104, 105 and a -90 point total). But it was a ways behind the rest of the pack; Rascal Flatts lead singer Gary LeVox was third-worst with a -76 point total, while NBC’s Al Michaels was fourth-worst with a -68. But hey, at least Barkley wound up higher than Arizona Cardinals’ defensive back Patrick Peterson, who withdrew after two rounds. And at least he’s perhaps improving somewhat; his golf swing has been the subject of plenty of criticism over the years, and he finished this tournament with a -100 and no pars in 2016. (However, he notched a -91 last year, so maybe this is slight regression.) And credit to him for keeping trying, and at least he recognizes his limitations, telling Golf Channel “I am choking like a dog” in a Friday interview:

At the other end of the spectrum, there were many more impressive scores from broadcasters. Romo beat out former Oakland A’s and St. Louis Cardinals’ pitcher/former ESPN and NBC Sports California broadcaster Mark Mulder (who’d won the past three tournaments and finished with a 68). Romo also edged current San Jose Sharks’ captain Joe Pavelski and former NBA star Ray Allen (they tied for third with 66 points), while former ESPN NFL broadcaster Trent Dilfer wound up with 62, tied with former tennis star Mardy Fish for fifth. But Barkley once again being at the bottom of the leaderboard is a funnier story. At least he had Ware to keep him some company this time.