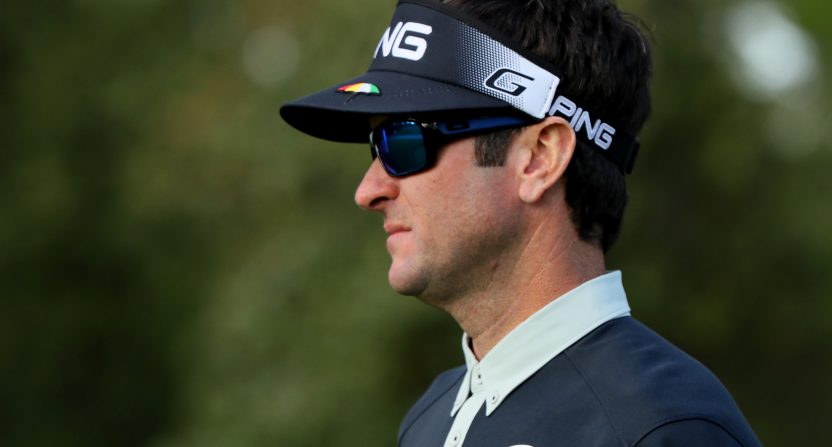 He’s won the Masters twice, of course, and won on tour last season at Riviera, but hasn’t really done anything since, aside from switching to multi-colored balls for questionable reasons. So far in 2017, his best result was a Round of 16 defeat at the WGC-Match Play.

At Augusta this week, Watson’s woes continued, as he shot 74-78 to miss the cut by two strokes. He made thirteen bogeys against just five birdies, and while conditions were certainly difficult (only nine players finished under par after the opening two rounds) the Masters cut is generally lenient (the top 50 and ties make it, or anyone within ten strokes of the leader.) +6 wasn’t exactly an unattainable number.

Given Watson’s past success at Augusta, it was obvious he was going to be asked about what happened. Watson’s answer, though, was typical of how he normally treats the media, and everyone else:

Bubba Watson after probable missed cut at #themasters: “Golf is tough; I don’t know if you’ve ever played it. But writing articles is easy.”

Watson has a reputation for being a jerk. Here’s a whole compilation!

There’s a reason the #PrayForTedScott hashtag is a thing.

All of us were stressed out while Bubba's ball was in the air. https://t.co/Uc1v68URqr

He also freaked out in Paris, and ripped fans and tournament organizers after he missed the cut there.

There are more, but for now, let’s skip to Watson’s attempt at an apology:

@Sapakoff I was joking but it was obviously a bad joke… Didn't mean to offend anyone. I apologize.

Apologies for my bad attempt at a joke today… my jokes as bad as my golf this week! pic.twitter.com/T6hVOBvcpV

Bubba is going for the same act he always goes for: a combination of a self-deprecating, “golly gee I’m just not good at this talking stuff” personality and a veiled accusation that anyone who was offended was at fault. It’s dumb. It was obvious what he meant, in the moment. Bubba isn’t exactly a master satirist.

Does he have even the beginnings of a point? Eh, at a certain level of craft, nothing is “easy” for anyone. And obviously most golf media have, in fact, played golf. It’s never fun for a professional athlete to be criticized, because often it feels like there should be a caveat explaining that relative to how the world’s population would have scored, Bubba Watson did indeed play amazing golf this week.

But that’s generally understood to be the case; the reporter wasn’t suggesting he could go out and shoot a tidy 68. Watson’s rabbit ears are legendary, if that video above wasn’t proof enough. Twitter reactions were swift:

"Listen guys, I have a ton of journalist friends! Journalists love me! I was a telling a high brow joke. Damnit!" https://t.co/uKOencYURw

Exclusive look at how Bubba writes those easy articles pic.twitter.com/GXw1WnQTZw

This is a perfect cap to a forgettable week for Watson.

It should be a lot easier to pull for someone with his abilities, but he keeps making it tougher and tougher.