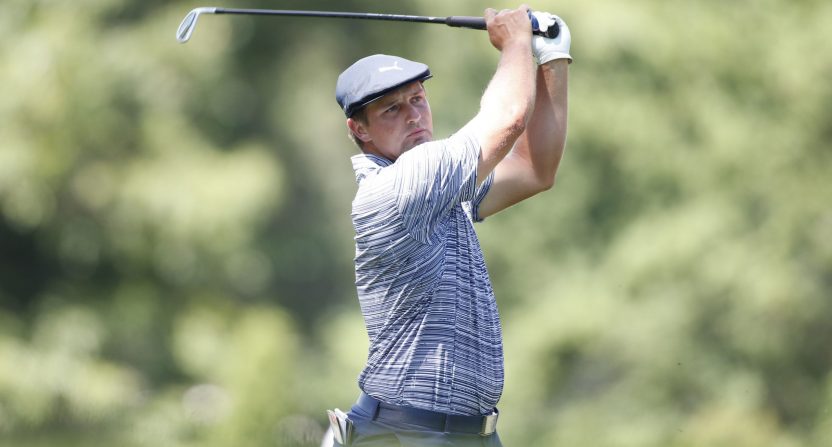 Bryson DeChambeau has been the center of attention (and gravity) throughout the PGA Tour’s return, mostly thanks to his bulked up physique and mammoth driving distance.

Today, Bryson made headlines for a different reason, when he got into a confrontation with a Golf Channel cameraman after a somewhat childish display of frustration.

Bryson running a little hot. Caught up with him on 7 where he took a Sergio slash at the sand after splashing out of a greenside bunker, muttered an expletive after missing the par save and spent 60 seconds in a…testy discussion with a cameraman on his way to 8 tee. pic.twitter.com/ENjQt1U689

Obviously in the heat of the moment, a player can understandably be upset and decide to take out frustrations on a bunker, and then on a cameraman who documented said bunker swipe.

After the round, though, DeChambeau made it clear that it wasn’t strictly an in the moment outburst, when he voiced something absolutely incredible to hear from an athlete who makes a living playing a spectator sport.

From Will Gray at Golf Channel:

“He was literally watching me the whole entire way up after getting out of the bunker, walking up next to the green. And I just was like, ‘Sir, what is the need to watch me that long?’” DeChambeau said. “I mean, I understand it’s his job to video me, but at the same point, I think we need to start protecting our players out here compared to showing a potential vulnerability and hurting someone’s image. I just don’t think that’s necessarily the right thing to do.”

“As much as we’re out here performing, I think it’s necessary that we have our times of privacy as well when things aren’t going our way. I mean, we’re in the spotlight, but if somebody else is in the spotlight they wouldn’t want that either,” DeChambeau said. “I feel like when you’re videoing someone and you catch Tiger (Woods) at a bad time, you show him accidentally doing something, or someone else, they’re just frustrated because they really care about the game. It could really hurt them if they catch you at a potentially vulnerable time.

This was the worst part:

“We don’t mean anything by it, we just care a lot about the game. For that to damage our brand like that, that’s not cool in the way we act because if you actually meet me in person, I’m not too bad of a dude, I don’t think.”

DeChambeau, essentially, is advocating for even less transparent coverage of golf, the sport that remains most opaque to viewers. What Bryson is arguing is incredibly telling; he wants coverage, but not anything that might make him look bad, or even human. He wants full control over the narrative. Imagine this in another sport, where cameras would cut away from an NBA player arguing with a ref or getting a technical, or ESPN throwing to commercial as a batter charges the mound on Sunday Night Baseball.

The problem with that is that the only reason players like Bryson make the money they make is because of fan interest in watching them play. It’s tough enough to see moments like this (which, it should be noted, was barely mentioned on the broadcast) when you can actually attend events; now, with live crowds banned, the only link to the game is through the broadcast. DeChambeau berating a cameraman for doing his job is clearly more embarrassing than any angry shot reaction may have been, and his comments seem to put more weight of responsibility for protecting his own image on a rights partner than his own choices.

DeChambeau might still be nursing a grudge from the 2018 Open Championship, when cameras caught him in full meltdown mode in a moment he apparently considered private, though media and cameras are present at the range throughout major championship weeks.

I think Bryson was stung and really bothered by that range meltdown at The Open being picked up in the background by GC cameras and I think that’s still an undercurrent for today’s comments (which are, to be clear, bad)

Bryson seemingly wants to play his golf not in a vacuum, because he clearly wants the fame and fortune that comes along with being one of the best players in the world, but through a filter approved by his own (questionably qualified) PR team. This is a player who released his own 15-minute quarantine video that included things like shirtless bacon cooking, or who wore a shirt Saturday that featured math equations (the scientist’s new clothes.) He wants attention more than maybe any other player on tour, but only if it receives his stamp of approval.

This isn’t how sports works, of course. There’s a push and pull between what viewers want to see and what athletes don’t want to give up; oftentimes, the athletes have a point. (Do we really need extended shots of sobbing collegians after their careers end? Or zoom-shots of players in agony after suffering injuries?) PGA Tour pros, though, don’t seem to get how this contract works, perhaps because they essentially run their own league and therefore are inherently short-sighted.

It came up a few weeks ago when players preemptively refused to wear microphones, with points similar to what DeChambeau voiced today. This isn’t to say that owners in other sports are visionary geniuses deserving of praise. It is to say that the one benefit of that player-owner push-pull relationship is that there’s a party involved thinking about the health of the sport long-term, even though that’s often just because their greed is working on a different timeline. (Or at least they’re supposed to; the MLB fiasco suggests it’s not automatic.)

Players should and do want what’s best for them, but too often when what’s best for PGA Tour players and the game of golf in general is something that would make them slightly uncomfortable or force a small change in habit or, god forbid, show them in a setting that isn’t hermetically sealed by a team of branding experts.

DeChambeau might be an outlier in many, many ways, but on this topic there are plenty of players who probably agree with him, at least in part. He’s trying to have his protein shake and eat it, too, but Bryson would need to be a much better scientist to figure out how to make that possible.