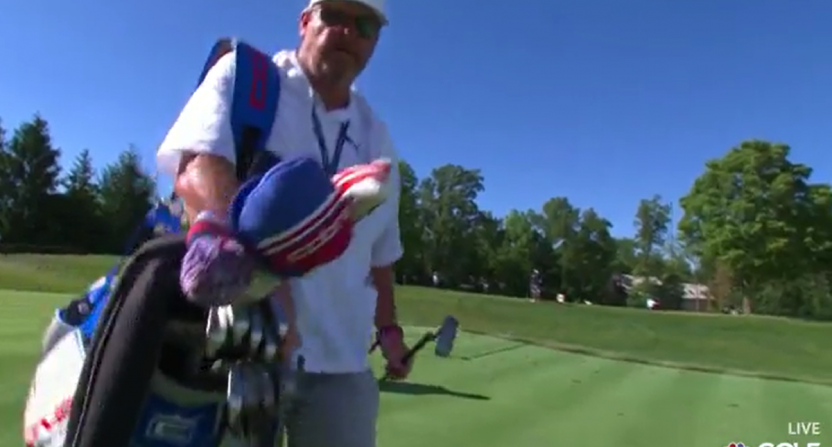 A few weeks ago, Bryson DeChambeau won the Rocket Mortgage Classic in Detroit.  The win should have been validation, on the heels of DeChambeau spending quarantine bulking up and changing his swing to gain an absurd amount of distance off the tee.

Instead it was in some ways overshadowed by an incident in which he confronted a cameraman for filming him after a poor bunker shot. That led to a post-round press conference where DeChambeau outlined his theory that networks broadcasting golf need to be doing more to protect the images and brands of players. DeChambeau later doubled down on those comments.

The problem with that is that the only reason players like Bryson make the money they make is because of fan interest in watching them play. It’s tough enough to see moments like this (which, it should be noted, was barely mentioned on the broadcast) when you can actually attend events; now, with live crowds banned, the only link to the game is through the broadcast. DeChambeau berating a cameraman for doing his job is clearly more embarrassing than any angry shot reaction may have been, and his comments seem to put more weight of responsibility for protecting his own image on a rights partner than his own choices.

DeChambeau struggled to a 73 yesterday at the Memorial despite gaining an absurd number of strokes off the tee relative to the field. Today wasn’t going much better in tough conditions, but Bryson was still very much in contention to make the cut when he stepped onto the tee at the par 5 15th hole. After hooking his drive into a hazard, Bryson dropped and attempted to go for the green anyway, powering his shot out of bounds.

Dropping again, he did the same thing. And then he almost did it again a third time, though it stayed in bounds. (He also may not have dropped legally, either.)

Bryson then went full Bryson, arguing with a rules official that because his first ball was touching the metal boundary fence (though on the opposite side, in what looked like someone’s yard), that it was actually in bounds. After the first official told him no, he said he didn’t believe him.

@NoLayingUp Bryson says “they’re giving me a garbage ruling like usual” and then something about “can’t let everything get f$&!’d?? pic.twitter.com/0s1bKGK3U0

All credit to Golf Channel for going back for that moment, too, even though it may not be great for Bryson’s brand.

Bryson just asked for the manager of the PGA Tour.

After a second official arrived, cameras stayed on him while he attempted to argue argue the definition of a fence.

Eventually, Bryson ended up forced to abandon his efforts, finishing up with a 10 on the hole and effectively ensuring he won’t be around for the weekend.

Be still my heart. pic.twitter.com/D5tL3hIcKR

Obviously this is a big moment, and a player that heated coming off a horrible score is very compelling, especially when it’s a character like DeChambeau.

After he teed off on 16, though, his caddie immediately rushed over to prevent Golf Channel from filming DeChambeau as he headed up the fairway:

That’s incredible! As with everything he said a few weeks ago, this makes him look so much worse than if viewers were allowed to see him walk with an angry expression on his face for a few seconds, or whatever he was doing. Instead he comes across as spoiled at best. Though the more this happens, the more it’s apparent why Bryson needs networks, rules officials, his caddie, and everyone else to look out for his brand and image: he’s not capable of doing it himself.