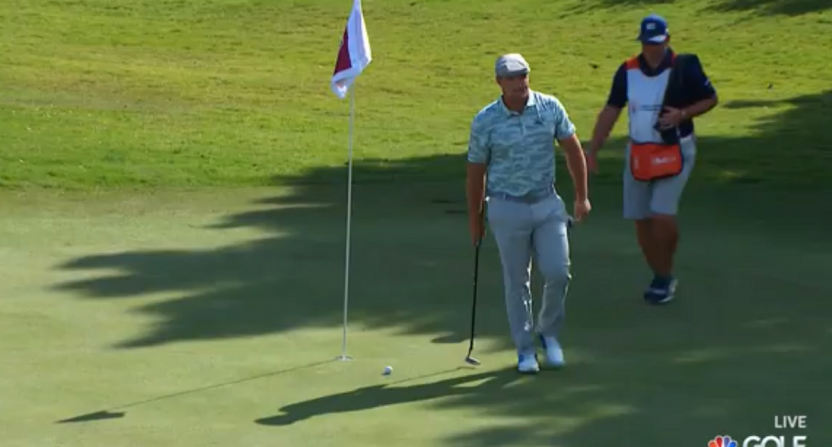 Bryson DeChambeau has provided so much content since golf came back this summer that he’s essentially the PGA Tour’s version of Entertainment 720.

After spending the layoff bulking up and changing his swing to maximize speed, Bryson has certainly made plenty of waves with his play, up to and including winning the U.S. Open at Winged Foot in September. But it’s possible that his other antics have overshadowed his success, despite a major victory. After melting down en route to a 10, for example, Bryson’s caddy rushed to prevent a camera operator from getting a shot as he headed up the next fairway.

That came directly after Bryson voiced his displeasure with being filmed displaying some anger the week prior, which led to a rant about how networks should be doing more to protect his brand, and the brands of other players. That was arguably one of the most out of touch things he’s ever said, and he’s the guy who earlier this year also said he hopes to live to 140.

(He also tried to get a free drop because he saw a couple of ants. And this is only the tip of the Bryson-sized iceberg.)

So, given all of that attention that Bryson has both sought out at every turn and recoiled against when it doesn’t suit his needs, he’s clearly under a microscope.

Today at the Shriners Hospitals for Children Open, he offered another example. In a bit of a free fall on the front nine with two bogeys and two double bogeys, Bryson missed a birdie putt and then proceeded to berate a photographer behind the green.

Bryson being Bryson. This time he asked a photographer if he’s taken enough pictures… ? pic.twitter.com/SH2yewiFAj

“Take enough pictures back there?”

If this was another player (aside from Patrick Reed), it might go unnoticed. But Bryson has pretty much guaranteed himself zero benefit of the doubt thanks to his actions over the past few months, while his on-course success.

But that’s the case for any top player; he’s currently ranked #6 in the world, after all, and he’s now a major champion, on top of all of the off-course stuff. In fact, he’s become a bit of a lightning rod for the entire sport as it grapples with how to handle Bryson’s style of play: hit it as far as humanly possible while also being relatively straight, which threatens to ruin the viability of many classic golf courses. (November’s Masters will be a huge test of this, both whether Bryson can overpower it and how quick the reactions would be from governing bodies if he does.)

DeChambeau is currently tied for 31st at the Shriners, having recovered to even par on his round for the day, but still well back of contention. We’ll have to wait and see if he’s concerned about how his brand was affected by Golf Channel showing that outburst, and how long that clip stays up before the notoriously DMCA-happy PGA Tour comms team gets it removed.