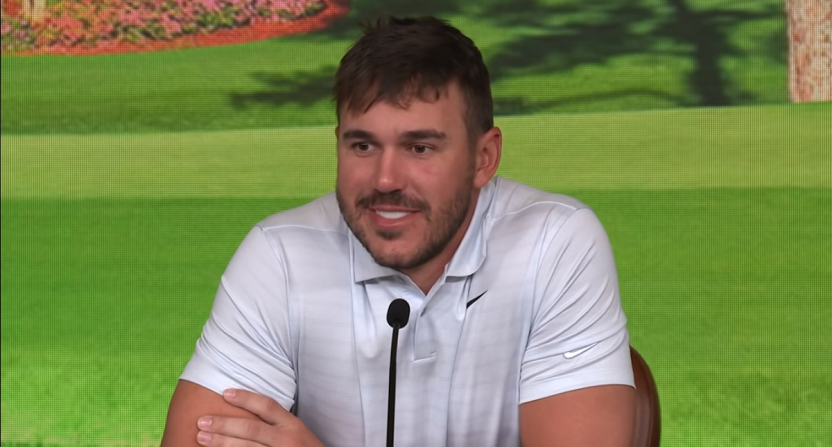 Brooks Koepka won the 2017 U.S. Open, the 2018 U.S. Open, and the 2018 PGA Championship. He missed the 2018 Masters with injury, which means Koepka has won three of the last six majors he’s played. By any reasonable measure, he should be one of the favorites heading into the Masters, where he’s made three cuts in three starts.

But Koepka’s recent form isn’t at that level; he has just two top-10 finishes this calendar year, and his last three events have featured a missed cut and a pair of T56. After the second T56 at the Players Championship, Golf Channel’s Ryan Lavner asked Koepka about his dip in form, which is when Koepka revealed he’d lost 24 pounds for an undisclosed reason, leading to some adverse effects on the course:

The weight loss has affected his distance. Koepka says he’s about 10 to 12 yards shorter off the tee. He’s dropped from ninth in strokes gained: off the tee to 46th in the category.

Koepka didn’t seem too concerned at the time:

“When you go from 212 pounds to 190, there’s not as much weight going forward through the ball,” he said. “I don’t have as much feel. I just feel out of sorts.”

Koepka says the sacrifice has been worth it, that it’s “only four months of my career.”

Yesterday, at Koepka’s Masters press conference, he responded to a question from Golfweek’s Eamon Lynch asking about a potential lingering health issue, giving us more insight into the dietary changes he’d gone through. It’s at the 17:00 mark in this video, transcript below:

You mentioned taking time off, working out and having tests done at THE PLAYERS. Is there a lingering health issue right now?

BROOKS KOEPKA: No. No lingering. It’s all quick fixes. Should be back to everything in a couple weeks. Just had a bunch of blood work and trying to figure out what was going on. Kind of‑‑ I mean, the diet I was on was probably not the best. I was like 1,800 calories a day. I mean, you’re not going to be in the best physical shape at that point. You look at somebody like Michael Phelps or somebody like that eating 6,000 or 7,000 calories by lunch time. But I wanted to do it and try to lose some weight, and maybe went about it a little too aggressively for just a long period of time and the intensity of what I was doing.

So, it seems like Koepka had planned to be back closer to full strength by now, but reading into what he’s saying, the changes he made took more of a toll than he’d expected, and he hasn’t quite rounded back into form yet. And as for the reason behind the strict dieting, Lynch offered what has been suspected and rumored for a while:

One possible reason for Koepka’s intense effort to get lean: according to reports, the famously buff golfer will appear in the buff in ESPN’s Body Issue, which will be released later this summer.

Assuming there isn’t a lingering health issue and Koepka will be back at full health at some point soon, this is just kind of amusingly silly. The Body Issue theoretically exists solely to celebrate the fitness required from athletes to compete at the top of their sports. Brooks changing his body in a way that hurt his own performance for it would seem to go against the entire purpose for doing that shoot to begin with.

Then again, it’s his career! That’s something Golf Channel’s Brandel Chamblee couldn’t understand when he went on this rant:

“For him to change his body and his body chemistry for vanity reasons is the most reckless self-sabotage that I have ever seen of an athlete that is in his prime. I get why they ask Gary Player to do that shoot. I get why they ask Greg Norman to do that shoot. But to do something that takes you out of your game, to change your game completely, it’s never worked out very well. I think he’d be at the top of everybody’s list to win at Augusta National had he not done this and had his game not [declined].”

The thing about golf as an individual sport is that players don’t really owe anyone anything. They’re not letting their team down. It is surprising Koepka would be so forthright with this, and it’s also surprising that he felt the need to slim down, considering he was widely known for being built more like a football player than a golfer. And again, it’s truly something that he’d so clearly violate the spirit of the Body Issue. But all of that is up to him.

Hopefully those photos turned out, though!