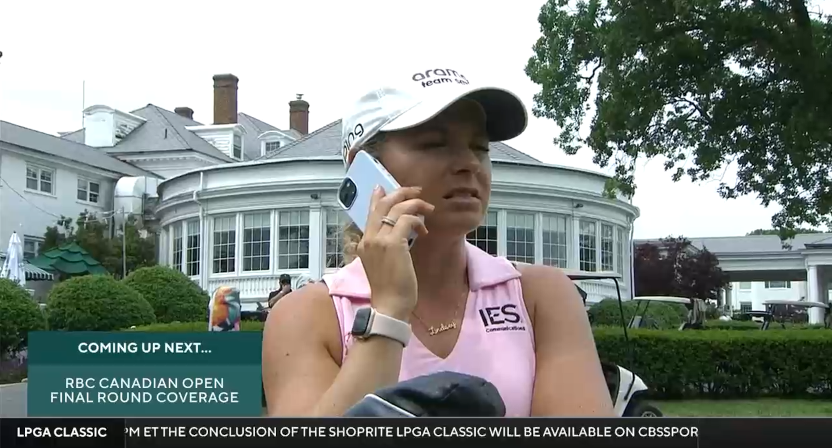 Live sports events often have uncertain endtimes thanks to weather delays or overtime periods, golf playoffs, or other extensions of play. That sometimes leads to issues, especially if the original airing network has further live sports programming coming up afterwards. There are a variety of paths taken in those cases, from getting the league /teams involved in the later event to slightly delay its start (only possible in some cases, usually with same-league doubleheaders) to continuing the first event and starting the new event on a smaller affiliated network (how ESPN often handles this with college football, for example) to bumping the first event somewhere else and going with the originally-planned coverage of the second event. CBS took that last path Sunday, and thanks to a strange alignment of international broadcasting rights, that meant that most Canadians weren’t able to watch famed 24-year-old Canadian golfer Brooke Henderson pick up her 11th LPGA Tour win (the most major tour wins of any Canadian professional golfer, man or woman).

On Sunday, the broadcast CBS network was supposed to air two hours of final-round coverage of the ShopRite LPGA Classic from 1 to 3 p.m. Eastern, picking up after Golf Channel’s morning coverage. But a weather delay at the tournament site (the Stockton Seaview Hotel and Golf Club – Bay Course in Galloway, NJ) had that tournament running later than expected, and it eventually wound up in a playoff between Henderson and Lindsey Weaver-Wright. But that playoff wasn’t shown on CBS, as they sent that coverage to CNBC and CBSSports.com so they could begin their coverage of the final round of the PGA Tour’s RBC Canadian Open as scheduled at 3 p.m. Eastern. Here’s how that exit from LPGA coverage on CBS looked:

And here’s how it picked up on CNBC:

Here’s how CNBC started their coverage of the finish to that LPGA Tour event. pic.twitter.com/VW66PA4IqE

The landing destination here is a bit unusual, as CNBC is owned by NBCUniversal rather than CBS parent Paramount Global. However, this tournament’s coverage originated with NBCUniversal-owned Golf Channel, with the Sunday coverage just sublicensed to CBS, so there may have been a prearranged deal that any final-round overrun coverage would head to CNBC. And while CBS’ own cable sports channel, CBS Sports Network, presumably could have been preempted here (they were showing a Professional Women’s Bowling Association tournament from last week), CNBC is actually much more accessible for American viewers  than either Golf Channel (which was covering a Champions Tour event) or CBSSN.

We haven’t seen a recent Nielsen coverage estimate for CNBC, but when we covered it in 2018 (when NBCU decided to send two Stanley Cup playoff games to Golf Channel so CNBC could show Shark Tank reruns and Staten Island Hustle instead), they had 87 million U.S. households, 16 million more than Golf Channel and likely many more ahead of the not-rated (then) CBS Sports Network. Golf Channel was at 65.5 million households this January, a number probably still between CNBC and CBSSN. So most Americans with cable or satellite subscriptions who were looking to watch the conclusion of this LPGA event likely could do so, providing that they knew it was on CNBC. To that end, it’s interesting that the two-minute opening to the CBS broadcast of the RBC Canadian Open did not include an on-air mention of that. (There were reportedly some graphic banners pointing LPGA viewers to CNBC and CBSSports.com, but they’re not in this clip, from New Orleans CBS affiliate WWL.)

And here’s how CBS started their coverage of the PGA Tour’s RBC Canadian Open: pic.twitter.com/KhxugfeZgI

It’s also at least somewhat unusual to see a network bail on a playoff to get to the early part of a final round at another event. The stakes were much higher in the LPGA event than they were at the time CBS went to the PGA Tour event. And this does add to the generalized lack of priority given to women’s sports on U.S. TV and beyond, and to the times this has previously happened in women’s golf (including the much-less-defensible NBC move to dump a U.S. Women’s Open playoff last year in favor of gymnastics). However, there is the context of the PGA Tour event being the actual thing that CBS has rights to, and the one where they have their lead golf crew of Jim Nantz, Nick Faldo, and more. The LPGA Tour event was sublicensed rights, so there’s at least an argument for them prioritizing their own event, even with a playoff ahead in the LPGA event.

It may also be worth noting that relatively early in CBS’ PGA Tour coverage, they featured PGA Tour commissioner Jay Monahan’s first interview since the first LIV Golf event and his sanctioning of PGA Tour players who participated. That’s certainly something they were eager to get to. And there’s an argument that most of the Americans who wanted to watch the LPGA Tour event finish were able to do so on CNBC. This does still hurt for Americans who have CBS and not CNBC, but some broadcast-only Americans were undoubtedly looking to catch the PGA Tour event as well.

The real injustice here was for Canadians looking to see Henderson’s playoff, though. There are a lot of little nuances in terms of what’s available on TV in Canada, and they added up in a particularly unfortunate way here. Most Canadians with multichannel video provider setups (cable, satellite, or digital MVPD) have access to local CBS affiliates from just across the border, as do some with antennas.

A smaller fraction of those with MVPD setups have access to Golf Channel, which is available in Canada, but usually on a sports tier. But few of them have access to CNBC, which is generally not available in Canada (it’s on some VPNs, and it is carried varius tiers on some providers, but even that is often replaced with a “CNBC World” feed around U.S. CNBC showings of live sports, and some noted that that replacement happened Sunday.) And while some LPGA events are carried on Canadian sports network TSN’s various channels, this one was not. (The PGA Tour RBC Canadian Open, however, is, in addition to its availability on CBS.) So some Canadians were understandably not thrilled at how this turned out:

Even though we couldn't watch it in Canada, Brooke Henderson wins the playoff!! ??? https://t.co/HzshvN6Vxq

So Brooke Henderson is in a playoff and it's see ya later from CBS. Thanks for nothing.

If it happened in reverse, would the results be the same? ?‍♂️ https://t.co/X03YNhcaJK

It would have been nice to watch the playoff of the Shoprite but I guess not #lpga. ??

Too bad we did not get a chance to see this Canadians victory in Canada! That's just wrong! But congrats!

Of course, CBS is not making its decisions with Canadians in mind. Cross-border viewers don’t even tend to count for American stations’ ratings (which has been a fascinating part of the long-running Super Bowl simsub debate). And this particular situation could have been avoided if TSN had picked up this particular LPGA event in advance for at least one of its networks; they have five, which are regional feeds first and foremost, but which are all accessible in many sports packages and which give them overrun flexibility. And if this event had gone according to plan, Canadians would have been able to see it finish in full on CBS. But the way it ended led to some slight inconvenience to American viewers who have CNBC, to more inconvenience for Americans who have CBS but not CNBC, and to incredible inconvenience for Canadians.