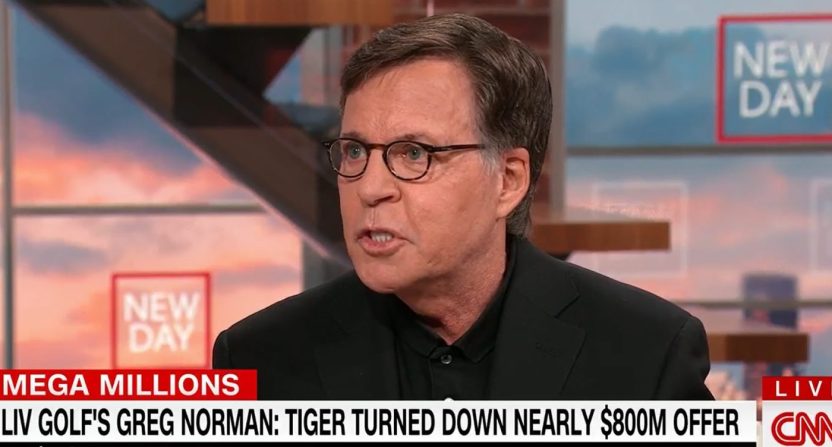 LIV Golf CEO Greg Norman confirmed to Tucker Carlson that Tiger Woods was offered upwards of $800 million to ditch the PGA Tour. According to Bob Costas, the offer is further evidence of Saudi Arabia’s sportswashing efforts.

Costas joined CNN’s New Day Tuesday morning, where the iconic sportscaster reacted to Norman’s recent interview with Carlson on Fox News which was highlighted by confirmation of the massive attempt at luring Woods to LIV Golf.

Financed by Saudi Arabia’s Public Investment Fund, LIV Golf has been under fire for partnering with a government known for its deplorable human rights violations. And while LIV Golf supporters have cited the PGA Tour’s indirect links to Saudi Arabia through its own various business partners, Costas explained why there’s a major difference.

“No matter what the other involvements may be by various business entities in the United States including those involved with the PGA Tour and are now invested in one way or another in Saudi Arabia, those people are not positioned as ambassadors for the Saudi regime,” Costas said of business links to Saudi Arabia outside of LIV.

“Why would you pay Tiger Woods this amount of money?” Costas continued regarding LIV’s $800 million offer. “Because he would be in effect, an ambassador for the Saudi royal family and for those invested in this. Whether it’s presented that way or not, that’s the whole idea of sportswashing. Let’s take some popular and recognizable figures, associate with them and cleanse our image.”

Golfers and broadcasters who made, or even sought to make the jump to LIV Golf, have been accused of being tools to help Saudi Arabia sportswash its image. LIV isn’t paying people hundreds of millions of dollars just for golf, they’re paying popular, public personalities to essentially be used as ambassadors for the Saudi government, regardless of intent from Phil Mickelson, Dustin Johnson, or anyone else who took the money.

“You have a lot of these golfers saying now, ‘this is all about growing the game of golf’ and ‘golf is a force for good’ or ‘we have problems with the PGA Tour,’” Costas continued of those who made the jump to LIV. “All of that is fine, if it was underwritten by almost any other entity. The objection here is not within golf, it’s the idea of the Saudi royal family.”

Tiger Woods is one person who refused to help Saudi Arabia’s efforts of sportswashing its image through LIV Golf. In doing so, Woods has given his own image a boost, despite some of his flaws on and off the course.