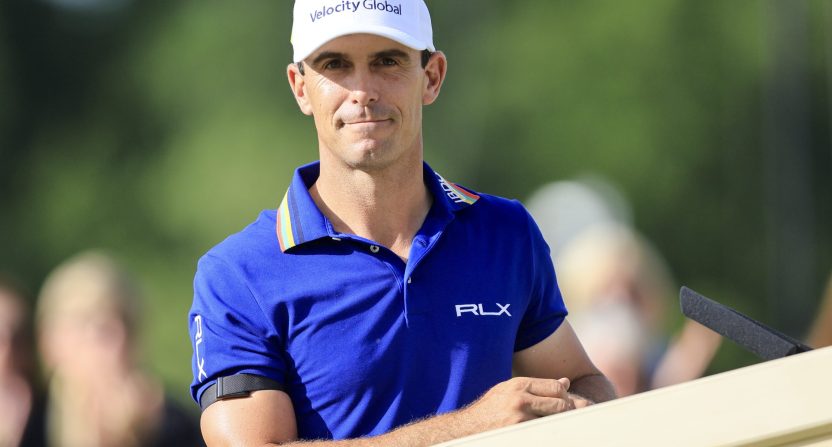 Billy Horschel has been a good soldier for the PGA Tour for a long time, but that service has never been more necessary than during recent months.

With the Tour under siege from LIV Golf, the Saudi-backed sportswashing venture that just held its second event (and first in the United States), voices like Horschel’s are even more important. Sure, players like Rory McIlroy, Jon Rahm, and Jordan Spieth carry more weight, but Horschel exists in the class of player that LIV has so far more easily pried away.

He’s currently ranked #15 in the world, but Horschel has never won a major. He’s also 35, which puts him nearer the back half of a career in a sport that’s only getting younger as distance and athleticism become rewarded more than experience and creativity thanks to rampant and unchecked equipment changes that make it easier than ever to swing impossibly hard without losing accuracy.

That said, Horschel has been nothing but anti-LIV, and today he took to the podium with commentary that was refreshingly candid. Focusing not on canned talking points about the benefits of the PGA Tour, Horschel instead took on defectors like Brooks Koepka and Pat Perez who have tried to obfuscate the reality of the situation to defend their decisions to jump ship.

?️ "There's a lot of guys that are hypocrites, that aren't telling the truth, that are lying about some things that I can't stand to just sit here and be diplomatic about it"

Horschel’s words there are surprisingly biting for a sport that for too long pretended it was some sort of conflict-free zone. It’s impossibly nice to hear a player on the inside describing the situation that openly, because the truth is that LIV players citing “more time with their families” as some sort of escape hatch to avoid tougher questions (or to avoid just saying they took Saudi money because they wanted to take Saudi money, which is the truth but a tougher thing to say while maintaining their personal stature.)

Those players aren’t going to have more freedom to play less. They’ll probably be playing more as soon as next year, when LIV increases their schedule.

But the accuracy of Horschel’s LIV commentary aside, these last few months have also highlighted the utility of a media-player element that for too long has been rote: the press conference. They play a role in all sports, for sure, but often it’s fairly laid-back and sleepy. That golf, of all sports, has suddenly become must-watch for pressers alone is fascinating.

From the LIV press conferences that saw Phil Mickelson looking like an idiot and other players trotting out various talking points Horschel skewered, to the PGA Tour versions that have seen actual relevant news revealed, this entire saga has been a fantastic argument for the value of this interaction format.  In the social media age, many have decried the standard presser as outdated; why say anything interesting when you can share it on your own platform of choice instead? But watch that video.

Being able to get a message out this way, with actual video and emotion behind the words to a variety of outlets all at once, is still very valuable for everyone involved. The athlete gets an uncut platform, the media get material and the ability to participate in the discussion, and fans and viewers get the finished output without having to follow players on Instagram.

Certainly there will still be boring ones across sport, but this has been an excellent reminder that they still have utility in the right context.