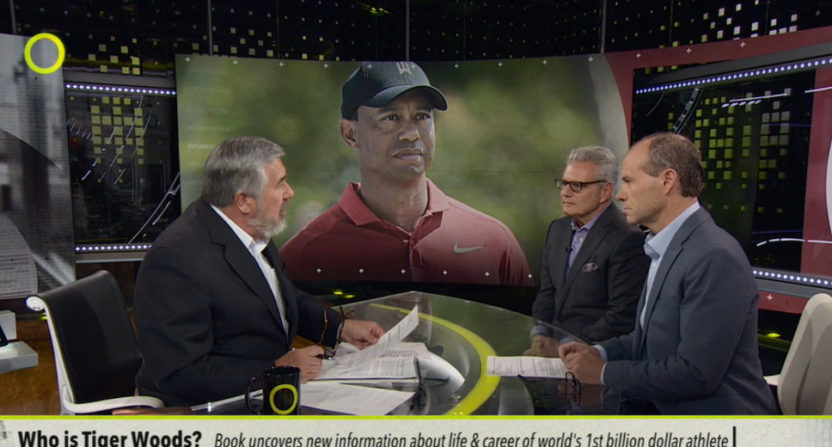 Tuesday saw the release of a new biography titled simply Tiger Woods, by authors Jeff Benedict (who’s written 15 books, plus pieces for the New York Times and Sports Illustrated) and Armen Keteyian (known for a long TV journalism career at ABC, CBS, and HBO), and it’s already creating a stir. Woods’ lawyers have called it “full of egregious errors,” and former Bill Clinton aide and counselor Doug Band has blasted its particular account of a Woods-Clinton round of golf (which he was present at), saying “there is hardly an accurate or true word in the excerpt.”

On Wednesday, Keteyian and Benedict (seen at center and right above, respectively) appeared on ESPN’s Outside The Lines to talk to Bob Ley about the book and about some of the criticisms it’s seen:

In particular, Benedict strikes back at Woods’ lawyers’ criticism of the book as a “rehash of other books” (specifically Woods’ own The 1997 Masters: My Story, which came out last year), saying that they tried to interview Woods but were rebuffed, so “the next best thing for us is to look what Tiger has said, and the best place for that is his own book.” Keteyian then brings up his own background as a fact-checker, says the “egregious errors” the lawyers reference are minor compared to the scale of the book, and says Woods’ lawyers tried to impose conditions for an interview “that no legitimate journalist would accept.”

Keteyian then fires back at Band, saying “I called him to fact-check the information that’s in that section,” and reveals that Band is the source for the quote of “I’m Tiger Woods, king of the world, go eff yourself,” plus says he had another source in that fivesome who described that round. Benedict then talks about how there is new and fresh material in this book, like stories of Woods being comfortable with kids who didn’t know he was famous and one of his neighbors talking about him asking who he can trust, and Keteyian talks about the book illustrating “the cost and the price of fame.”

The debate over Keteyian and Benedict’s book is likely to stay hot for a while, as news broke Tuesday that acclaimed filmmaker Alex Gibney is developing a documentary series based on Tiger Woods. Gibney has been directing impressive documentaries for decades, including Enron: The Smartest Guys in the Room, Gonzo: The Life and Work of Dr. Hunter S. Thompson, Going Clear: Scientology and the Prison of Belief, and Steve Jobs: The Man in the Machine, so he’s covered plenty of hard-to-profile figures and companies. He also won an Oscar for best documentary feature in 2008 for Taxi to the Dark Side (about a taxi driver in Afghanistan beaten to death by U.S. soldiers) and was nominated for that award again in 2011 for Client 9: The Rise and Fall of Eliot Spitzer.

While it seems unlikely Woods would participate in a series based on a book his representatives have bashed so heavily, Gibney has experience covering sports subjects with limited or no participation from the central figure. That includes the 30 for 30 (well, “ESPN Films Presents,” but retroactively dubbed a 30 for 30) installment Catching Hell (on Steve Bartman, who declined to be interviewed) and 2013’s The Armstrong Lie (which did get Lance Armstrong to participate, but with some difficulty). If anyone’s going to do a Woods documentary without the central subject’s participation, Gibney is a good choice.

So far, Gibney’s project has only been announced by his Jigsaw Productions company, and it doesn’t yet have a distributor. However, it seems likely that there will be significant interest in this, considering that the book is already an Amazon best-seller (with a five-star average rating so far, no less), that there’s a huge amount of interest in Woods (just look at the ratings from his recent run of contention), and that Gibney is widely regarded as one of the top documentarians out there. We’ll see how it goes and where it lands, but this is definitely one to keep an eye on. And judging by their response so far, Woods’ camp may not be thrilled about that.