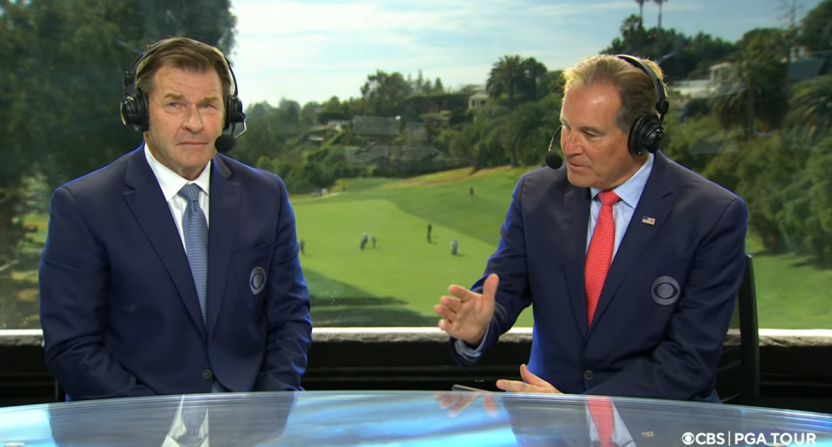 Nick Faldo retired from full-time golf analysis this weekend, with his final broadcast on Sunday.

It was a justifiably emotional scene, as Jim Nantz and others bid farewell to the English legend. It was a legitimately touching, emotional moment of sports television, with Nantz, Frank Nobilo, and Ian Baker-Finch (who himself had a controversial weekend) there when Faldo signed off. Faldo teared up to the point of only being able to get out one impossibly poignant line.

The end of an era.@NickFaldo006 signs off for the final time. pic.twitter.com/nXm8mRMPnz

Faldo’s on-course pedigree isn’t in question; winner of six major tournaments, he always had the sort of playing resume that adds gravitas to a broadcast. That’s in large part what made his decades of sleepy, lackluster work so disappointing.

There were certainly moments of unintentional entertainment, of course. Earlier in 2022, Nantz attempted to throw it to Faldo for comment and was met with dead air as Faldo struggled to choke down some pistachios. Memorably, Faldo tried and failed multiple times to pronounce “Colin Morikawa”, who is and was one of the game’s top players.

Nantz is all of us here pic.twitter.com/lNDdPCLJ1t

There was also the time Phil Mickelson dropped by the booth in 2020 for what seemed like an audition (how things have changed since), a moment that saw Faldo flailing around in an effort to keep up.

Phil Mickelson dropping in for some analysis this afternoon; Nick Faldo wasn't quite ready for his opening dad joke pic.twitter.com/tNycbpWCeL

Having watched golf broadcasts for decades, Faldo has never managed to make much of a favorable impression on me. It’s often been the opposite; I wrote an entire running diary in 2016 that featured plenty of shots at his style of analysis, especially moments when he was intentionally withholding from the viewer.

Finally someone mentions 62, as Phil heads to the tee box, handing his ball to a kid. Terry Gannon brings it up, mentioning that Phil needs two birdies on the final two holes. Then Gannon mentions that Faldo has one of those rounds of 63. Faldo’s analysis:

Let’s remember that Nick Faldo’s only job at this point is to present insight to the viewer. He’s been chasing the exact same thing Mickelson is currently chasing. He’s played Troon multiple times under Open conditions. And because he’s concerned about someone breaking his record, one so prestigious that he shares it with 24 other guys, he’s keeping quiet. Thanks as always, Nick.

All that is to say: I’m not a huge fan of his work. We don’t need to shift into hagiography for every single broadcaster who retires simply due to longevity. Faldo’s style wasn’t to my taste; he often seemed to coast, not really bringing any specific insight that was relevant to a moment. Having said all that: I’m going to miss him anyway.

It’s not the same as when Johnny Miller retired. I actively disliked Johnny for years until I realized just how vital his form of truth-telling was for a sport too bereft of it. Miller was more negative than I preferred, but once I adjusted for that inherent perspective, it became very, very easy to appreciate what he brought to a broadcast.

I’ve never gotten there with Faldo, though, and he’s been omnipresent for years thanks to his work with both CBS and the Golf Channel; there’s rarely a big event in men’s golf that doesn’t feature Faldo on the call for part of the week. All four majors, the Ryder Cup, and more. He was always there, bringing his signature brand of Faldo to things.

At this point of this piece, it might be fair to wonder what’s lamentable about Faldo’s retirement to Montana. It’s actually simple: who else is there?

CBS is elevating Trevor Immelman, who has never made much of an impact. Paul Azinger has the top analyst spot at NBC, where he spouts random pseudo-folksy catchphrases (free drinking game, at your own risk of imminent alcohol poisoning: Azinger mentioning “pressure.”) ESPN’s broadcasts fare better, but they don’t have any final weekend rounds. Those alternatives aren’t appealing. Faldo, at least, brought certain things to the table from a consistency standpoint. (And the value of unintentional comedy isn’t nothing.)

Plus Sir Nick had actually grown more biting in recent months. His lengthy takedown of Brooks Koepka’s LIV-related hypocrisy was vital television, some of the most riveting insight Faldo has brought to the table in years.

Clearly it’s a backhanded compliment to suggest that Faldo will be missed because there’s a dearth of better options in the wings, but here we are. Mickelson was long-tipped as a possible top analyst, but his LIV travails and general exile means that’s not going to happen. Tiger Woods has zero need or interest in this kind of role.

That said, looking around at the golf landscape, there’s just really no one left who has demonstrated an ability to be better than Faldo in this role. It’s an indictment of the situation, of course, but it’s also still worth noting. For all his faults and lack of a high ceiling, he still managed to bring a floor to the table that’s higher than anyone else regularly in that role on golf broadcasts. Let’s hope someone emerges soon, but until then, I’m actually, somehow, against impossible odds, going to miss Nick Faldo.