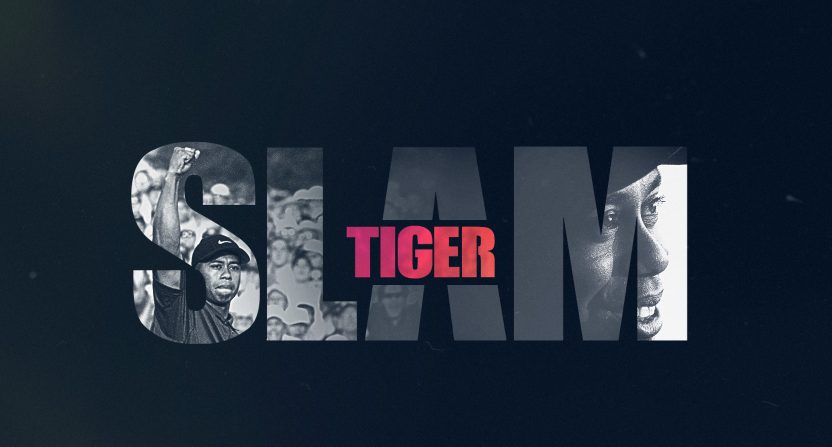 It’s been nearly two decades since Tiger Woods kicked off an unprecedented (and since unmatched) run of major championship dominance at Pebble Beach.

Tiger Slam features interviews with caddie Steve Williams, journalists and broadcasters who called the action including Jim Nantz, Dan Hicks, Mike Tirico, and Scott Van Pelt, as well as Bob May, the journeyman who took Tiger to the limit at the 2000 PGA Championship. It’s not The Last Dance; just one hour, and without Woods involved, it relies on archival video for Tiger’s thoughts on the moments covered.

It’s almost stronger for it; Woods never gives much beyond the basics anyway, and letting a parade of familiar faces frame Tiger’s feats makes it feel even more impressive. Sixty minutes isn’t enough for any revelatory details, but the accomplishments are still all worth revisiting, and hearing some insight from Steve Williams on various big moments is fascinating color. (Williams, as ever, isn’t shy about noting his own role in Tiger’s run.) We also get a classic Johnny Miller moment, when he said on-air partway through round 1 at Pebble that Tiger was going to blow out the rest of the field and win.

The best anecdotes come from the tournament with the most drama of the four, as you’d expect. Tiger’s 2000 PGA Championship victory came in a playoff over Bob May, who comes across very well here. May never had the pro career expected after a fantastic junior career in California, which Tiger Slam explores in welcome detail. Hearing Williams recount that Woods, on the range, said May wasn’t likely to wilt under the pressure is fascinating.

May played brilliant golf for most of that week, and for most of Sunday, but it wasn’t enough. Nothing was enough during that run, of course, because Tiger was playing golf we haven’t really seen before or sense, relative to the rest of the field. It’s fun to look back twenty years, to a time when Tiger was establishing himself as a superstar; he’d won the 1997 Masters, yes, but had won just the 1999 PGA before his run of four majors in a row.

It’s hard to imagine golf without Tiger Woods, and this is a solid look back at why that is.

[Tiger Slam airs at 8 PM Easter on Golf Channel, after the conclusion of The Match. Image/clip courtesy Golf Channel]