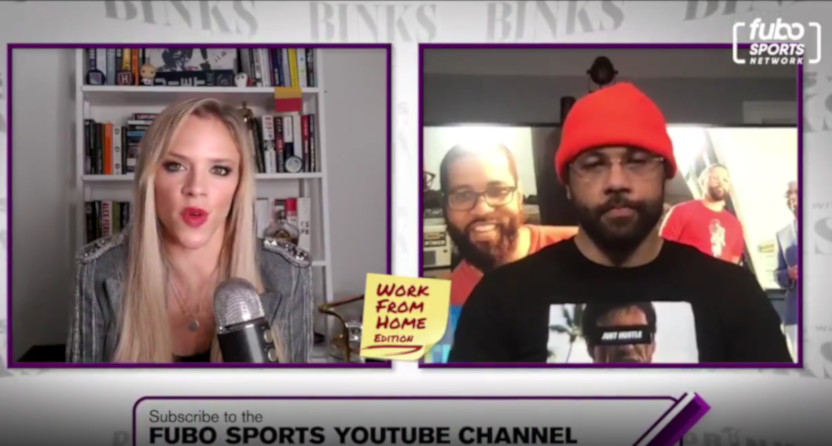 While much was made of Jemele Hill’s comments on politics, race and sports during her time at ESPN, there was less public discussion about her SC6 co-anchor Michael Smith. But Smith was right there with Hill in bringing in-depth conversations about race, sports and culture to SC6, and her eventual departures for ESPN’s The Undefeated (in January 2018) and then The Atlantic (in October 2018) led to changes for him too. Smith hosted SC6 solo during Hill’s fall 2017 suspension, then was taken off the 6 p.m. SportsCenter in March 2018 (after discussions of how ESPN had “muted” him and Hill in their final months together). He then left ESPN in October 2019 , joined The(Co)Laboratory and recently launched a Peacock sports talk show with Michael Holley. And in conversation with fubo Sports Network’s Julie Stewart-Binks this week (seen above; the full episode can be seen on Drinks With Binks Friday at fubosportsnetwork.com), Smith expressed some frustration at seeing how the race-and-sports conversations that drew criticism and condemnation for him and Hill in 2017 and 2018 are now so common on varied sports media shows:

I asked @michaelsmith how he feels about @espn now having conversations of racism & sports, something him & @jemelehill were vilified for: “If black lives matter now, they didn’t matter then? …having those conversations literally compromised my career…but it’s ‘cool’ now." pic.twitter.com/3nCY7J2bt9

“It’s not like it’s a different subject matter… it’s not like there’s been some discovery… this is literally the same subject…It had me questioning everybody, not just ESPN but all of America… oh it’s trendy now.” @michaelsmith pic.twitter.com/zNnriVmVgS

Some selected highlights from Smith’s comments in those clips, starting around 0:35 in the first clip:

“At first it was frustrating. At first, you know, there was a lot of anger about that. Because I’m like ‘Wait a second, I’m old enough to remember 2018. If Black Lives Matter now, they didn’t matter then? And I’m watching, and it’s nothing against the people doing it, but I’m watching friends of mine, I’m watching people who I respect, and I’m watching them have unfiltered, unlimited, unedited conversations on the same platforms. Whether it’s SportsCenter or The Jump or NFL Live, everyone’s having that conversation. And I’m like ‘Oh, word? Oh, wow.’ It’s just cool now, period.”

“I was angry, I was frustrated, I was resentful. Because I just felt like ‘Wow.’ And it wasn’t just because of what I had gone through in the name of carrying on those conversations on SportsCenter, it was ‘What’s changed? Why is this different?’ Unarmed Black people getting killed on camera, that’s what we were talking about. It’s not like it’s a different subject matter. It’s not like there’s a different take on the matter. It’s not like there’s some discovery that let us feel ‘Oh, this is different.’ This is literally the same subject. He was just killed in a different manner. So I’m like ‘Oh, so now it’s cool, and less than two years ago it wasn’t, and I’m a living example of that?'”

“And the downside of not saying ‘Black Lives Matter’ and supporting Black Lives Matter is now greater than the downside of distancing yourself from that very basic idea. And so, there was a lot of resentment at first, just given what I’d been through. But over time, I realized, ‘Yeah, I’m entitled to my feelings, but I try not to make it about me,’ and the most important thing is ‘Okay, look, better late than never.’ And here we are having these conversations. And more important, others who came behind me are now getting an opportunity to speak their truth. And so be it. I’ve moved on, I’m in a better place than I would have ever been at ESPN, quite frankly. And maybe it just took them a while, but here we are.”

Smith deserves a lot of credit here for being open to talk about his feelings about seeing those conversations take off in so many mainstream media outlets after the criticism he and Hill took for featuring some of those conversations. And ultimately, this seems like a pretty solid response from him. He’s been critical of ESPN’s handling of him and Hill before (including in an October 2019 interview with Stewart-Binks), but this interview illustrates both why he’s been upset and also how he’s moving on to his current projects. And it’s also a good reflection of how the wider discourse on race and sports has changed in the past few years. It’s understandable that Smith is a little upset that some of what was once seen as so taboo for him and Hill is now mainstream discussion, but he also shows a good acceptance of the current situation, and happiness about where he is now. But this whole interview is worth a watch as a very frank discussion about how the dialogue on race and sports has gone over the past few years.

1 thought on “Michael Smith on race and sports discussions: “Having those conversations literally compromised my career, but it’s cool now?””