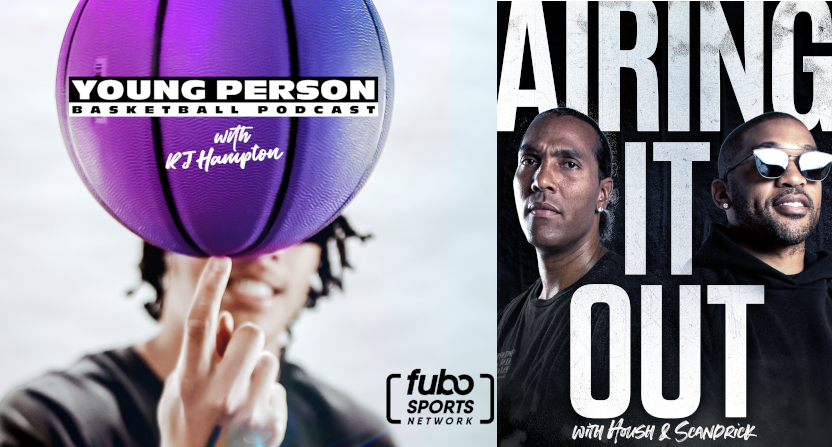 There are two new shows coming to Fubo Sports Network this fall, in addition to a pair of returning shows. The free ad-supported network run by streaming TV provider FuboTV has been around since 2019, and two of the shows it has this fall will be familiar to viewers, No Chill With Gilbert Arenas (hosted by former NBA star Arenas and Josiah Johnson) and Getcha Popcorn Ready with T.O. and Hatch (hosted by former NFL star Terrell Owens and Matthew Hachette). But they’re also debuting two new shows, Airing It Out with Housh and Scandrick (hosted by former NFL veterans T.J. Houshmandzadeh and Orlando Scandrick, previously seen working together on the About The Game podcast) and The Young Person Basketball Podcast with R.J. Hampton (hosted by current Orlando Magic guard R.J. Hampton). Here’s more on what to expect from the new shows from a release:

Continuing its mission to bring the voice of the athlete to fans, Fubo Sports Network has greenlit Airing It Out with Housh and Scandrick, a football-focused talk show hosted by former Pro Bowl wide receiver T.J. TJ and 12-year NFL vet Orlando Scandrick. The new series will kick off with a preview episode on September 6 at 7 p.m. ET/PT followed by the official series premiere on September 12 at noon ET / 9 a.m. PT. For the first time ever, Fubo Sports Network will stream episodes live on its YouTube channel every Monday, prior to airing them on Fubo Sports Network’s linear channel each Tuesday at 7 p.m. ET/PT.

Just in time for the start of the 2022-23 NBA season this October, Fubo Sports Network will premiere the anticipated new series from Orlando Magic point guard R.J. Hampton. Starting October 23 at 8 p.m. ET/PT, The Young Person Basketball Podcast with R.J. Hampton will give fans an inside look at what it’s like to be a pro baller. Guests will include teammates Cole Anthony and number one overall pick in the NBA draft Paolo Banchero, plus former NBA champion turned successful sports agent Mike Miller.

…“Our roster of Fubo Sports Network originals continues to grow as we bring the voice of the athlete to audiences wherever they consume content,” said Pamela Duckworth, head of Fubo Sports Network and original programming, FuboTV. “As the line blurs between athletes in the game and behind the mic, we’re building a space for sports stars turned content creators to share their first-hand experiences and insights with our audience of enthusiastic fans. I am grateful to have R.J., Housh and Orlando join us.”

It’s interesting to see Fubo Sports Network expanding on its strategy around shows hosted by former athletes. They’ve found some success there with No Chill and Getcha Popcorn Ready, and now they’ll be running something else along those lines with Airing It Out. That one’s interesting as well for Houshmandzadeh and Scandrick’s past work podcasting together, which should help this have some chemistry right off the bat. And it’s intriguing to see that go with the model of a YouTube release Mondays ahead of a linear release Tuesdays.

It’s also notable to see a show from a current player like Hampton, maybe especially in the NBA. There’s been a rise of podcasts from active NBA players lately, and some, particularly Draymond Green, have been outspoken about their “new media” goals and about directly taking on old media. But other podcasts from active players haven’t been as confrontational, so we’ll see which approach Hampton adopts there.

Hampton’s also an interesting figure to host this. He’s only 21, and has only played two NBA seasons so far (he was the 24th overall pick in the 2020 NBA draft); the Young Person Basketball Podcast name is very apt. So he’ll likely bring a different perspective than some of the long-time NBA veterans do on their own podcasts. And he has an unusual path to the league as well, as he chose to play professionally in New Zealand after high school rather than head to college. It will be worth keeping an eye on what he has to say on this new show.