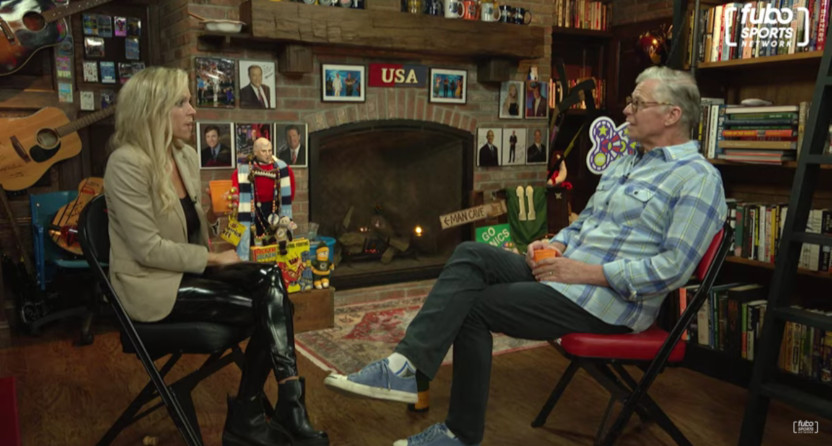 An induction into any sort of Hall of Fame is usually a positive experience for the inductee, but it brought up some more negative feelings for sportscaster Dan Patrick. On the season four premiere of fubo Sports Network interview show Drinks With Binks (airing this Saturday), Patrick (seen at right above) told host Julie Stewart-Binks (seen at left above) his 2020 induction into the National Sports Media Association Hall of Fame wasn’t something he viewed positively at first:

Patrick says “I was inducted into the Sportscasting Hall of Fame, and I was actually mad. Because it meant, like, ‘I’m near the end,’ and I didn’t like that. I have to be the only disgruntled Hall of Fame member ever, because when I got the call, it was like ‘Oh, I won Sportscaster of the Year?’ And Dave Goren, the head of the organization, said ‘Hey, you’re going into the Hall of Fame.’ And my first reaction was ‘[Bleep]’. I didn’t want to open up my scrapbook.”

He then continues “But, we couldn’t hold the ceremony [due to the pandemic], and I guess it’s going to be maybe later on this year, I don’t know. And the Radio Hall of Fame as well, I never even gave thought to it. …It’s not finite to me, but there’s just that feeling of ‘God, you’re really old’ when you get into the Hall of Fame. And it kind of bothered me. Because I don’t want to be viewed as…I don’t act my age, I don’t want to act my age, and it’s a young man’s game, I get that. But there was a little bit of ‘Hall of Fame, ugh.’ Because you have to look back, and I don’t want to look back.”

Stewart-Binks then asks Patrick what he wants to do in the time ahead, and he says “Well, I’m going to do this for a few more years. I’m still challenged every day. I love doing it every day. Bob Costas said ‘I don’t know how you do it every day,’ and I said ‘I don’t know how you don’t do it every day.’ I love the grind. People go to a golf course to hit golf balls, play golf, I go to grind, I go to hit golf balls. I love the grind, every single day. Interviewing people, I’m still challenged by it.”

Those are certainly interesting comments from Patrick, and he makes a good point. With athletes and halls of fame, those selections are usually done after they’re retired. Even for coaches and “builders,” the call is usually made once they’re out of the game, which has sometimes led to some awkwardness when a Hall of Fame inductee later returns.

But, at the same time, it maybe makes more sense for early inductions in a sports journalism Hall of Fame, as many prominent sports journalists continue doing at least something in that field until very late in their lives. And maybe there should be an understanding that a sports journalism Hall of Fame is a little different than one for players and coaches, and that an induction doesn’t necessarily mean an inductee is done. (In fact, many of the NSMA Hall of Fame inductees in particular are still active in some way.) With that said, though, it makes sense for Patrick to have some of these conflicted feelings about a Hall of Fame announcement. And it’s certainly notable to see him reveal that thinking to Stewart-Binks; it’s an interesting look at what’s going on with him, and how he’s approaching this particular part of his long and distinguished sports media career.

The full episode of Stewart-Binks’ interview with Patrick will premiere on fubo Sports Network (on connected TVs and TV apps, including fuboTV, Plex and The Roku Channel, and at fubosportsnetwork.com) Saturday, Sept. 18 at 5 p.m. ET/PT. Drinks with Binks will then air another episode that day at 5:30 p.m. ET/PT, and will have more episodes in the weeks ahead.