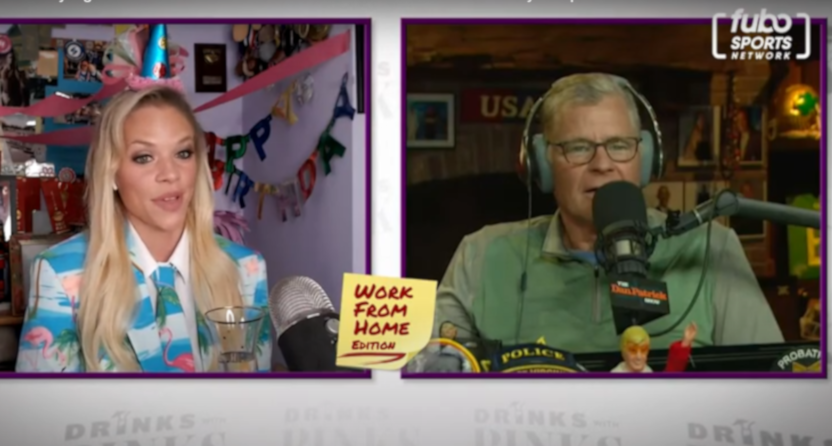 There’s always been an interesting relationship between Dan Patrick and ESPN’s SportsCenter. Patrick’s work with Keith Olbermann on “The Big Show” era of SportsCenter (a nickname that ESPN management reportedly despised) is a large part of what’s led to his Hall of Fame prominence today, from radio/TV host through Olympics and NFL work through academic work through podcast network launches. But his reunions at ESPN haven’t always been easy; they’ve come with visitor badges and lots of disclaimers. And that makes Patrick’s Friday appearance on fubo Sports Network’s Drinks With Binks particularly interesting, as he both told host Julie Stewart-Binks that he was willing to do a 2022 reunion with Olbermann (something Olbermann had already tweeted), but also added some notable context about the challenges of his SportsCenter work:

That second clip is particularly notable for Patrick’s comments on how challenging his time on SportsCenter was. Here are some of those remarks:

“I loved it, but it took years of my life. …I’m too old to be doing that, it’s a young man’s game. SportsCenter, that is a high-wire act every night, and I did that for 15 years. Because it’s live; the games would end, and we would go on the air, and we wouldn’t even see the highlights 70 percent of the time. So they would hand us, I’d be going on camera saying ‘Hey, it’s the Cleveland Indians facing the Milwaukee Brewers, and blah blah blah blah blah, I would reach my hand out while I”m on camera up to here (showing a line just below his neck), and I’d get the shot sheet, and I’d say ‘Here are the highlights’ and look down, knowing that that would be the first time that I would know what those highlights were. And you would have to trust a 23-year-old, just graduated, to get the right name and spelling. And it was fun, but…”

Stewart-Binks then asks Patrick about pronunciation challenges, and he discusses how hockey made that particularly hard. “Hockey would have these late-season call-ups, Nikolai Khabibulin, and I had it ‘Nikolai Khab-ib-ulin.'” And he goes on from there to talk about how the many talented anchors at ESPN meant he had to always be at his best. “It was really competitive, but it made you better. I had [Rich] Eisen and Stuart Scott, Chris Myers, Mike Tirico, Chris Fowler was doing SportsCenter, [Chris] Berman was doing SportsCenter, Olbermann, Bob Ley, Robin Roberts, there was a lot of talent in that building, and it was very, very competitive.”

The rest of that clip has some notable spots too, including Patrick’s praise for Rece Davis and Tony Reali. But these discussions are particularly notable for Patrick both confirming that he’s ready to appear with Olbermann again (and as he notes, if boxers can unretire, why not sports anchors?) while also talking about the challenges of SportsCenter. And his comments there are quite interesting; yes, absolutely, that’s a show that so many people have wanted to do, but that doesn’t mean that doing it is easy. These are good clips, and it’s cool to see Patrick open up this way.

Drinks with Binks airs on fubo Sports Network Fridays at 8 pm ET/PT, and can be seen on fubosportsnetwork.com as well as at streaming TV partners.